I’m often asked what indicators I analyze when I invest. I do have indicators that I look at for the economy. For investing, I use the valuations and the fundamentals of a company, and technical analysis to help determine entry and exit points.

In terms of the economy, I focus on the following:

Basically our economy is fine, the global economy has improved and this is helping many of our global companies. There are many risks outside our border that most investors are not factoring into their investing. I do write about the global economy and risks toward the end of this report.

Below is the trend of GDP over the last 7 years: 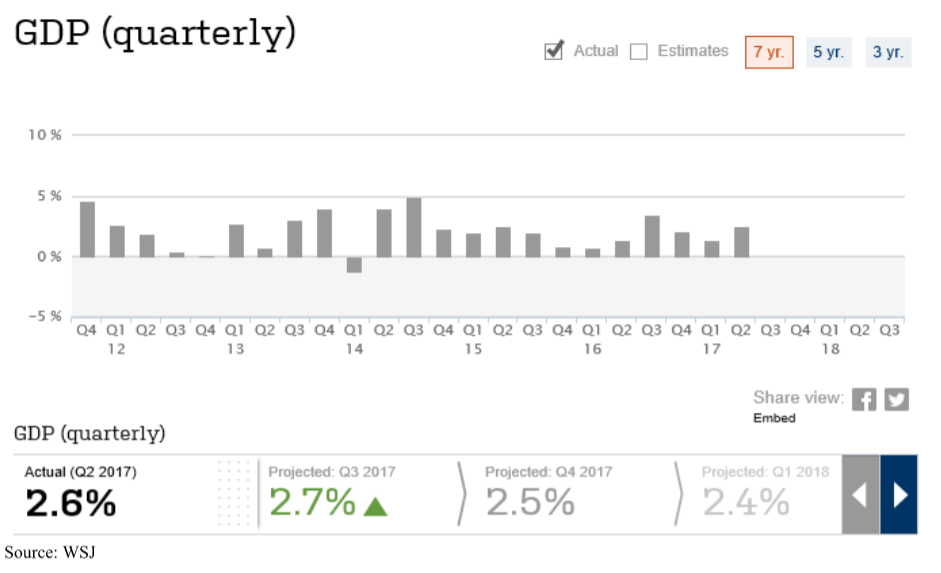 Most economists see the economy this year and next continuing its low growth trend.

Admittedly, economists are not good at calling inflection points in the economy, especially this late in the cycle. Most economic cycles last about 4 to 6 years. We are in the eighth year of this economic cycle.

GDP has averaged a little over 2% this cycle. I’ve written in the past that the silver lining of slower growth is that cycles can last
longer than past cycles because the economy doesn’t overheat, causing inflation and higher rates that slows the economy and many times leads to a recession. 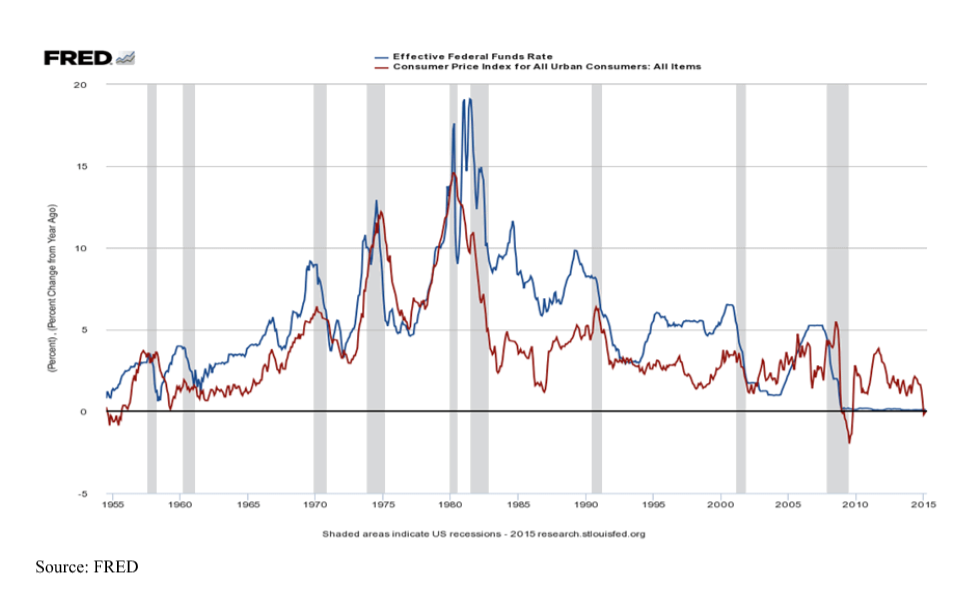 The red trendline is inflation, blue is the federal funds rate, and the shaded area are recessions.

This chart graphically shows how normally our economy and cycles work in the U.S. Again, briefly: the economy heats up; inflation rises;
the Fed raises rates to slow inflationary pressures; the slower economy eventually leads to a recession; the Fed lowers rates to stimulate the economy, and the cycle starts over again. Of course it’s more complicated than this, but it does explain basically the actual cycles shown in the important chart above.

Again, the consumer is about 70% of the economy so it’s important to focus on the consumer.

Normally if there is low unemployment there is better economic growth. We have low unemployment but GDP growth is subpar. Part of the issue is many of the jobs are part-time and there are many that are low paying service jobs in retail, restaurants and lodging.

Here is the trend for unemployment: 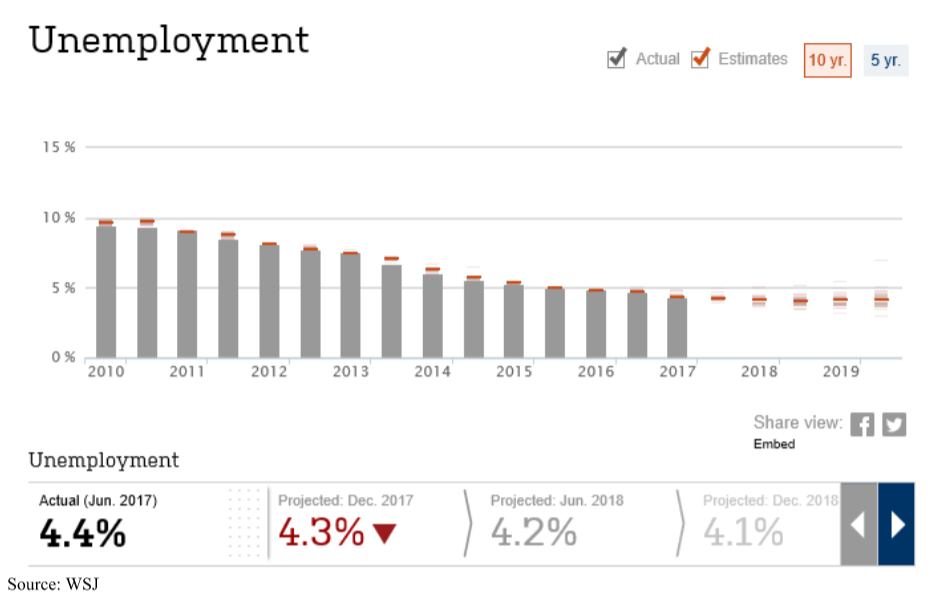 Unemployment has fallen from 10% in 2010 to below 5% the last few years. 5% and below is considered full employment.

Another problem with the employment picture is that companies complain can’t find qualified candidates: 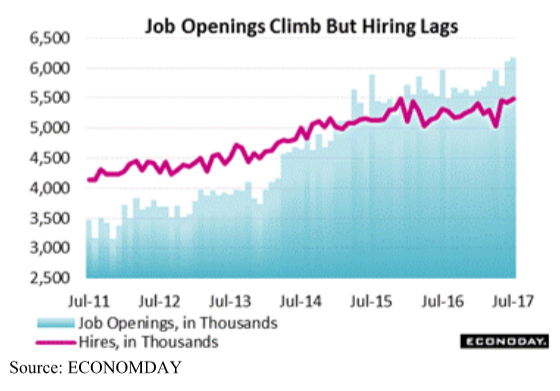 Notice that at the beginning of the cycle there were more applicants than jobs. Now there are more job openings than applicants.

Many jobs openings require higher skills especially in technology and many applicants don’t have the skills needed.

Amazon and online shopping has changed retailing. Just as it changed the way we buy books, CDs/MP3 files, and electronics. Now with Amazon’s purchase of Whole Foods, maybe food, groceries. Below is a chart that shows all the store closing for 2017: 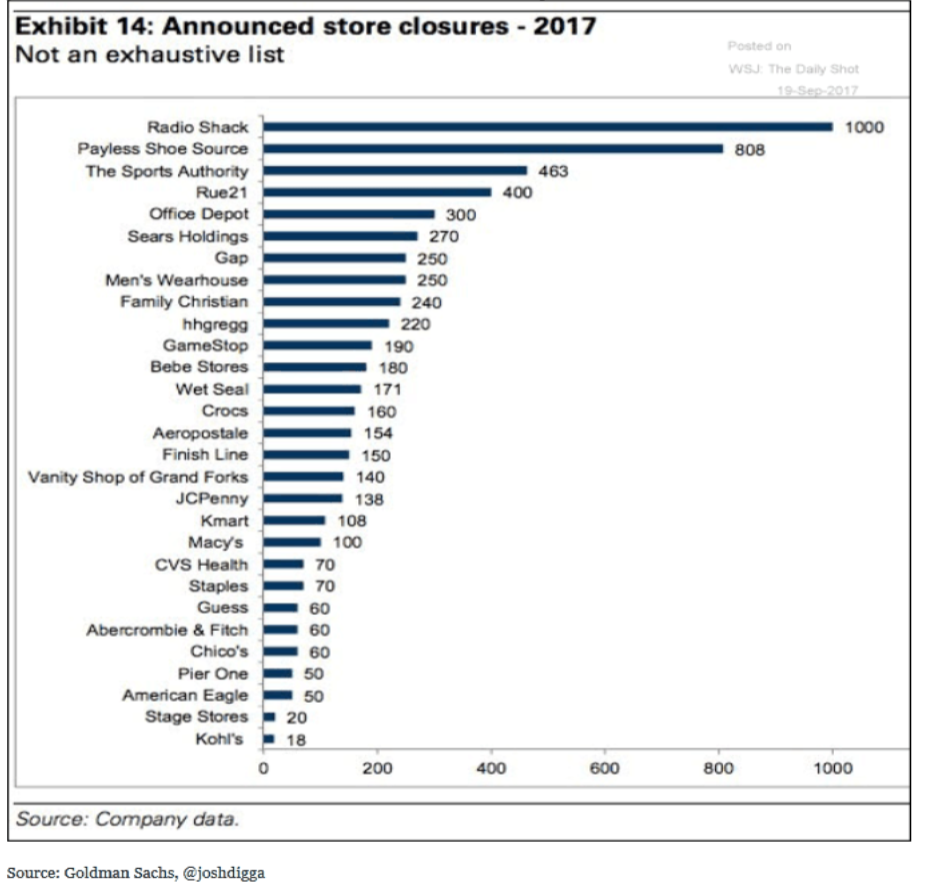 These store closing are bound to impact unemployment.

An oversupply of retail stores across the country is another reason for the store closings.

Here is trend for retail sales: 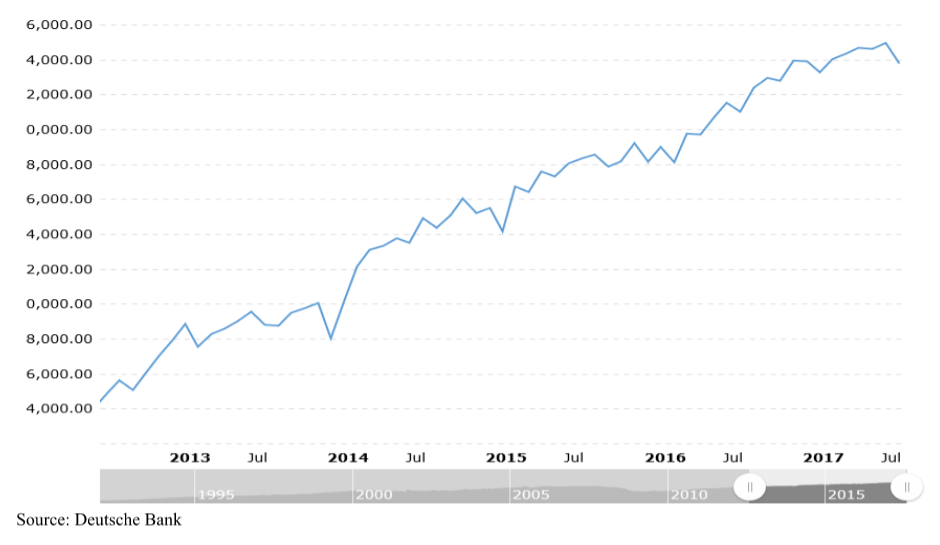 2017 retail trends started strong at the start of the year, but are starting to reverse.

Autos are an important component of the U.S. economy. Below is the trend for auto sales: 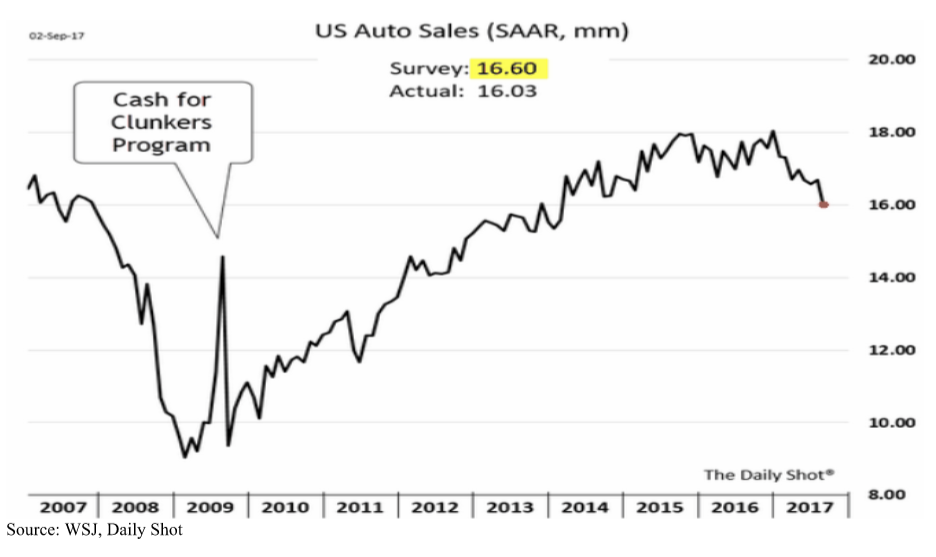 Autos are a weak spot in the economy. Auto sales may tick up in the short-run due to hurricanes Harvey and Irma.

Housing is more important because it impacts financial services (banks and mortgage lenders), home furnishings, and companies like Home Depot.

Here is the trend for housing: 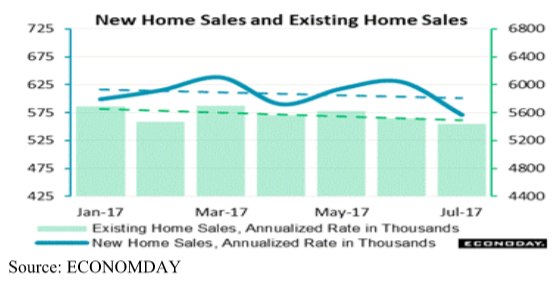 Housing has recovered, but now we can see that housing sales have a slight bearish bias. This will probably continue because of low supplies of entry level housing (without entry level housing, current home owners of these types of homes, can’t sell their homes so they find it difficult to trade up) and higher prices

Affordability is also an issue as the chart below shows: 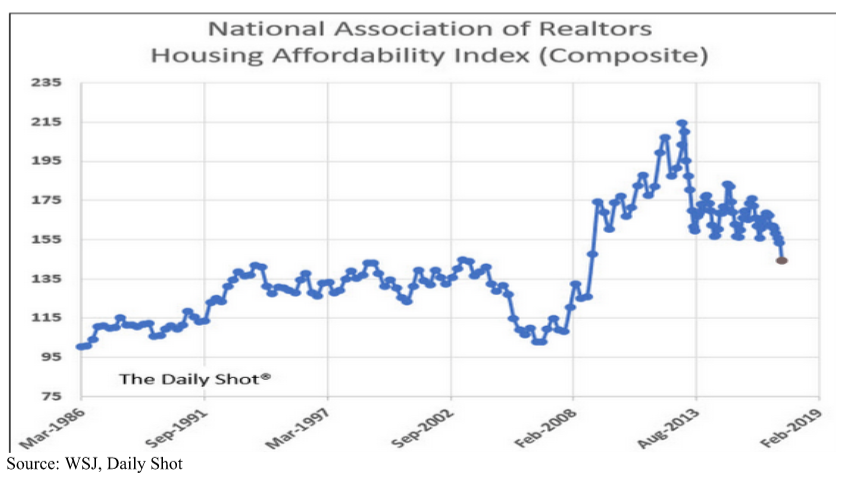 As the chart shows, affordability increased early in the cycle as home prices collapsed during the Great Recession. As the economy improved, housing prices recovered causing affordability to fall.

CPI (Consumer Price Index, aka inflation) has been low this cycle. Here is the CPI trend: 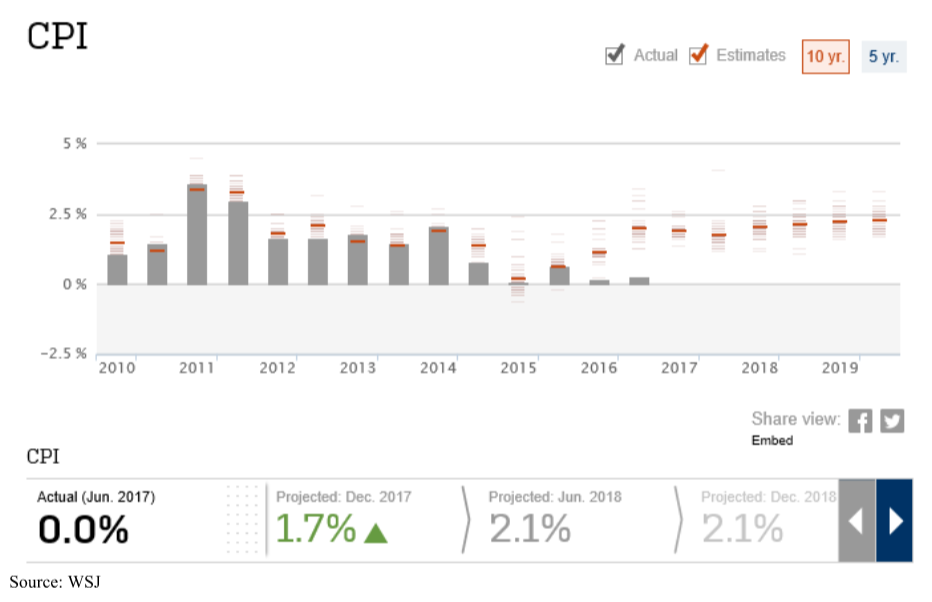 Inflation almost turned into deflation in 2015, 2016 and scared the Fed, as they don’t have a lot of experience fighting deflation.

Because of the Great Recession and low inflation, interest rates are historically and artificially low. Below is a long-term trend of the federal funds rate:

Interest rates went to historical lows this cycle. Also, normally rates reflect inflation, but they did not this cycle because of the
Great Recession. The Fed lowered rates dramatically and had three phases of Quantitative Easing, QE, to stimulate the economy and reflate assets.

The recovery of this cycle was mostly due to monetary policy (Federal Reserve policy and efforts via interest rates, QE and its balance sheet).

Lastly, regarding monetary policy, Janet Yellen’s term as Fed Chair is up in February and President Trump has been interviewing potential new Fed Chairs. The uncertainty of a new Chairperson normally causes volatility in our markets. I will write more about this as we get closer to February.

Because of the change from a strong monetary policy response to finally some fiscal stimulus (lower taxes, higher military spending, disaster relief spending, expected infrastructure spending), the fed is raising rates (notice in the chart above that rates finally started to rise last year ) and will be reducing their balance sheet. Here are the projections for the Fed’s balance sheet:

Before the Great Recession, the Fed’s balance sheet was below $1 trillion. Today it is above $4 trillion. In the last Fed meeting, the Fed announced that they would start to reduce their balance sheet starting in October. When the Fed started buying government bonds, their significant buying lowered long-term rates. Without the buying, bond prices are falling and yields
are rising. This could be disruptive to the debt and equity markets.

As rates are starting to rise, it is attracting foreign investment and this is making the dollar stronger.

Here is a chart of the dollar:

The dollar initially fell when President Trump was elected, but his pro-business agenda gained the confidence of the markets and the dollar rallied.

As the market realized the many challenges facing the new president domestically and internationally, the dollar fell.

The dollar is starting to rise due to: the potential stimulus of tax cuts and reform, interest rates will probably continue to rise and the Fed will start reducing its balance sheet as explained above. The higher rates makes the dollar more attractive and the dollar is attracting foreign investors and speculators.

Employers are having a hard time finding qualified workers. We are starting to see some wage inflation.

The outlook for the major economies of the world have improved over the last few years, but they are expected to slow next year and most economies are growing less than 2%. The global economy is improving, but growth remains anemic for most countries.

Risks Outside Our Borders

Our economy slowed in 2011 (Japanese triple tragedy, Arab Spring, Grexit), and 2014 (the Chinese shift in economic direction caused a crash in commodities, and many resource based economies went into recession) due to economic events outside our borders. Risks remain outside our borders. The biggest risks our economy faces include:

Tensions between Iran and the U.S. have been in existence since the 1970s when they expelled the Shah of Iran who they hated. Iranians blame the U.S. and the West for installing and supporting him. Will the Iranian threat be eliminated during this administration? I doubt it.

Iran is a theocracy and some believe they are trying to hasten the coming of Iman Mahdi, an end of times theology. This theology is hard to fight and eliminate. They do have nuclear weapon ambitions and would like to use these weapons against Israel and the U.S.  Also, they have  threatened to cut off oil shipments (about 20% of global supply) from the Persian Gulf and the Straits of Hormuz several times over the years.   There have been naval Iranian and U.S. skirmishes in the straits going back to 1988. Oil supply disruptions caused by the Iranians could be very disruptive to the global economy.

A nuclear deal was reached in 2015. Countries involved in the negotiations include England, France, Germany, Russia, China and the U.S. The essence of the deal was to get Iran to curtail its nuclear weapons programs over a 10-year period.

President Trump has called the agreement “the worst deal in history” and has threatened to tear up the international agreement, and decertify the deal. These comments by President Trump and his closer ties to Saudi Arabia and Israel has caused Iranians to threaten to continue its nuclear efforts. Last month the Iranians tested a ballistic missile.

I consider this a greater threat than North Korea because it has been simmering longer and ideologies and theologies are hard to change.

North Korea has been a thorn in our side for several decades. They do have nuclear capabilities and they have been advancing their missile technologies. Once they marry both, they will become more dangerous.

North Korea’s modus operandi is basically extortion. They threaten and launch missiles, and then ask for money and resources.

They will continue to make these threats for food and resources, but they also don’t want to give up their nuclear ambitions. If
these demands are met, then the threats will go away until they need money and resources like they’ve done for the last few decades.

Long-term compromises could probably be made between South Korea, North Korea and China.

If one studies what causes recessions it is normally too much debt and bad allocations of capital. This is the case for China. China has about an $11 trillion economy with debt of about $25 trillion.

Much of that money was to build cities, apartments that weren’t needed but was meant to put people to work. Savings are going into real estate causing bubbles.

We need to keep our eye on China.

Although ISIS and Al Qaeda are much smaller and less potent, other Islamic extremists, and lone wolf terrorists pose risks to the major developed countries in the world including the U.S. Again it is hard to defeat
ideologies and theologies.

The U.S. continue to have cyberattacks from Russia, China, Eastern Europe….

Equifax, the Security Exchange Commission, the National Security Agency are a few of the latest victims.

This will cause the government, corporations, and consumers lost time and resources to combat these threats.

Black swan events are events that are low probability but they have a high impact on economies and the markets.

These have happened in the past (911, Great Recession, natural disasters…) and we can expect them to happen in the future.

What should investors consider? The markets are overvalued and do not discount the many risks the economy and markets face. Lowering risk by reducing stocks that have high debt levels, high betas and P/Es. Raising cash for the next cycle makes sense. There are beaten down stocks that investors can start building positions in. Some trading of stocks that have established defined trading ranges is another way to make money in this tricky market.