For many reasons, I did not think the market would be doing as well as it has. Last year I wrote that the U.S. economy was fine, it was the rest of the world that is the concern.

For many reasons, I did not think the market would be doing as well as it has. Last year I wrote that the U.S. economy was fine, it was the rest of the world that is the concern.

Many of the listed concerns above could lead to a global recession.

Because we are in the late phase of an economic and market cycle, and because risks of trade and military conflicts are possible, the markets could reverse suddenly and violently. This could happen at any time. Investors need to be vigilant and disciplined.

Most of us we’re very surprised about the election results. Most investors are very enthusiastic about the pro-business, pro-growth administration. Because Republicans control the Presidency and both houses, there will probably be tax cuts, infrastructure and military spending, deregulation, and repatriation of corporate profits overseas. All this could be stimulative. We don’t know what and when these stimulative laws will be passed and implemented. I will analyze and write about these proposals in an upcoming research reports.

I’m also very concerned about the parabolic moves in the market based on expectations of fiscal stimulus. Looking at an example justifies my concern: 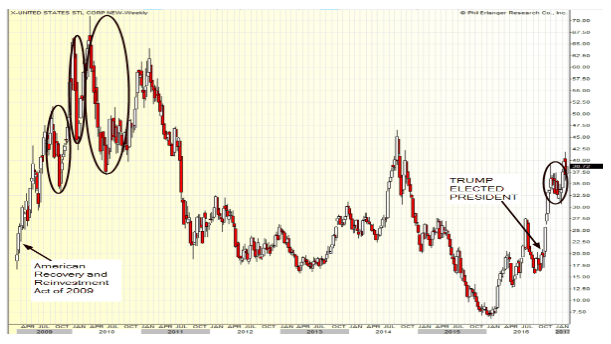 In February 2009 the $831 billion American Recovery and Reinvestment Act of 2009 was passed. There were provisions in the law to make sure that any infrastructure spending must include American companies, workers and materials.

The lesson: Parabolic moves are hard to sustain, and can easily reverse.

Because of the probability of economic stimulation, our economy will probably remain positive, but those prospects are in stock prices. Again, I will write about the stimulus proposals. We are learning that some of the proposals are meeting resistance from Democrats and some Republicans, and will take more time to craft the legislation and to get it passed by both the Senate and Congress.

I tend to be a contrarian, and although many investors are very bullish, I believe they are not including some of the head winds and risks investors face. This includes many concerns that the new President has caused (insulting domestic and international friends and foes, gaps between his statements and reality, questions about his and his team’s relationship with Russia, the ideology of Steve Bannon his top strategic advisor….).

When things change so should our investment strategy. Admittedly this is one of the trickiest, mature cycles I’ve invested in.

My new strategy is based on:

All of the above will make the markets volatile, and we will probably start a new higher trading range once a new resistance is made.

In my last update I provided the chart below: 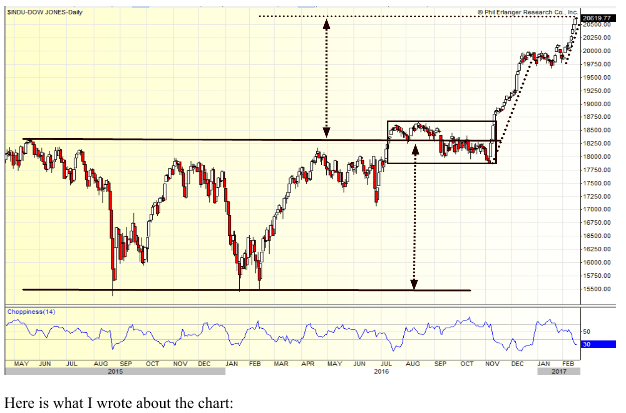 When you see parabolic moves, it is normally a sign of speculation. The almost 90 degree trendline will be easy to break causing a sell signal, so these speculators will take profits or sell to minimize losses. These parabolic moves are difficult to sustain.

It’s also important to point out that earnings for 2016 were up about 4%, but most markets were up over 10%, and some much more. When the market moves up more than earnings, this normally means that the market borrowed performance from the following year. So, 2016 performance borrowed from 2017. Another reason why we will probably trade in a new higher trading range once a new resistance is found. 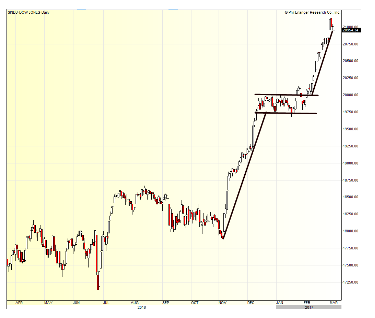 The parabolic moves in the market, Dow 30, are mostly due to expectations of tax cuts, infrastructure spending, and deregulation. The last 300 point move with a gap was due to a widely praised State of the Union Message by the President. We don’t know what and when the President’s proposals will be enacted. The market has gotten ahead of itself, with many unknowns.

These trends will be very easy to break. Once the trend line is broken, it will create a sell signal and there will normally be a retracement of the move.

Personally, I’ve kept some of my dividend stocks and I’m writing options (collecting cash) against them, when they get overbought and overvalued.

I’ve also been selling puts and collecting premiums, cash that are in bear markets, and are basing, and have above average dividends. Below is an example, Occidental Petroleum, symbol OXY.

OXY is not a recommendation, and is only for educational purposes only. Once you invest in a company you must monitor, and then know when to sell. I will not issue updates on the stock, or issue a recommendation to sell.

The stock found a bottom early last year and has been basing from about $65 to $77. I’ve been trading the basing, trading range including selling puts or buying at $65, and selling at the $75 to $77 level. Quite simply, trade (buy at support and sell at resistance) these type of stocks until the next decline phase and bear market.

The stock pays about a 4.5% dividend.

Debt to equity is one of the lowest in the industry, indicating a healthy balance sheet.

Under the right conditions, their reserves should be worth over $100 billion and the market capitalization is less than $50 billion. The $100 billion does not include their significant chemical and marketing and transport businesses.

The stock is oversold, and in a basing pattern. It is also undervalued with valuable energy assets.

If we go into a recession, the stock could have one more leg down, so caution is still needed.

Again, OXY is not a recommendation to buy. The OXY example is for education only.

Because we are very late in the economic and market cycle, it is inevitable we will have a bear market and recession, so investors should have plenty of cash. Personally, I’m in 80% cash.

The reasons for the high levels of cash:

A long-term holding period should be the strategy once we have a bear market, and recession.

Over the next month I will be issuing research on President Trump’s economic agenda including: corporate, personal taxes, repatriation of corporate profits overseas, infrastructure spending, trade, deregulation.