The Economy, GDP, and Tax Cuts

Below is a chart of the trend for GDP: 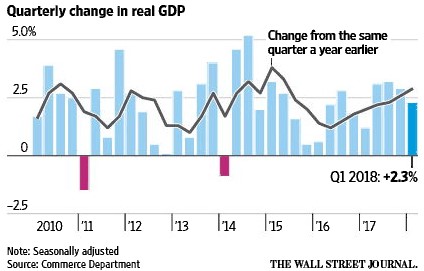 Growth has been uneven this economic cycle. There were several quarters where growth is above 3%.

Businesses are enthusiastic regarding this pro-business administration, and they are taking advantage of their tax cuts. 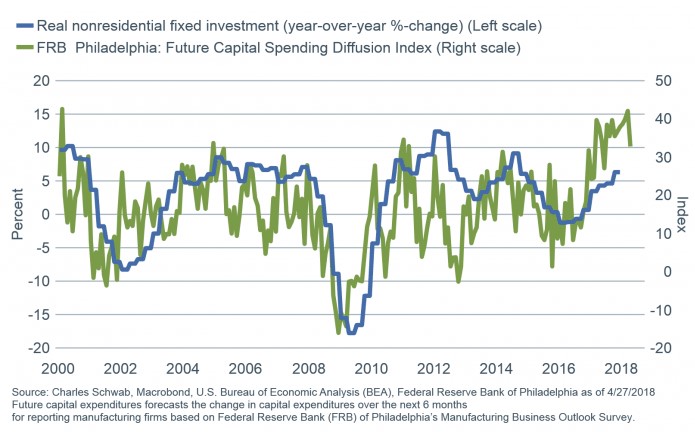 Capital spending did rebound and are at the highest since 2000. Future capital spending looks like it may slow down and a few of the reasons are the uncertainty regarding the potential of trade wars with many of our trading partners, and geopolitical concerns, rising interest rates.

Corporate profits have been very strong. I do analyze earnings in my monthly market updates. Click here to read my last market update.

Below is a survey regarding how corporations may spend their tax savings: 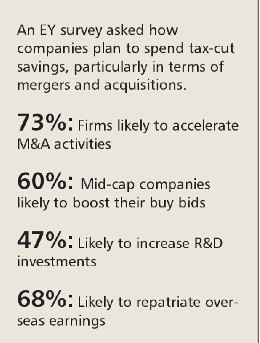 Unfortunately the list does not include more hiring or pay increases for employees. More M &A could help stock and market prices. The survey does say that 60% of mid-cap companies will buy back their stock.  Buybacks are accelerating and not just mid-cap companies but also S & P companies: 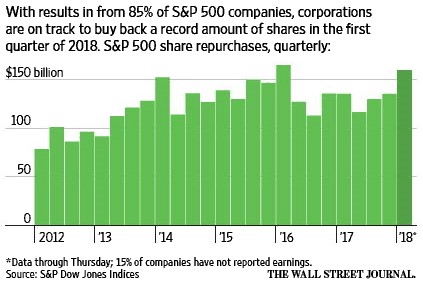 This is not capital well spent; buying back stock at the end of a cycle with tax cuts that will cause huge deficits is not wise. It would be better for companies to buy back their stock at the beginning of a cycle when stock prices and valuations are low rather than late in the cycle where valuations and prices are too high. The chart below shows the high and low of this cycle. 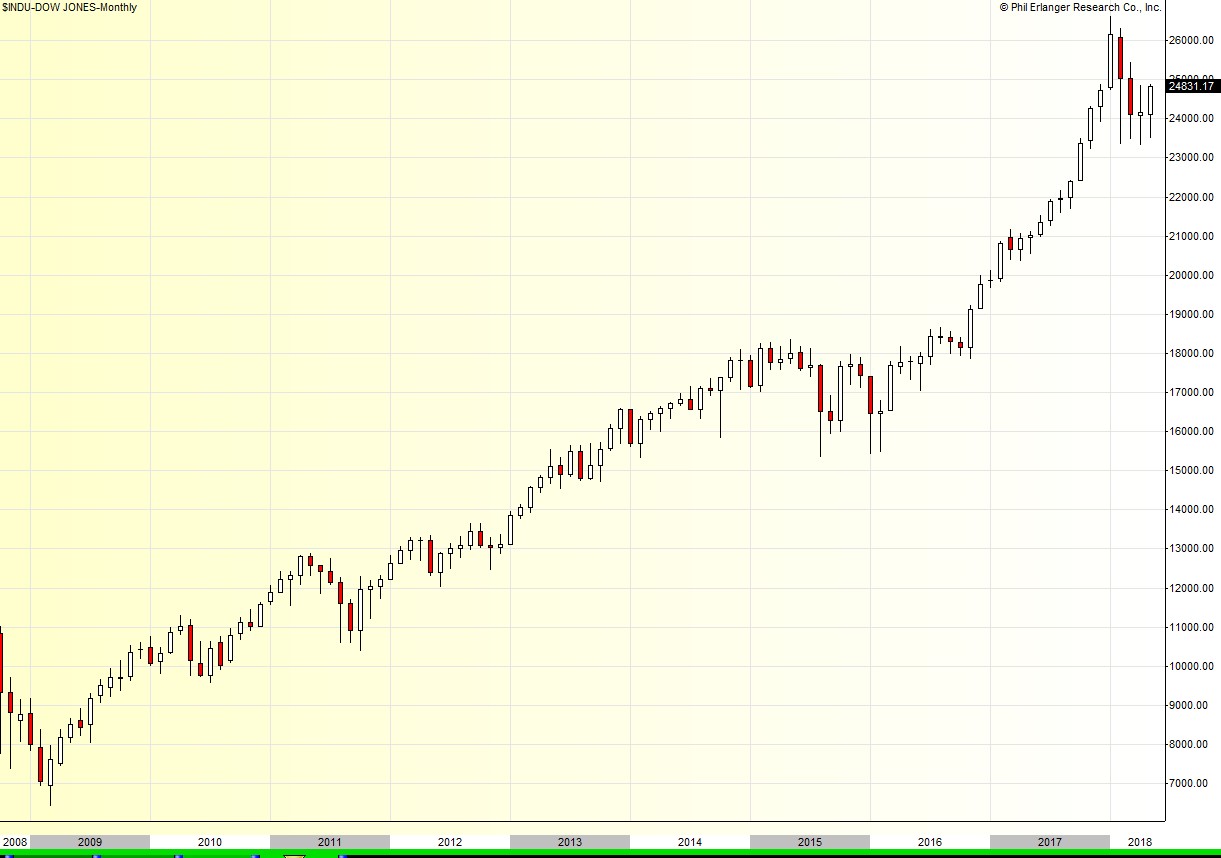 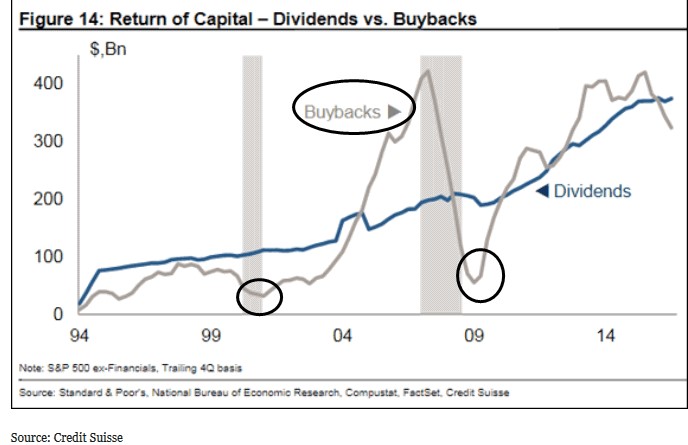 Buybacks tend to be low at the bottom of economic and market cycles and peak near market tops. The buybacks could give support to stocks and the market. It would be better for companies to postpone their buybacks until valuations and prices are lower.

I did write about how tax cuts to corporations have a small multiplier effect on the economy and using tax cut savings to buyback stocks is one of the reasons why. Below is a chart that shows the multiplier effect of different monetary policies: 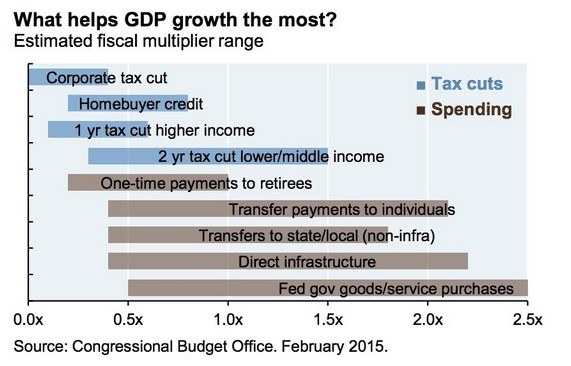 As the chart above shows, corporate tax cuts have the lowest multiplier effect, and infrastructure and governments spending has the highest impact, if there is wise capital allocation. Click here to read my research report on Trumponomics and Tax Reform.

The other problem with the tax cuts is without cuts in government spending there will be ballooning deficits that will add to our significant federal debts. 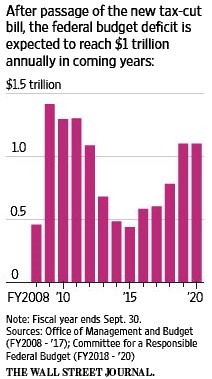 If we go into a recession, tax revenue will fall and unemployment insurance will rise and deficits could explode.The deficits need to be financed by issuing more treasuries. 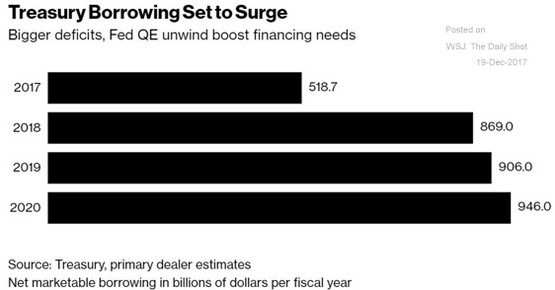 To attract investors, rates will probably have to increase and the huge financing needs could crowd out other borrowers including state and local governments and corporations.

Since the consumer is the largest component of the economy, let’s review a few important data points regarding the consumer.Unemployment has improved during this recovery: 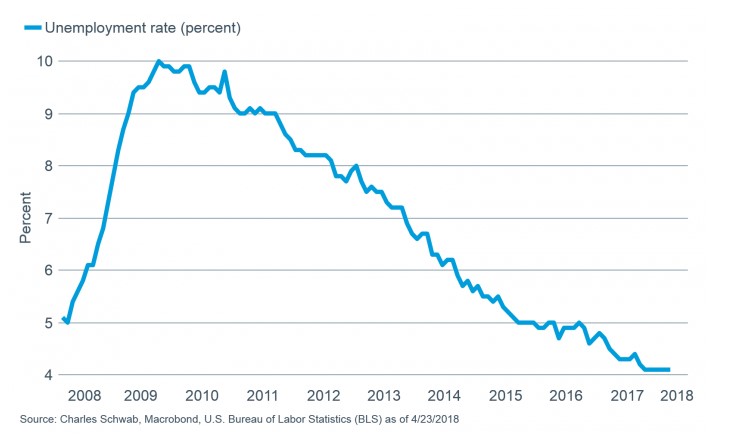 We are at full employment and some economists are worried about wage pressures that could increase inflation.  We do have tight labor markets: 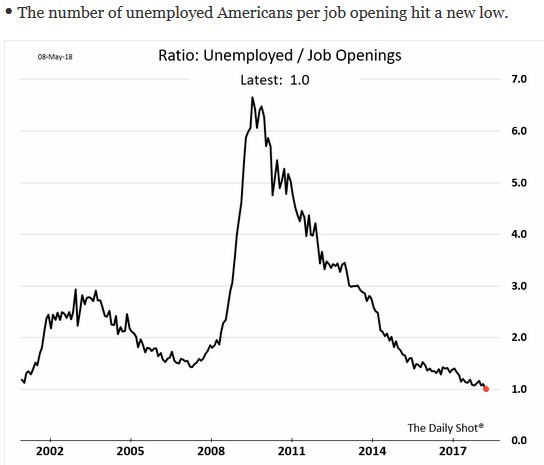 At the start of the Great Recession, there were about 7 applicants for each job opening. Now the ratio is about one to one, a dramatic improvement. 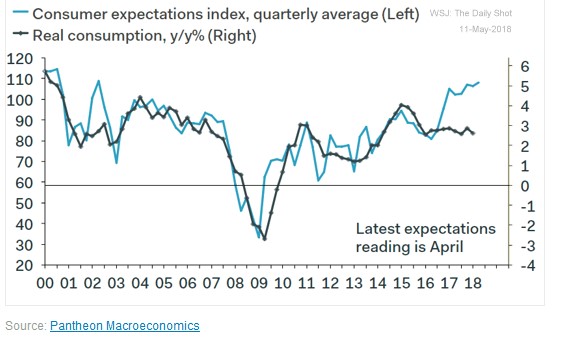 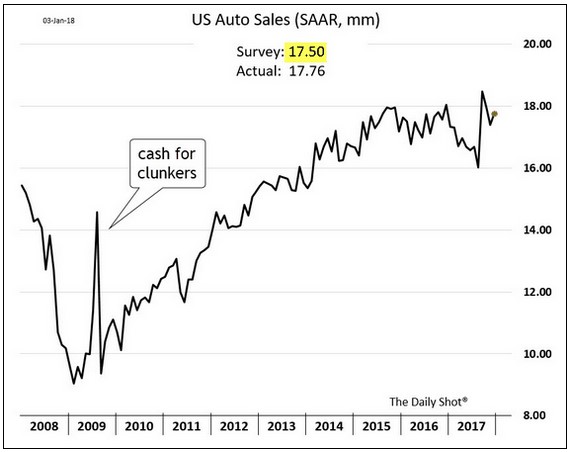 Auto sales have stalled since 2015. There was a surge in auto sales after the election, but the trend has stalled again.

The savings rate has dropped to a low for this cycle, and this could be a problem if we go into a recession: 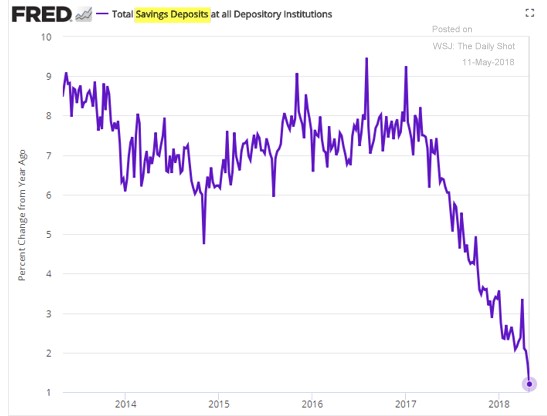 If we get into economic trouble, a low savings rate would make it difficult for consumers to adjust economically.

The average historical inflation rate is about 3%, and it has been below that for much of this cycle: 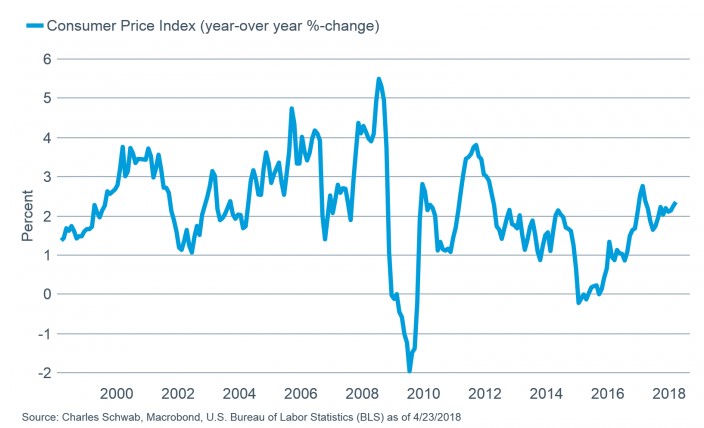 There are inflationary pressures from a tight labor market (see employment trend charts on pages 6, 7). We are also seeing much higher oil prices that could also put upward pressure on inflation. 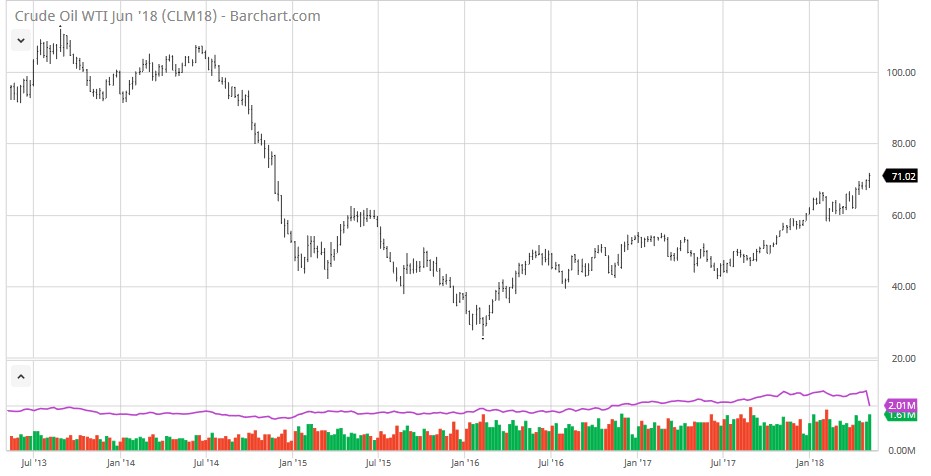 WTI (Western Texas Intermediate) oil prices bottomed in 2016 and have more than doubled to around $70. Brent crude, considered the foreign oil benchmark, is about $80. The reasons for the rise in oil prices include: 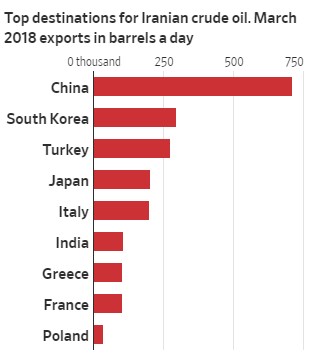 The last time sanctions were placed there were difficult and lengthy negotiations to get nations to not import Iranian oil. I doubt some of these countries will be on board to cut their Iranian oil imports again.

The dollar has been rising, so this could be good for keeping inflation low as a higher dollar means the dollar can buy more foreign goods and services. 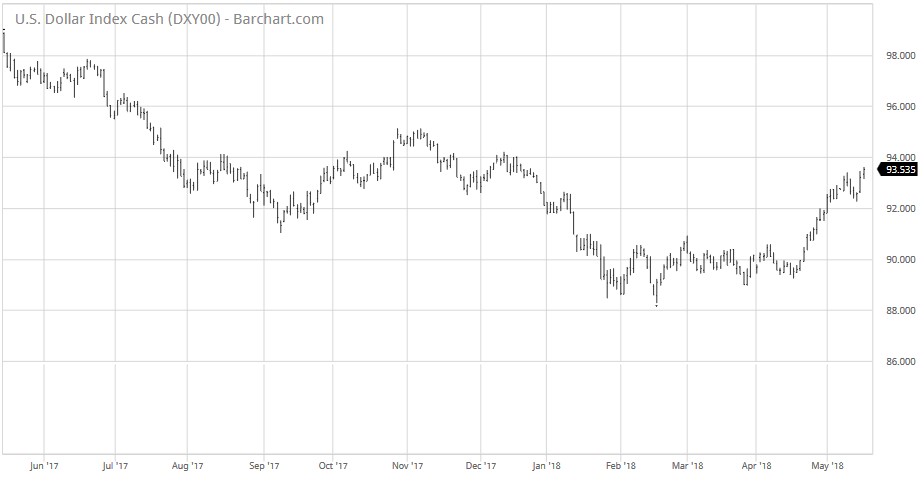 There have been 6 Fed Funds rate hikes since late 2015. There will probably be more. Below is a chart that shows the trend of inflation and the Fed Funds Rate. 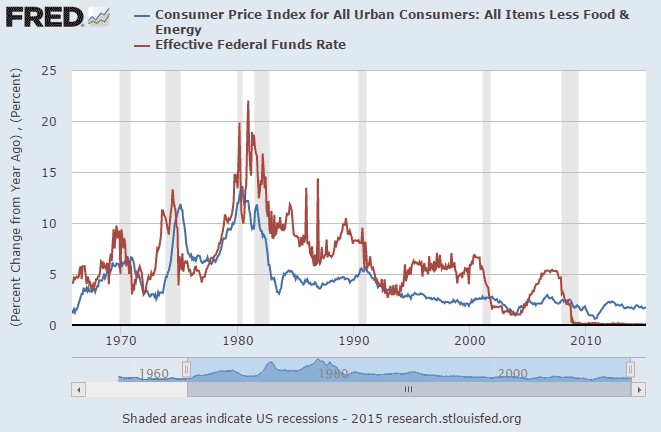 Normally all interest rates reflect inflation. Notice the chart above that the Fed Funds (red trend line) rate is normally higher than inflation (blue trend line) investors demand to be paid at least the inflation rate to protect the purchasing power of their dollar.

Also, notice that since the Great Recession that started in 2008, inflation is higher than the Fed Funds Rate and this is very unusual. Currently the Fed Funds rate is 1.5% to 1.75%; the Fed is trying to normalize rates and also adjust to a rising inflation trend.

The Fed plans to raise the Fed Funds Rate to 3% by 2020. The Fed is reducing its balance sheet of government securities and that could increase long-term rates as supply increases and rates will probably have to rise to attract investors.

In 2014, China was shifting their economic focus from exporting and manufacturing to the Chinese consumer. This caused many commodities to collapse and many of the countries that supplied China with commodities went into recessions. For example, oil prices collapsed from over $100 to below $30 and several oil producing countries went into recessions. Last year many of these commodities recovered including oil (see oil chart on page 10) so we had a global growth synchronous economy.

Below is a chart that shows growth last year and Bloomberg projections for this year: 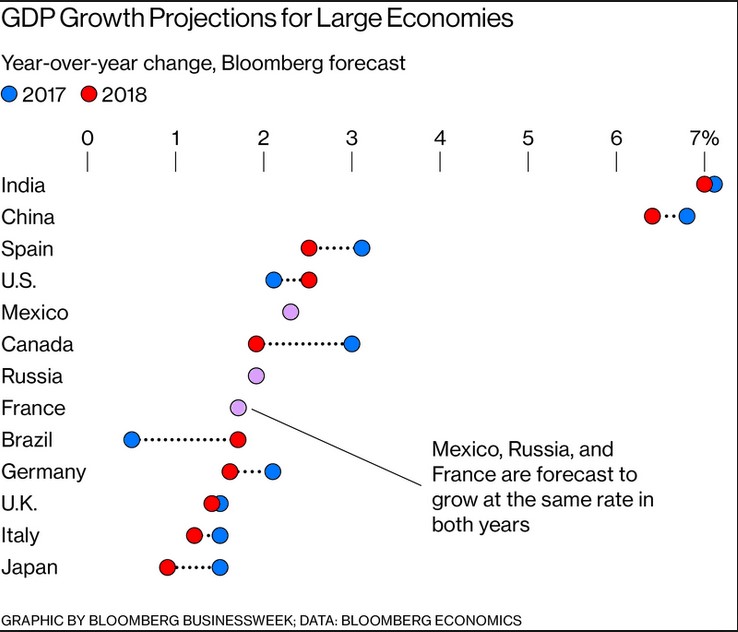 The chart shows there are only two countries that are expected to have better growth in 2018, Brazil and the United States. Trade wars concerns, global central bank tightening, and higher oil prices are some of the reasons Bloomberg economists expect slower growth this year.

There are tail and headwinds for this economy.

Tailwinds include: The economy is growing close to 3%, relatively low inflation, consumer and business confidence is high, housing is rebounding, capital spending is strong, corporate earnings are very strong

Headwinds include: Rising inflation, interest rates and oil prices, concerns about trade wars, potential peak auto sales, global economic growth is expected to slow this year, large deficits in the coming years, we are in the late phases of this economic cycle, and geopolitical concerns e.g. Iran, Syria, and North Korea.

Also, the uncertainty of mid-term elections and more negative news from Mueller’s investigations. There was another guilty plea in May; this time it was Paul Manafort’s ex-son-in-law. Paul Manafort was President Trump’s campaign manager. If the Democrats take over Congress, it will be difficult for this President to continue to pursue his economic agenda, and they could start impeachment proceedings, depending on Mueller’s final report.

These head and tailwinds will keep the markets volatile.

We are very late in this economic cycle and economists are not good at forecasting inflection points. Businesses and investors should be cautious.