Last year was normal for a market in the last stages of a market cycle. Below is a chart that emphasizes last year’s market: 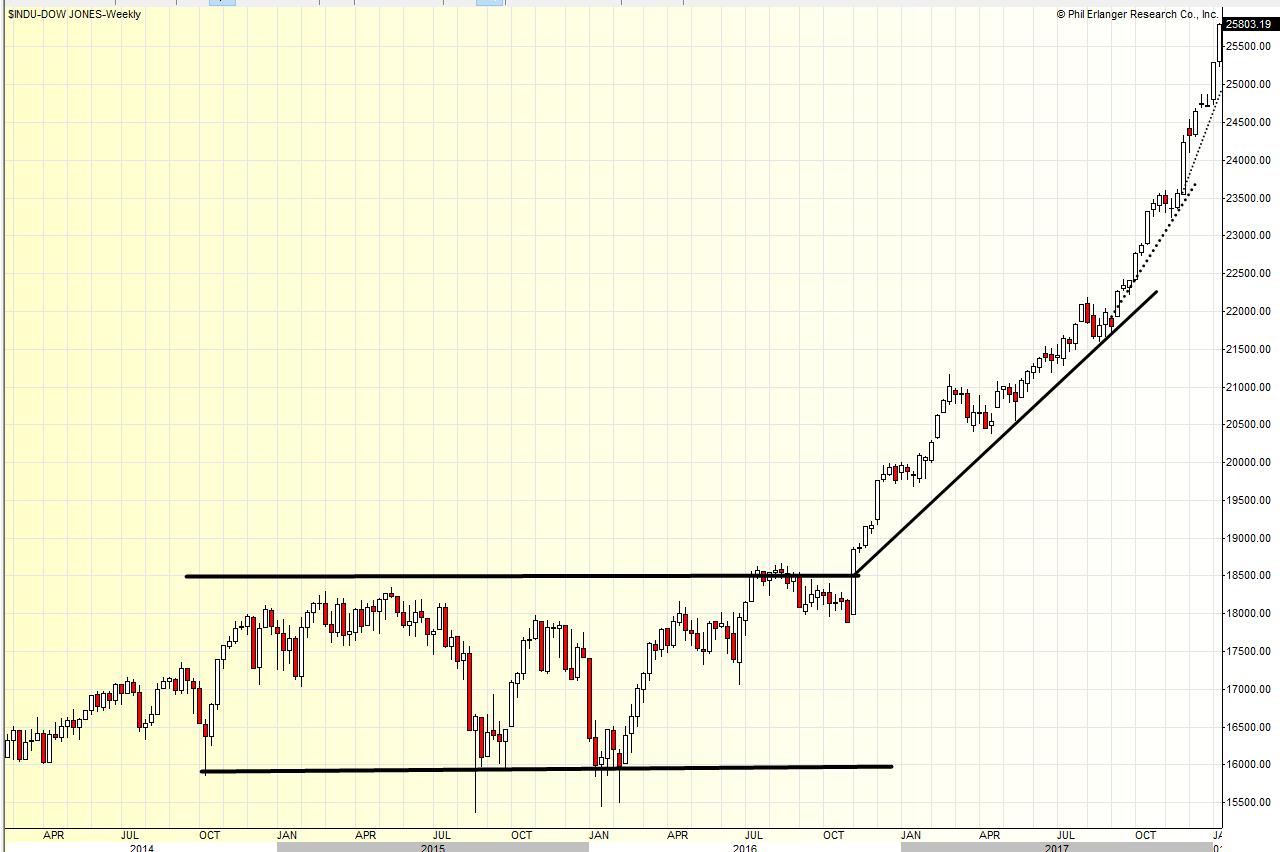 In 2014, China was shifting their economic focus from exporting and manufacturing to the Chinese consumer. This caused many commodities to collapse and many of the countries that supplied China with commodities went into recessions. For example, oil prices collapsed from over $100 to below $30 and several oil producing countries went into recessions. It looked like the bull market could have rolled over, but last year most commodity prices recovered and so did the countries that supplied them. The elections also helped the market, the Trump bump.

Notice after the election, the price trend accelerated, especially late last year (dotted trend lines). The strong market performance was due to a pro-business administration, tax cuts, some deregulation at the federal level, and a synchronous global growth economy.

Another factor that caused prices to accelerate is a normal phenomenon of ‘new highs’ that is normal late in a cycle. After a bear market, it normally takes a few years to reach the old highs. Once prices break to new highs, most of the resistance and supply are gone, and it will be easy for prices to continue to make new highs; there were many new highs made last year.Parabolic, 90 degree moves are not sustainable, like most things in nature.

Parabolic moves are also a sign of speculation. The last parabolic move in late November did not go far and ended in some selling. Investors used the selling to buy. Tax reform was passed in late December, and we had another parabolic move.

Now our economy and markets are facing headwinds.

Our economy is benefiting from tax cuts with job creation and an economy that is growing above 2%•Earnings are expecting to grow 18% to 20% in 2018.

I will discuss many of the economic topics brought up in the bullish and bearish cases e.g. interest rates, GDP, the consumer, the impact of tax cuts.

Bearish Case
Valuations
Market earnings forecasts are out for 2019. Below are the market targets for this year and 2019:

Currently, the markets are close to fairly valued, if earnings forecasts are achieved. Earnings estimates for 2018 have been revised upwards since the tax cuts last December. For the last month, earnings forecasts have moved up less.

For 2019, the markets do have some upside, if earnings estimates are met. It will be important to see what happens to this estimates going forward. I will analyze and write about them in future monthly market outlooks.

Investors must understand that this market is getting old and is in the late stages of a market cycle. Most bull markets last about five years. Below is a table that shows the length of past bull markets: 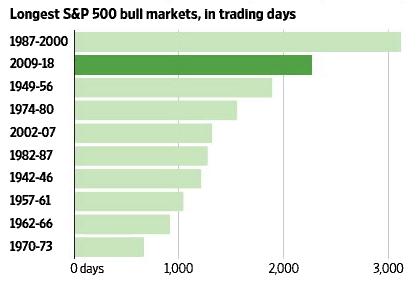 The long length of the current bull market is mostly due to lots of fiscal and monetary stimulus, especially ultra-low interest rates, and an economy that did not overheat and had low inflation. 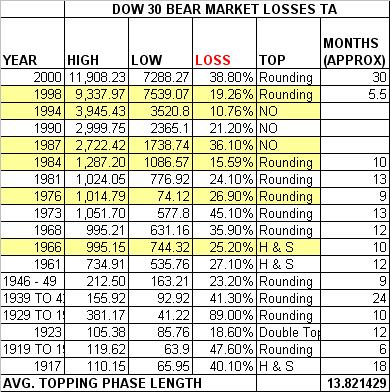 According to my research, most bull markets end with a rounding top pattern. Most market tops last about 14 months.

Here is a current chart of this bull market: 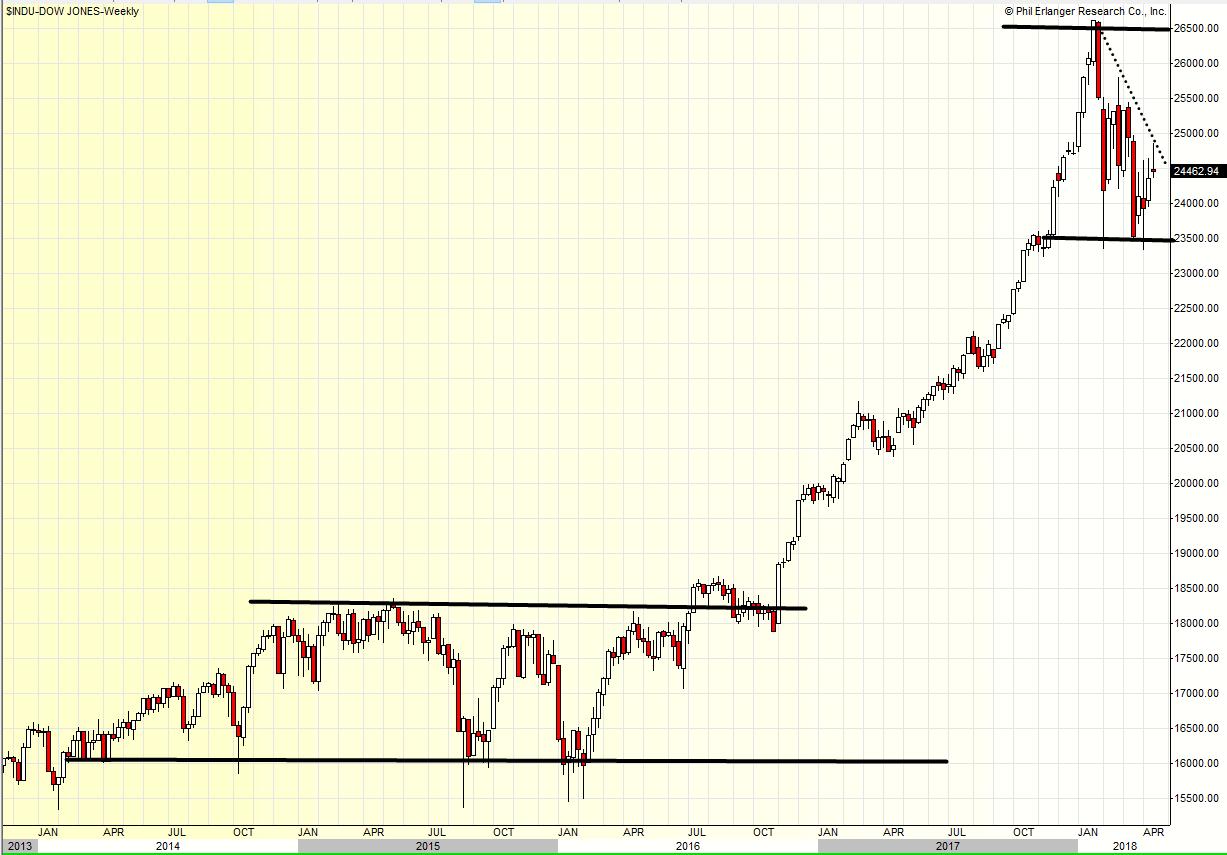 The market got a second wind after the elections. Also, once prices broke out to new highs, its normal to continue to make new highs until a new resistance level has been established.

The 2017 market performance would have been difficult to sustain in 2018. By the end of the 2017 the Trump bump was overbought and overvalued.

As listed above, the market has many headwinds, and the Trump bump has turned into the Trump slump.

In the medium-term, the market is forming a bearish descending triangle. Participants are selling the rallies, dotted trend line. If prices don’t hold support, the 23,500 area, the market could have another leg down.

In my February Market Outlook I included the Apple chart below: 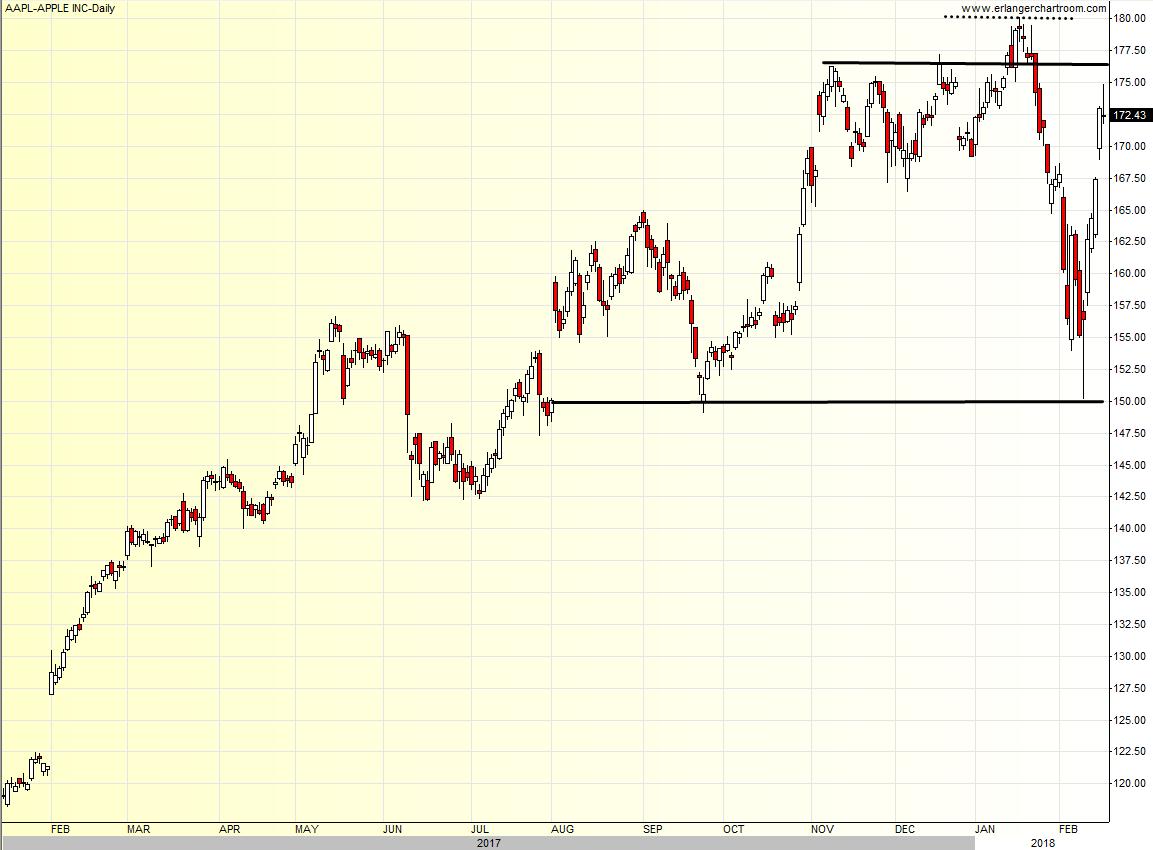 Apple started its topping pattern last July with support around $150 and resistance around $180. I suggested that this would be the new trading range for Apple in my February Market Outlook.

Here is a current chart for Apple: 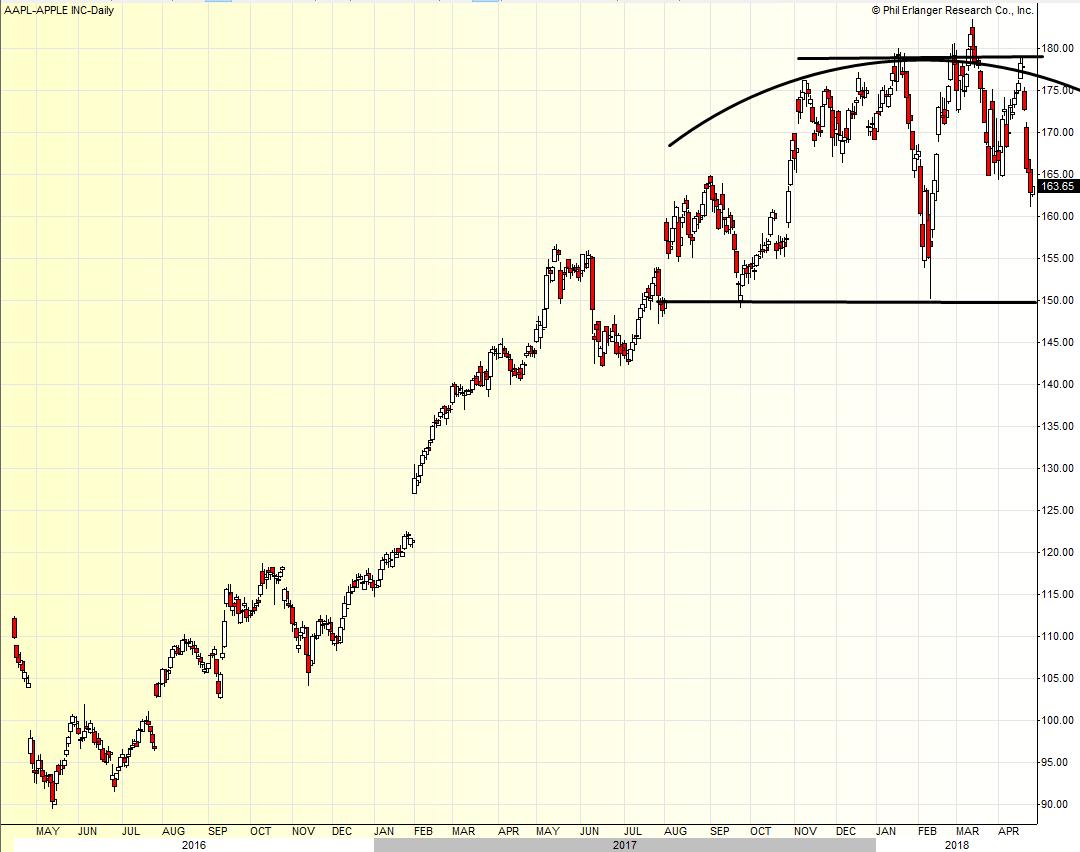 It looks like the major reversal pattern that is developing is a rounding top, also called an umbrella.

We can also look at the ETF QQQ where the top holdings of the ETF include the popular FAANG stocks (Facebook, Apple, Amazon, Netflix, Google). Here is a current chart for QQQ: 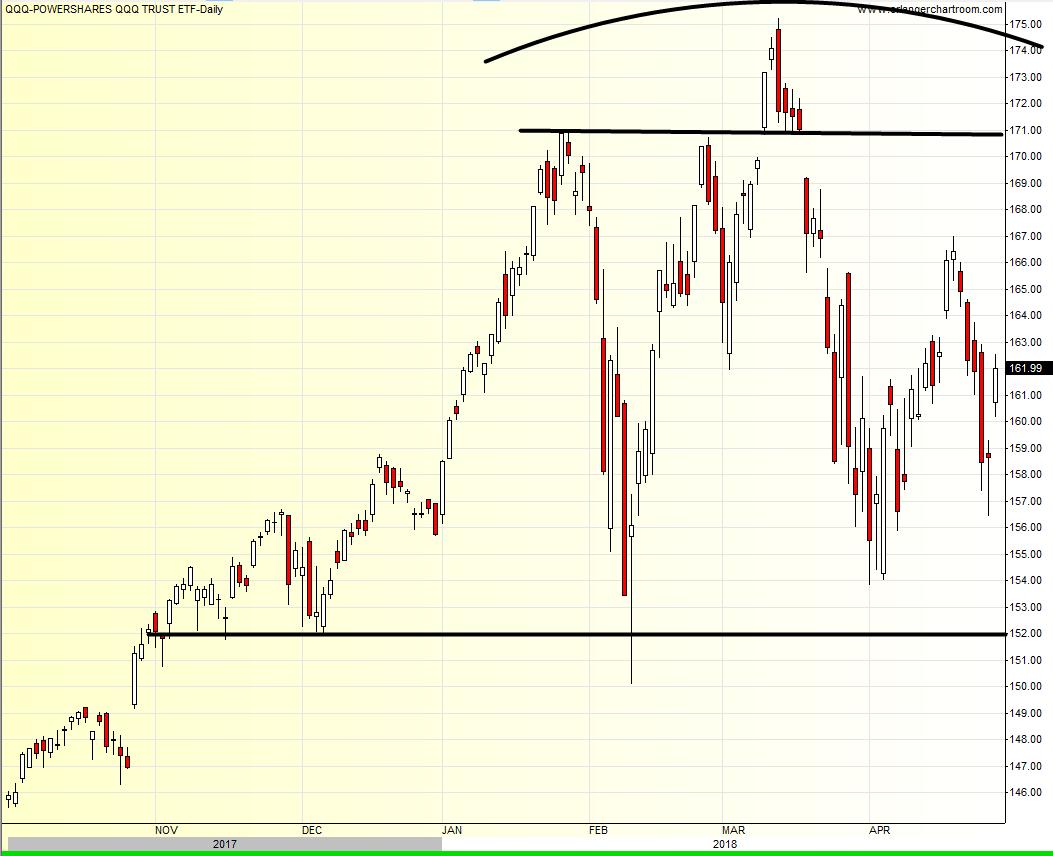 The QQQ does not look as bearish as the Dow 30 chart on page 7.

If prices don’t make new highs by the summer, the 2nd quarter earnings season, there are more headwinds than positive catalysts for the economy and markets. This means the major market reversal topping pattern could turn into a bear market.

I have been buying dividend paying stocks for my retired clients and myself. They were the market leaders for much of this market cycle.

Below is a chart of Kimberly Clark, symbol KMB: 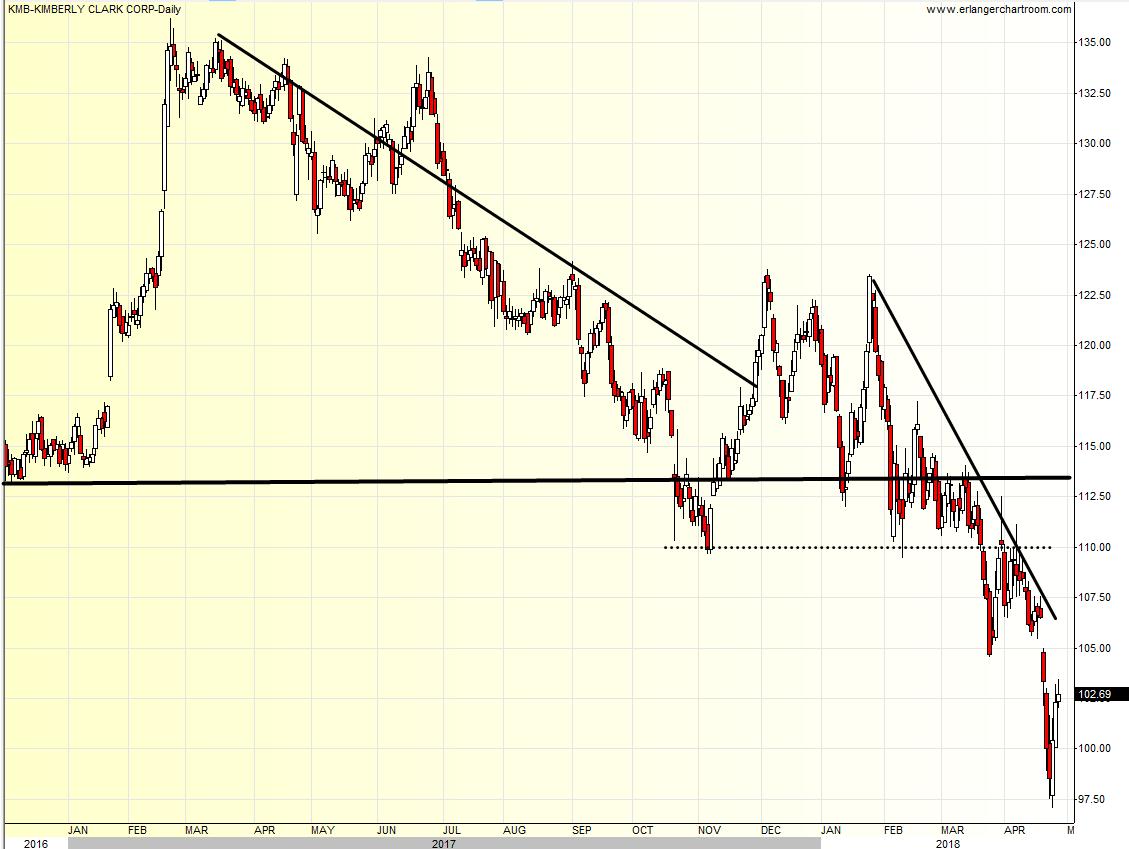 Many dividend paying stocks like KMB peaked last year; KMB is down close to 30% from its peak, bear market territory. The topping pattern took about 13 months, and it broke support last month and had another leg down. These stocks were the leaders in the early part of the bull market, and it looks like they’re leading the markets down.

I will write more about bottoming/basing patterns when the time comes. It’s very rare that after a low is made that it makes a V shaped recovery.

My retired clients did own KMB, but the parabolic move in early February of 2016, and its high P/E caused me to sell. I am starting to nibble at some of these stocks that are in bear markets, but if we do go into a recession we could get another leg down.

If we don’t make new highs by the summer, the markets could break support, topping pattern and turn into a bear market. The causes are listed in the Bearish Case section above.