Economists and their forecasts are notorious for not forecasting important turning points in the economy and financial markets, especially at the end of a cycle. These forecasts are constantly updated, and the updates are probably more important as I can track the trend in the changes: are they improving, deteriorating, or staying the same. This is why I do a monthly market forecast, and a quarterly economic outlook. The outlooks can help us be more aggressive, or more cautious.

The forecasts, estimates below are a consolidation from 2018 outlooks from Barron’s, WSJ, Fortune, BusinessWeek, Charles Schwab, Merrill Lynch and my analysis of economic, business, and investment trends.

Many economists, analysts and myself were surprised to see a rebound in global and U.S. growth. Personally I thought the commodity collapse of 2014 and its impact on slowing the growth of the global economy would continue.

The President did pass major legislation that focuses on large tax cuts for businesses.

Many investment experts and financial planners are telling their clients to invest overseas because U.S. markets are too expensive.

The U.S. economy has averaged about 2% growth for this economic cycle that started in 2009.
The charts below includes an average 2018 GDP forecast from approximately 60 economists:

These forecasts are constantly updated. The red lines are the estimates. The gray columns are the actual growth rates. Again, it’s important to track the change in forecasts.

Most economic cycles last about 5.7 years. If this cycle ends in 2018, this economic cycle would be an unusual 9 years. An economy that has grown 9 years without a recession is a very good thing. 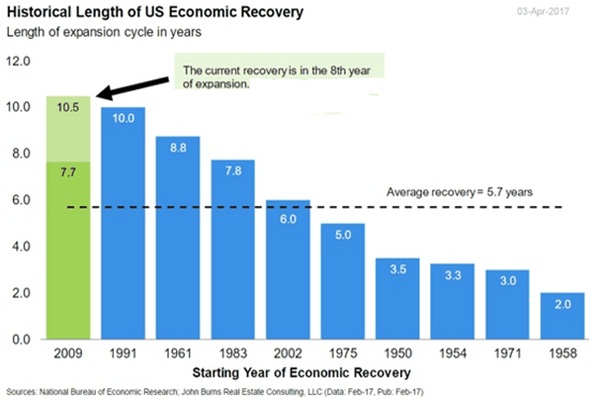 Last month, the President in a speech told a crowd in Missouri that the Republican tax plan would be “rocket fuel” for the economy. The $1.5 trillion tax law was passed and most economists forecast a slight improvement short-term, longer term there would not be a boost but the large deficits and debts from the tax plan could cause economic problems.

A major problem for the tax plan is that it’s a big gamble because the plan is so late in the cycle, and the lower taxes mean less revenue and bigger deficits and debts. The increased financing needs will probably increase interest rates, increase the interest rate costs on the national debt, and crowd out the corporate and municipal debt markets.

In 2017, the total expenditures of the U.S. Government was $4.147 trillion. In 2018, spending is likely to go up to pay for all the natural disaster relief (wild fires in California, Hurricanes in Houston, Florida, and Puerto Rico), an increase in military spending (in 2016 total military spending was about $814.10 billion and will grow to about $916.50 billion in 2019), and more baby boomers will apply for Social Security and Medicare. Spending could grow to about $4.4 trillion.

In 2017, tax receipts, revenue is about $3.46 trillion leaving a deficit of about $688 billion. With the tax cuts, revenue will drop to about $3.36, while spending increases. This means deficits could grow to over $1 trillion. This would be added to our debts. The national debt is about $20 trillion. This would be like taking a pay cut, but you plan to spend much more using your already high balance credit cards.

Below are projections for our deficits: 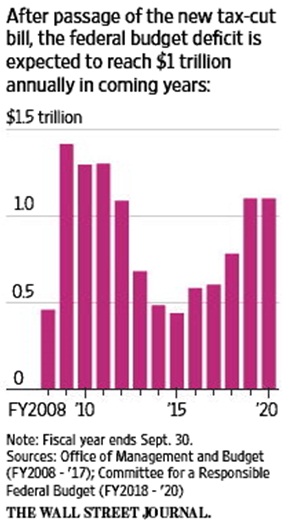 If we go into a recession, we will have less tax revenue and unemployment insurance would cause the deficits to explode, much more than the projections above.

Again, the deficits also mean that we will have to borrow more and this could put upside pressure on borrowing costs because of the growing demand to finance our debts. Here is a forecast of our borrowing needs over the next few years: 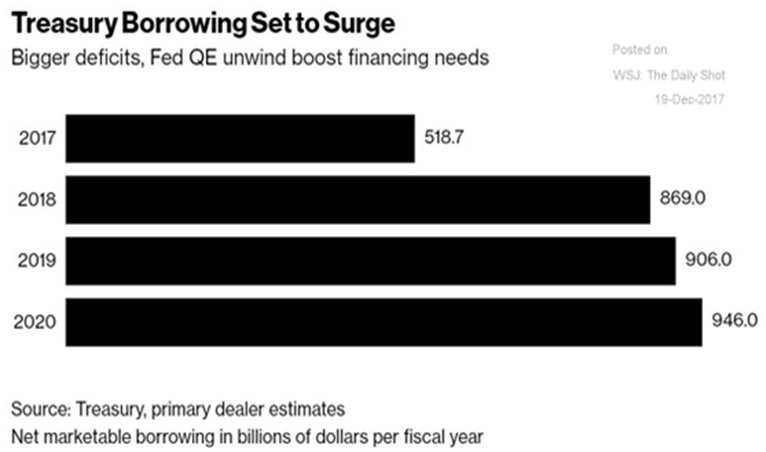 The borrowing needs of the treasury will grow to almost a $ 1 trillion over the next few years.

Tax cut stimulus has not been tried this late in a cycle. Reagan had his first tax cut in 1981, the beginning of the economic recovery of the 1980s (tax reform legislation was not passed until 1986). George W. Bush also got his tax cuts early in the economic cycle of the first decade of the 2000s. If we get a recession (we will eventually, and it will probably be sooner than later) then revenues will decline because of a contraction in the economy, and unemployment insurance will increase and the deficits will probably explode even more. The belief that economic growth will pay for the tax cuts has never happened before and has a low probability of happening this cycle, and most economists agree.

Below is a chart that shows GDP after each tax cut: 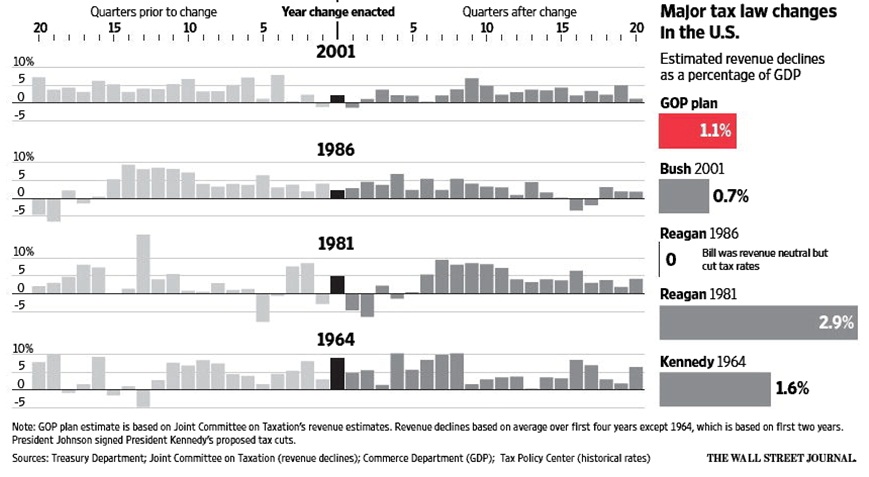 Again, tax cuts impact on the economy is mixed, and it does not have a long-term stimulative effect. Also, notice that as time goes on, the economy gets bigger and growth slows, proving the law of large numbers. In 1964 our economy was about $700 billion. At the start of the 1980s, the U.S. economy was about $2.7 trillion. Today the economy is close to $20 trillion. A $20 trillion economy will not grow as fast as a $700 billion economy.

I did write about tax reform and the economy. Click here to study the report. Below are a few charts from the report that are key to understanding the impact of the Presidents tax cuts and reform. Many of the President’s supporters are anticipating millions of high paying jobs, but the image below shows where the money went in the last tax repatriation in 2004. Some corporations did do some hiring, but there were no pay raises for labor (there were raises for executives). 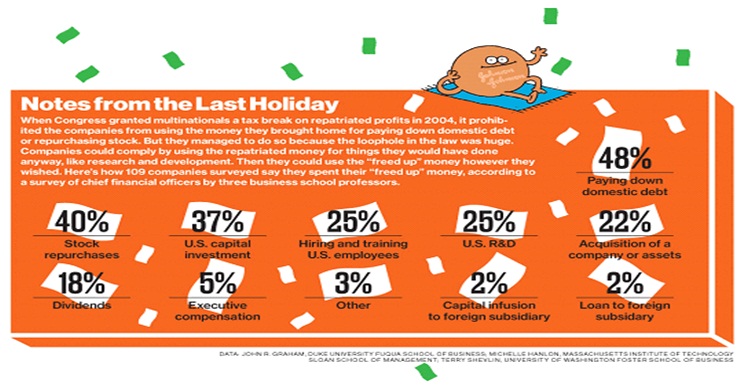 Most of the money was used to help shareholders (share buybacks, raise dividends, pay down debt). Economists know this and understand that the multiplier effect (how many times a dollar will recirculate)  of corporate tax cuts is low. 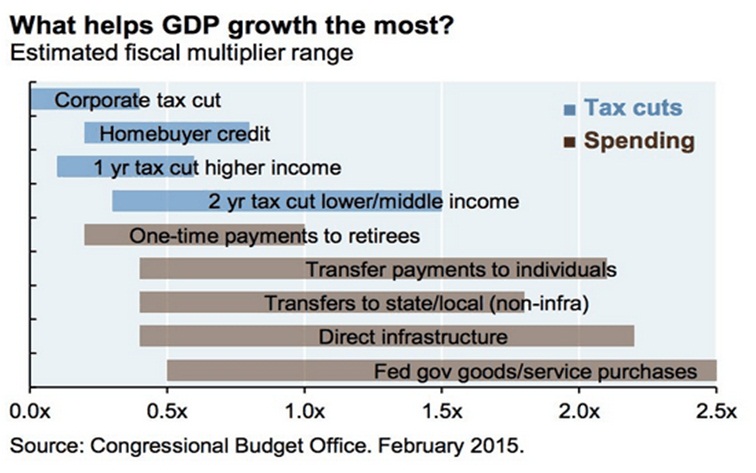 According to the above image, tax cuts have the lowest multiplier effect among fiscal policies. It’s not surprising to see that most economists are forecasting a small increase in economic growth from the tax cuts.

Now is not a good time for these tax cuts because they won’t create the millions of high paying jobs the President’s supporters are counting on. Again, if we go into a recession, and it’s a matter of time, the deficits could explode and our debts will grow.

The tax cuts should help corporate coffers and earnings, more on this in my 2018 market outlook.

Most economists don’t expect a recession for 2018:

As I mentioned above, economists and analysts don’t have a good track record of calling important turning points in the economy and markets. In January 2007, the forecast for a recession was only 30%; in 2009, the forecasts jumped to 100%, when we were in a recession. Admittedly, forecasting the future is extremely difficult.

Recession probabilities did move up in 2016 and fell last year.

Here is the consensus forecasts’ for unemployment:

The unemployment rate fell about 50% since the start of the Great Recession. Full employment is considered about 5%, so we’re at full employment.

Economists expect the unemployment rate to stay at these lower levels for the next few years.

Since unemployment is so low, employers will probably have to raise wages to attract and retain workers. This could put upward pressure on inflation.

Full employment is normally a sign of the late stages of an economic cycle.

Spending is growing in 2017, but its growing faster than incomes.

Consumers are using their credit cards to spend more: 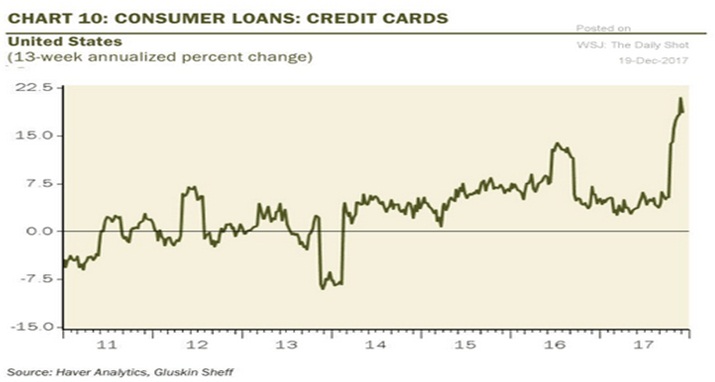 And, the savings rate is falling: 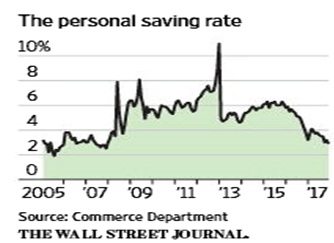 Savings normally spike when there is a recession or economic uncertainty like the 2008, 2009 global financial crises. As the economy and markets improve, consumers have more confidence especially when they see their home values and 401Ks increasing and they tend to save less and spend more. These are signs of the late stages of an economic cycle.

Even though most home prices have doubled since the depths of the financial crisis, home sales are surprisingly strong: 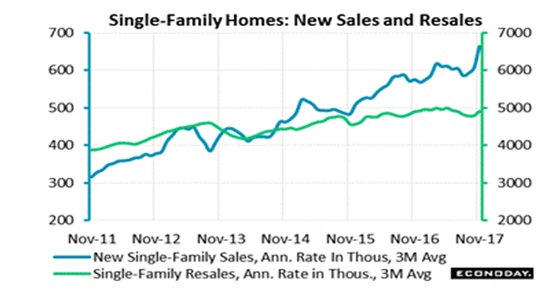 Lack of savings, using credit cards to spend in not sustainable. As always, we will keep a sharp eye on the consumer.

Oil supply and demand are finally in equilibrium. Demand has grown and OPEC has had the discipline to cut back on production.

Below is a global oil supply, demand chart:

Below is the consensus oil price forecast for 2018:

The current consensus forecast for oil is about $56 for 2018. If we have any supply disruptions due to wars in the Middle East, Africa, terrorist attacks on oil fields, labor strikes, oil spills, weather including Hurricanes in the Gulf of Mexico, prices could spike higher.

Below is a chart that shows the trend and 2018 forecast for inflation:

Inflation has been about 2% for much of this cycle, and has been below that the last few years.

Besides rising rates the Federal Reserve is starting to reduce its balance sheet. Without purchases and the supply of government bonds from the Fed’s balance sheet, most interest rates will also rise. Other central banks around the world are expected to reduce their balance sheets.

Rising rates and global central bank balance sheet reductions could hurt global liquidity and be disruptive to the global economy and markets.

Below is the forecast for the 10-Year Treasury:

The U.S. is shifting from monetary stimulus (low rates and quantitative easing) to fiscal stimulus (tax cuts, infrastructure spending, reduce regulations). As I wrote above, this shift could be disruptive to the global economy and markets.

In summary, the risks for our economy include:

I keep hearing on the cable financial news that we have a strong global synchronous economy, and that is one of the main reasons why the bull market got a second wind, and why investors should invest in expensive stocks. But, if we look at the economic growth numbers around the world they aren’t impressive. Most large economies around the world are forecasted to have lower growth next year, smaller and lower income countries are expected to continue to have growth. Below are the global economic trends from the IMF:

As I wrote in the previous section, most major global central banks will begin reducing their balance sheets. This could be disruptive to the global economies and markets, and cause less global liquidity.

Below are some of the risks the U.S. and world faces:

I will have my 2018 Market Outlook posted in the near future.