The markets did well in 2017, and much better than most investors and analysts expected, including myself. My November Market Outlook tried to explain the unusual year. Click here to review the report.

I’m a value and contrarian investor, and every once in a while value investing is out on favor. Currently momentum investing (focus on earnings and price momentum) is more popular than value investing. Value investors try to determine the value of an asset and invest when their undervalued and sell/hedge when an asset is overvalued. The financial media is asking - is value investing dead? This question was also asked in the dot.com craze almost 20 years ago. Let’s assume you have a business you want to sell. Would you use technical/price analysis, or asset allocation to determine the price? NO YOU WOULDN’T. You would use discounted cash flows, or sum of the parts, or a multiple of a P/E or EBITDA to come up with a value for the company. Value, fundamental investing is not going out of style. Hard to imagine that it ever would.

I always provide the bullish case, but lately few people are looking at or factoring in the bearish case. Investors need to consider the bearish case and the risks to this economy and markets.

The industries above should benefit the most from corporate tax cuts. Industries not listed have effective tax rates of 21% or below. 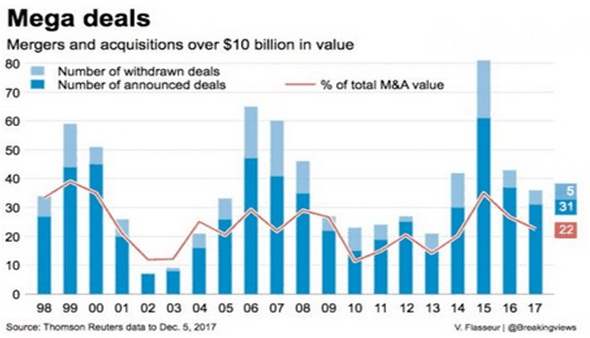 Declining M & A is expected to continue.

Buying back stocks after an 8-year market rally with expensive valuations would not be a good idea for capital from tax savings. 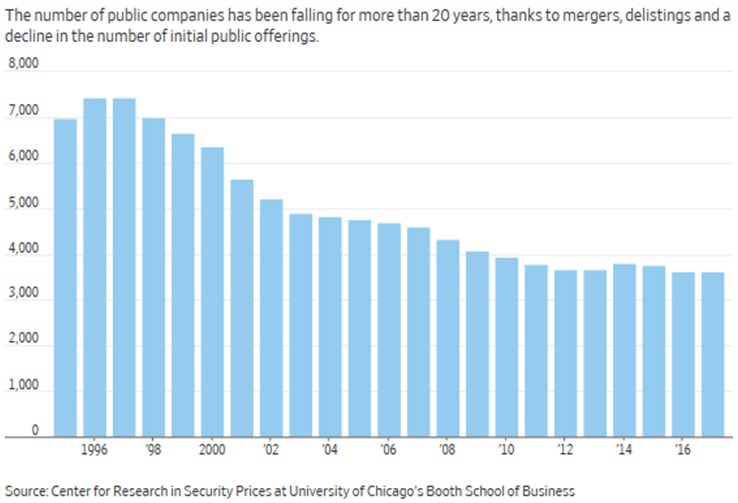 The global growth rates of the major economies in the world are declining in 2018, not growing.

The P/Es for most economies have accelerated, and although they may have lower P/Es than the U.S., they also have lower growth and higher risks: 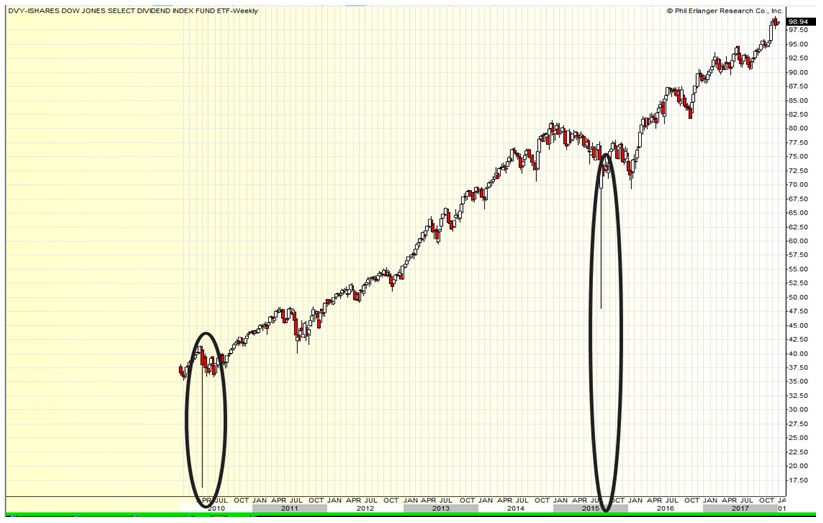 Earnings are great this year, but slow dramatically the next two years. Will the P/E hold up? 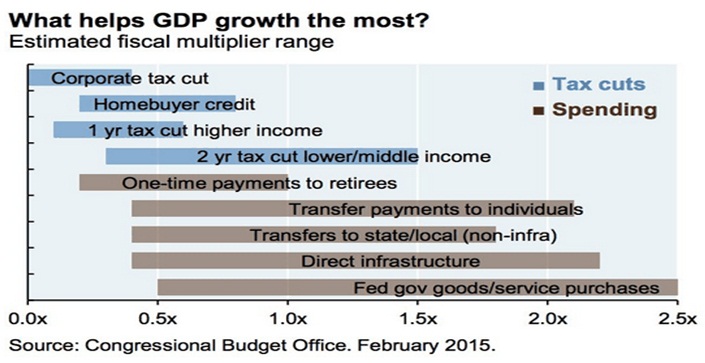 Also, if the tax cuts don’t create millions of high paying jobs (they probably won’t), then the Republicans could lose the House and Senate in November’s election as Trump supporters could become disappointed.

What Can Investors Expect in 2018

No one is expecting a bear market in 2018. There are plenty of bullish forecasters and investors in 2018. Here is a contrarian view that few are considering.
The market will probably be OK until May. By June, investors should start thinking about 2019. There will probably be some headwinds in 2019:

One of the factors investors should consider is how much investors are paying for earnings. Below is a table that shows the trend of the Dow 30s prices, earnings and P/Es for this cycle: 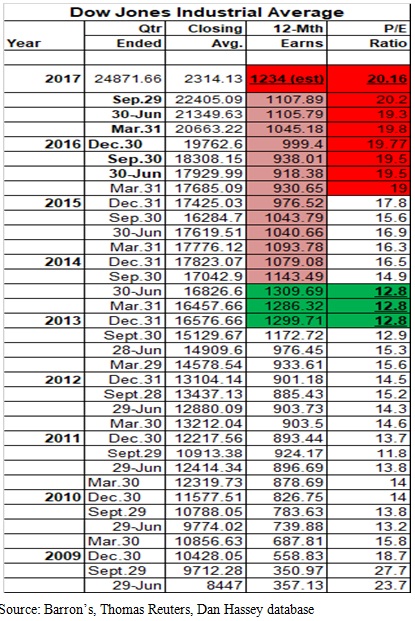 In late 2013, early 2014 earnings grew to about 1300 (4th column) and the P/E (fifth column) was about 13. Earnings went lower because energy prices collapsed, and China shifted from an investment, export and manufacturing focus to a service, consumer oriented economy. This led to a collapse in other commodity prices, and some resource rich countries (Australia, Brazil, Canada…) went into recessions that caused a slowdown in the global economy. Some of us thought that this could be the end of this economic and market cycle.

Earnings did recover to 2013 levels last year, and the P/E grew to 20. Most of the market’s performance has to do with P/E expansion. Why are investors willing to pay $20 for a dollar of earnings today, and only pay $13 for the same level of earnings in 2014?

Analysts have forecasted that earnings growth from 2017 and 2018 are double digits. If we take out the outliers and look at median earnings per share, EPS, forecasts, growth is more like 8%. Below is a table that has last year’s EPS (they are estimates but are probably very close to being the actuals because there is only one more quarter to report) and 2018 EPS forecasts: 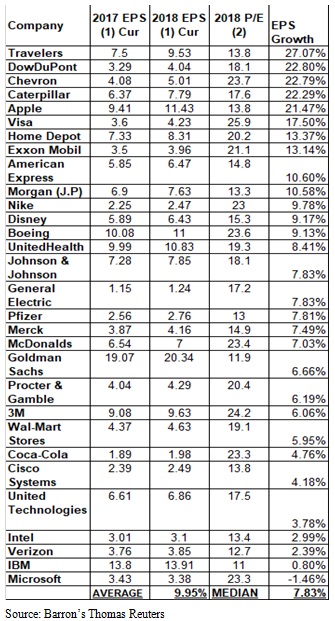 Traveler’s Insurance, symbol TRV, will have the best earnings growth of the Dow 30 for 2018. TRV had terrible earnings last year because of the liabilities from hurricanes and fires. Its earnings are expected to recover this year (a big if, if there are no more major destructive weather events). Apple and Caterpillar were up substantially last year and have probably pulled price performance from last year that could impact price performance this year.

It’s rare that earnings are up about 8% (median EPS for Dow 30) but the indexes are up over 20% like they were last year. Even with the anticipated tax cuts, the performance of the markets are not justified.

Below are my price targets for the markets:

I use a P/E of 16 for the Dow 30 and 17 for the S & P, about the historical average. I’m a prudent, cautious investor in the late stages of cycle and with rising risks and interest rates. If we use a reasonable P/E, the markets are overvalued.

If earnings are met and P/Es stay elevated at 20, then there is some upside for the markets.

Are Tax Cuts Factored in the Markets and Stock Prices?

The above question is often discussed in the financial media. Some analysts and investors believe they are, some don’t.

My answer is earnings might not have adjusted enough yet (I’ve noticed that earnings forecasts have increased about 4% since the tax cut announcement), but prices certainly have.

If we look at the table on page 9, it shows the trend of earnings for this cycle. There was an earnings recession in 2015 and much of 2016. Once energy prices recovered, and the dollar went lower, earnings recovered. Earnings are up about 36% since 2016 but the market is up about 48%. Normally earnings growth and price appreciation are close. Because prices are up more than earnings, prices do probably reflect tax cuts and then some.

I will continue to monitor earnings forecasts and let readers know if earnings are improving or decreasing.

Below is a chart that compares the price performance of high tax rate companies and the S & P: 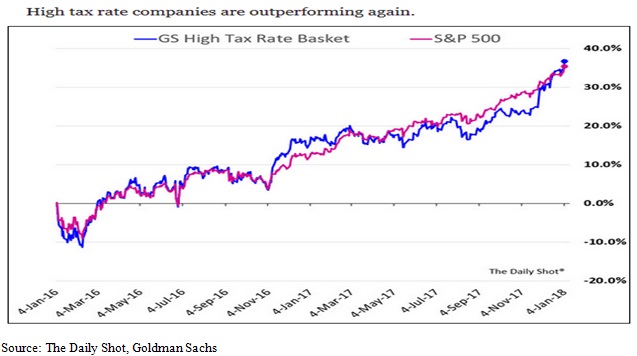 High tax companies were underperforming the S & P for much of 2017, but are now leading. Another example that tax cuts are reflected in prices.

The technicals (price analysis) of this market are bullish, but there are a few red flags.Before I analyze the current market technicals, below is a chart that shows the seasonal tendencies of the market:

The seasonal tendencies of the markets include:

Below is a current chart of the market: 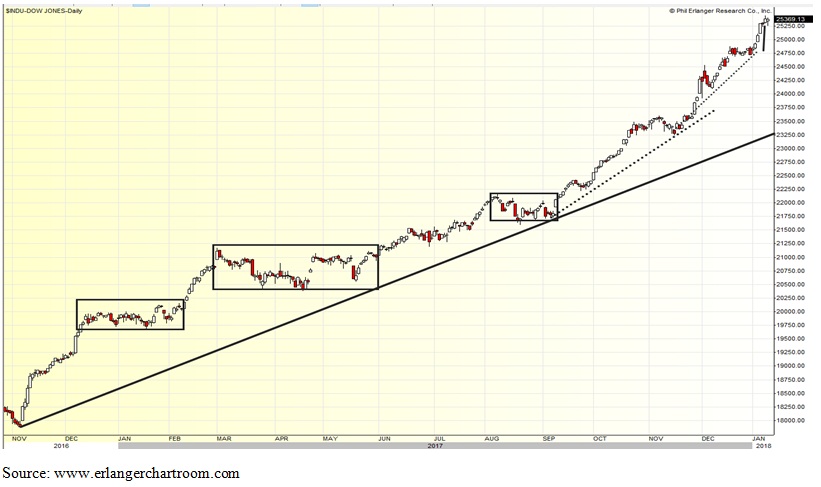 Investors were enthusiastic about the new president and his pro-business agenda and the market had a parabolic move in late 2016. Also, once Donald Trump was elected his economic team was in full force on the cable financial news channels explaining and promoting their economic plans. Investors understood that the plan had a good chance of happening because Republicans controlled the Presidency, the House and Senate.

Once investors realized that the plan would take longer to implement than anticipated, the market started to act normal, similar to the seasonality chart above.

As the year progressed, investors started to realize that earnings were improving and there is synchronized global growth, and market action improved.

In my August Market Outlook, I explained that moves in prices normally move in about five steps and the market will normally retrace about 33% to 50% after the five steps. Often times these steps are the consolidation periods. Last year there was about 6 steps. This market will probably break this pattern.

The black trendline is the long-term trendline. Notice the acceleration from the trendline, the dotted trendlines. This is normally a sign of speculation.

Parabolic, 90 degree moves, are not sustainable, like most things in nature. Parabolic moves are also a sign of speculation. The last parabolic move in late November did not go far and ended in some selling. Investors used the selling to buy. Tax reform was passed in late December, and we have another parabolic move. We can probably expect this move to end soon, but investors and traders will probably use the selling to buy.

Another trend that is occurring in the markets is the automated buying from 401Ks (buying target funds), financial planners (buying ETFs) and hedge funds, and some portfolio managers. I’ve noticed the markets tends to gap up in the morning, but almost every day around the last hour before the market close, there is lots of buying. This probably means automatic buying by the participants listed. Below is a 5 day, 5 minute chart of the Dow 30 that shows the trend: 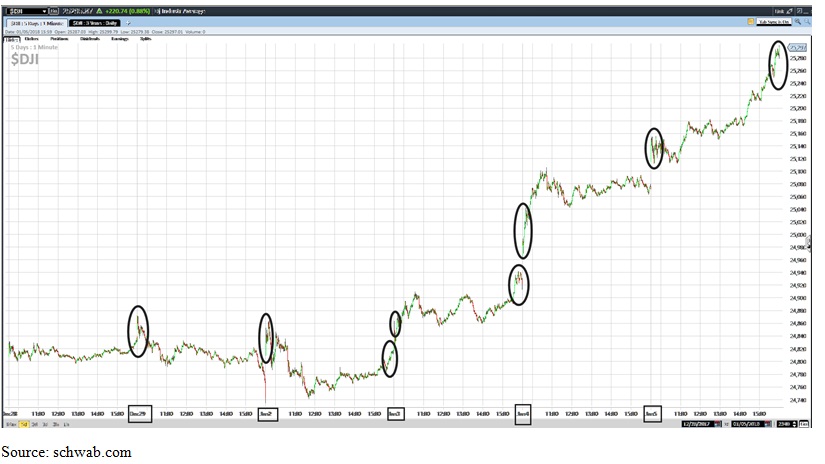 I circled the openings and close of each of the five days. The only day where the market sold off in the last hour was the last day of the year, December 29. The selling was probably due to profit taking for 2017.

One of the main reasons why this market has been strong is because once prices break to new highs, most of the resistance and supply are gone, and it will be easy for prices to continue to make new highs. I rarely hear market analysts on cable financial news talk about this. Below is a long-term chart that shows the breakouts and new highs over the last 18 years: 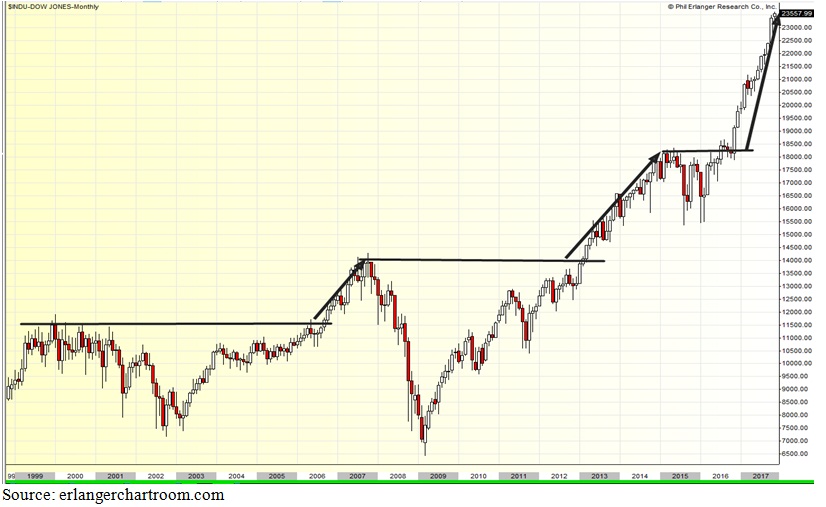 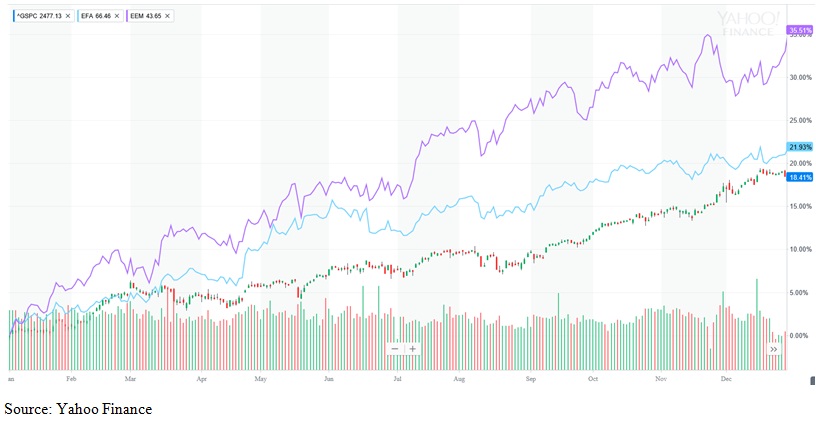 Notice that the EFA and EEM did follow the normal pattern of stocks, a move and then a pullback/selling, especially the EEM. Again, investors and traders in domestic ETFs aren’t waiting for pullbacks in the markets. Since September, they seem to be buying on a daily basis.

Financial Planners have been plowing money into foreign stocks, this trend will probably continue this year.

I recommend not chasing this market. BE DISCIPLINED, BE CAUTIOUS, BE PATIENT.Below are the strategies I’ve been using.

Here is my criteria for investing/trading in equities:

In my November issue I covered Occidental Petroleum (OXY ticker symbol), it does meet the above criteria. Below is a current chart: 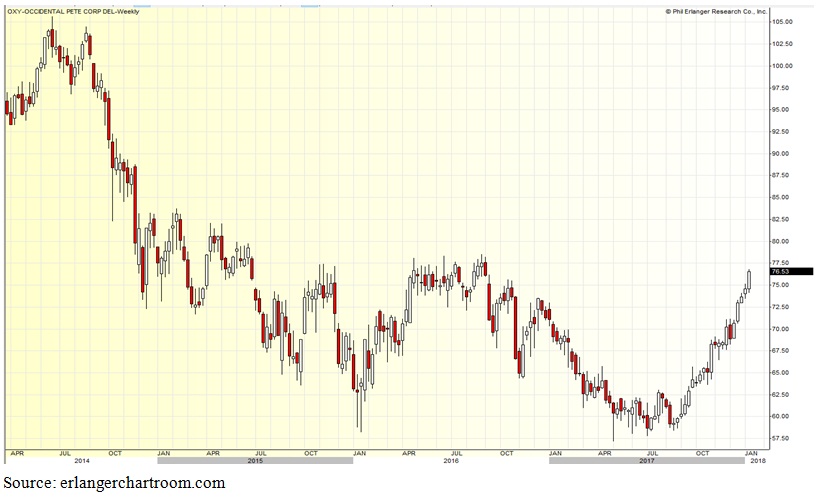 Because interest rates are rising, and expected to continue to rise, many dividend paying stocks are pulling back including utilities, REITS, bank loan/business development companies, and some consumer staple stocks.

We will probably be accumulating shares in some of these sectors. Prices could go lower when we have a recession and bear market where we can add to our positions at lower prices with better dividend yields.
Summary