Below is the latest predictions for the elections from Pivit: 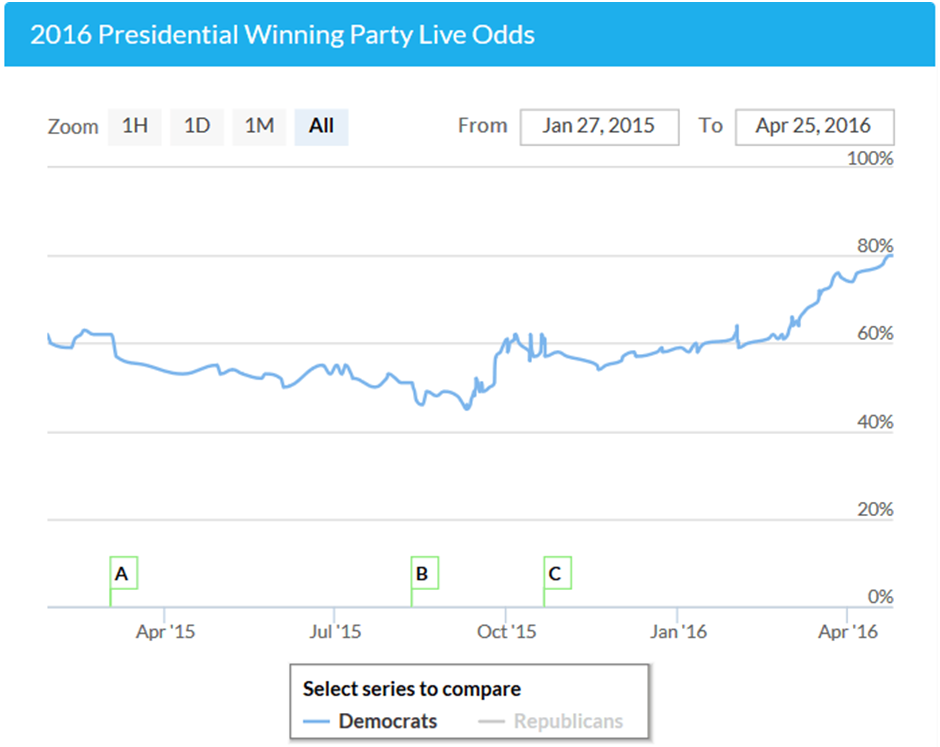 According to Pivit, the Democrats are improving the chances of winning the White House.

The dollar is rarely taken into consideration when U.S. consumers and individual investors make purchasing or investment decisions. One of the reasons for this is because many of the services and products we consume are denominated in dollars. Also, most of these products and services are generated and consumed in the U.S., so the dollar’s movement isn’t as important as it is in other countries. Most countries have to import products and services and those products, services many times are denominated in dollars, so the dollar is important to those countries.

Today, the dollar does matter for investors, especially for our multinational companies who compete overseas. If the dollar is strong, and when they bring back their foreign profits and convert them to dollars they will have losses in the conversions. Also, a strong dollar will make their goods and services more expensive, as you will need more of a foreign currency to buy a stronger dollar denominated products and services.

Below is a ten-year chart of the dollar index, a basket of currencies of our main trading partners: 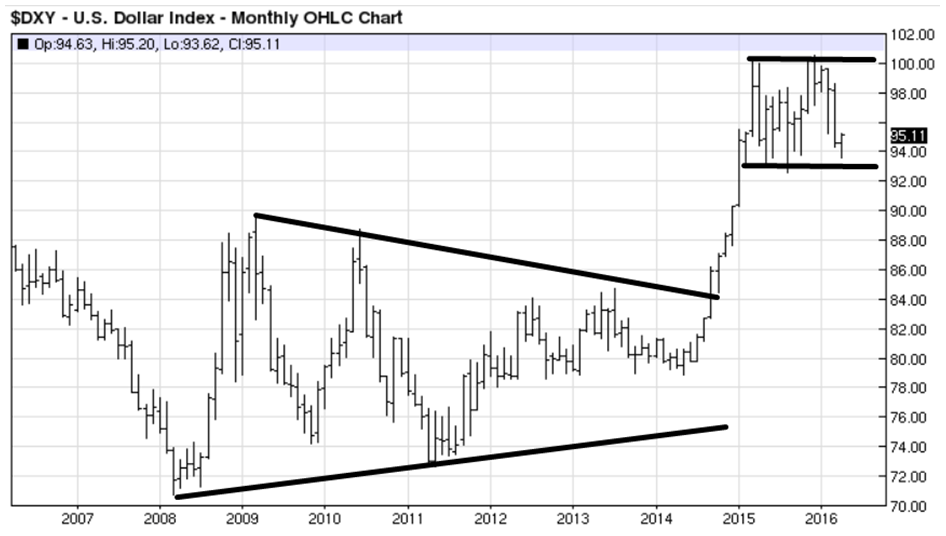 After the financial crisis, the dollar fell to about 70. As the economy recovered, the dollar strengthened.

The last few years we’ve seen the dollar accelerate upward. Below are some of the main causes of the dollar’s bullish trend:

It is normal for the dollar to trade in ranges for long periods of time. For about the last 1 ½ half years, the dollar has traded from around 93 to 100.

There is a chance that rates normalize higher, this could cause the dollar to break above 100. If we go into a recession, the dollar could fall below 93.

The stronger dollar is one of the reasons for weak corporate earnings. Some analysts are increasing their earnings estimates due to a stabilizing dollar. 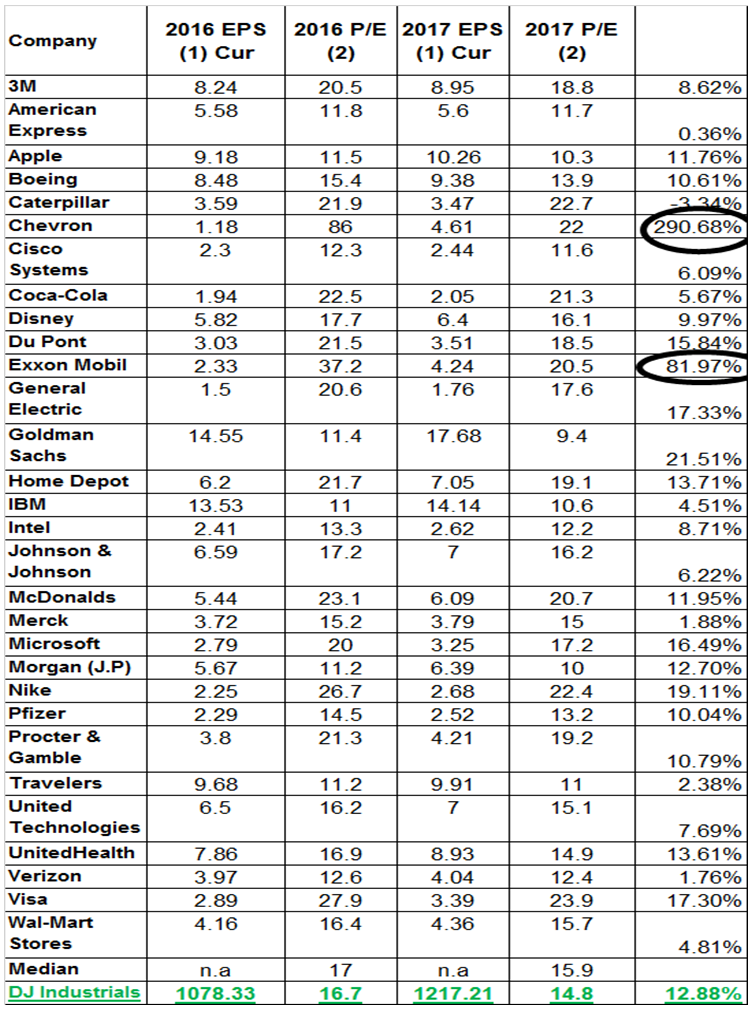 Analysts see a 12.88% increase in earnings for 2017. Before I change my mind from being cautious, we must take another look at the numbers including looking at similar periods of the market.

If we take out energy companies Exxon Mobil and Chevron, the growth rate is less than half  12.88%, still better growth than what is expected for 2016.

Part of the improvement in earnings is based on the stabilization of the dollar. This may not pan out. Currency losses could be hedged, but the stronger dollar makes U.S. goods and services less competitive, this will not change, and I doubt that earnings will be as rosy as analysts are forecasting.

Also, if we look at last year’s Dow 30 2016 forecasts, we can see that earnings forecasts were near the same levels as forecasts for 2017:﻿ 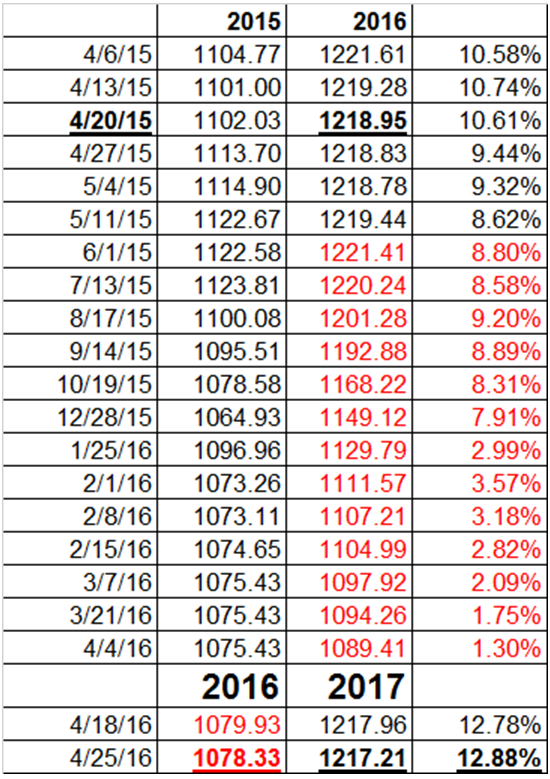 In 2008, 2009 we saw earnings forecasts too optimistic, and analysts were dramatically lowering their forecasts during this period: 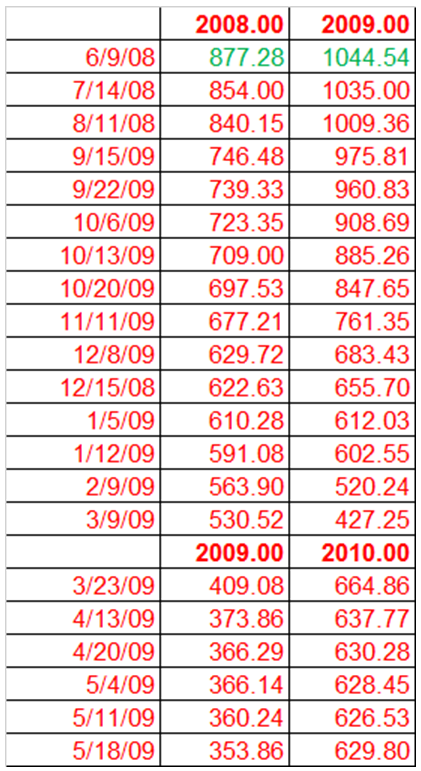 As the chart above shows, at the beginning of 2008 earnings were forecasted to be 877.28, and were lowered to 353.86 by May of 2009. At the beginning of 2009 earnings forecasts were 1044.54, too optimistic. This is quite normal where analysts are too optimistic and are not good at identifying inflection points in the economy, markets and earnings.

Below are the price targets for the major markets based on the current consensus earnings estimates: 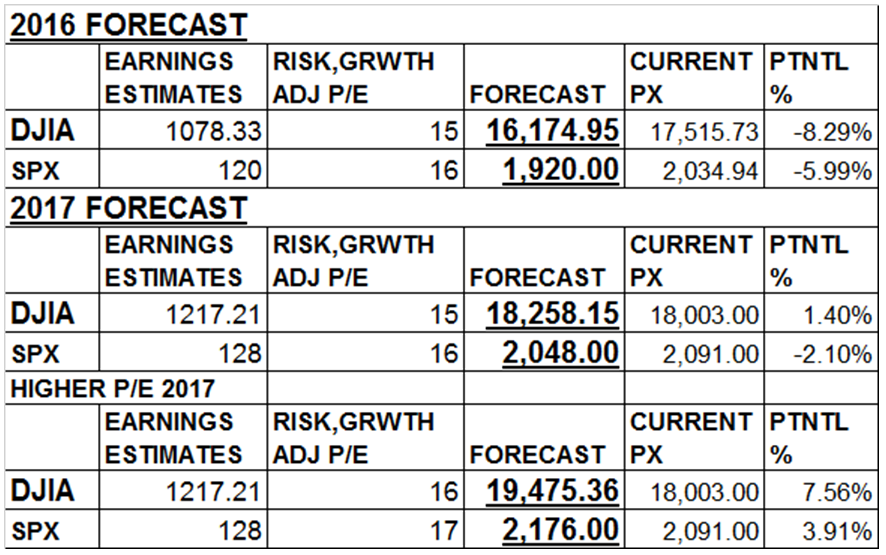 If these forecasts are correct (remember there is a trend of analysts lowering earnings estimates), then the markets are overvalued this year and fairly valued for 2017. I use a lower P/E because of the lower growth, higher risks, and the aging of this economic and market cycle.

The last 3 columns I do use a slightly higher P/E for 2017, and if investors do pay a higher multiple (I don’t believe in paying a higher multiple for the reasons listed above) then the markets do have some upside for 2017.

To summarize, it’s too early to believe these earnings and market targets because:

1. Even though the dollar is stabilizing, it will not change the fact the dollar is stronger against other currencies and makes U.S. goods and services less competitive.

2. Analysts are not good at anticipating turning points in the economy and markets, they are normally too optimistic.

3. I’ve learned to pay less for stocks in the late phase of an economic and market cycle.

I remain cautious, unless these earnings forecasts stop going down. The upside is limited compared to the downside.﻿