I’ve been recommending that investors need to be cautious for the following reasons.

I’ve been recommending that investors need to be cautious for the following reasons:

I have been asked several times, what is an investor to due during this time of overvaluation and rising risks. What do I do with the cash I’ve raised?

What normally happens toward the end of the cycle is the companies that led on the way up, lead on the way down. Let’s look at the last cycle.

Let’s review the above chart:

The main economic theme of the 2000s, and the companies that led the bull market were the commodity stocks that benefited from China’s economic boom. The Chinese economic boom started to slow down, and many commodity companies, stocks entered bear markets, especially energy stocks (there were other reasons for the bear market for energy stocks).

Below is an example of an ETF that is commodity related and has gone through the panic phase, and is now in the basing phase: 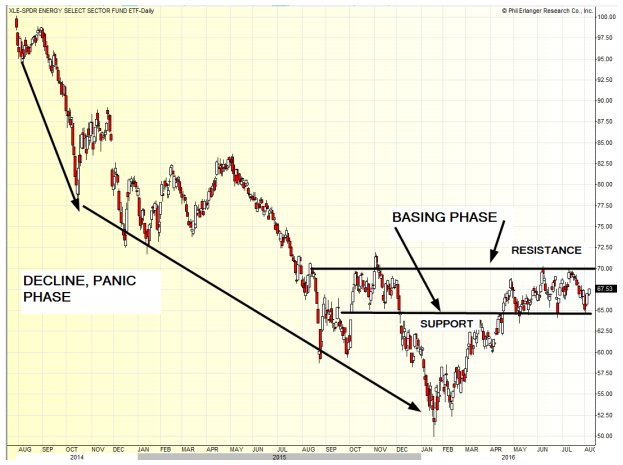 The chart is of the energy ETF, symbol XLE. Let’s review the chart:

An investor could also sell a put at around $60 on a pull back, and collect a premium. The stock would probably not be assigned, so you would keep the premium. If you would like an explanation of this strategy, send me an email. It’s a nice way to collect extra income on your investment capital.

As mentioned above, this is a risky trade as the low is around $50. It’s not unusual for prices during the basing phase to test or even make a new low. If you did buy at $65, you should be okay because normally after the basing phase we go into the growth phase, and two to three years out, prices are usually much higher. Under the right conditions, the XLE could move back to over $100 in the next economic and market cycle.

It’s not safe to buy and hold until the economy enters a recession, and there is visibility of an economic and earnings recovery. Once this occurs, more stocks and industries will have entered into bear markets and basing periods. Investors with cash will have many more opportunities to invest in undervalued, oversold stocks.

Below is a chart of the current market cycle were in: 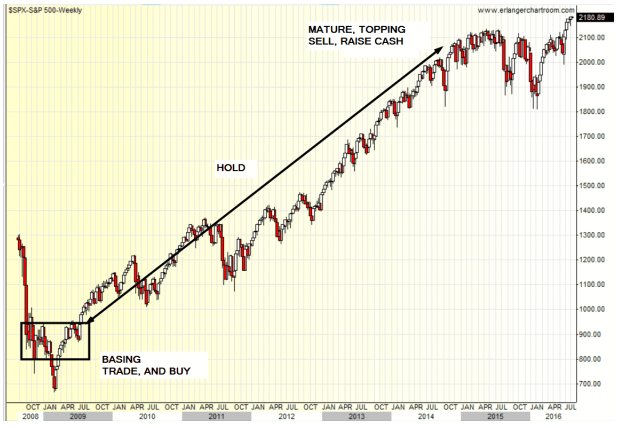 Investors should not be buying or even trading at the market top because of valuations and the downside risk is much more than the upside risk.

When prices enter the basing phase, and have entered into a bear market, investors can start trading the basing, sideways movement.

Once we have visibility of an economic and earnings recovery, investors can start to buy and hold for the next bull market.

During the basing and bear market period, there are many bargains for investors that have raised cash.