With Republicans in control of the Presidency, Congress and the Senate, the Trump administration will probably enact:

The markets are bullish regarding the prospect of fiscal stimulus, pro-business, and pro-growth policies.

Earlier this month I wrote,

“The markets are doing well for the following reasons:

The markets continue to follow the same course as described above.

I also wrote, “Once the current rally sees profit taking, we can expect continued volatility in the markets.” We will probably see this at the beginning of the new year.

Also, I have the cable financial news on during market hours, and many guests, investors suggest investors/traders should wait to take profits in 2017 because of the potential tax cuts in 2017.

Some commentators, investors and money managers believe that the Trump administration could be similar to the economic and investment prosperity of the Reagan years. Unfortunately there is more in common with the Bush Administration.

Below is a table that lists the background, and some of the key economic metrics and trends of Presidents Ronald Reagan, George W. Bush & President Elect Donald Trump: 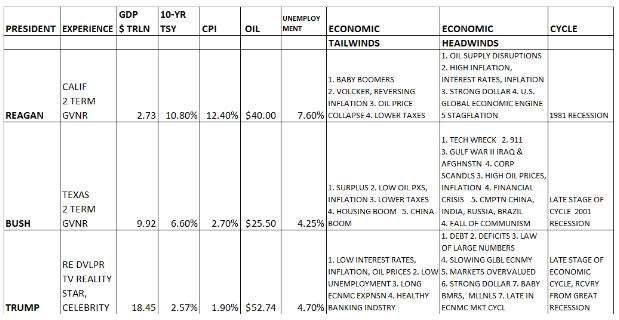 President Reagan (California) and Bush (Texas) were both two-term governors of important states. They both had government, political experience. Donald Trump is well known as a real estate developer and celebrity, reality TV star.

There is always a question whether a business person has the right skills to take on what is probably the most difficult job in the world. Several businessmen have tried to run for President unsuccessfully (Ross Perot, Mitt Romney), and a few have run state and local governments (Mitt Romney, Michael Bloomberg) with some success. Donald Trump will be the first President who ran his businesses all of his adult life.

Those of us who went to business school were taught that the job of every corporate executive is to maximize profits: Profit Maximization = Maximize Revenue – Reduce and Control Expenses.

One of the biggest expenses of most businesses is labor. Businesses have reduced headcount by mergers and acquisitions, technology, outsourcing and sending some jobs overseas where labor is plentiful and lower cost.

The new administration has a mandate to create millions of high paying jobs. Will this business oriented administration shift from profit maximization to job creation. They will have to if they want to stay in power.

In a future report I will analyze and write about job creation.

The economy was in bad shape when President Reagan took the reins in 1980. The economy was in recession, recovered and went back into recession in 1981 (grey shaded areas in chart reflects recession periods). The major economic events prior to President Reagan’s election was Middle East oil supply disruptions during the 1970s. This caused stagflation (a stagnant economy with inflation). As the table on page two shows, inflation and unemployment were high. Oil prices went from around $5 a barrel to about $40 in the 1970s.

The economy did recover by 1982, and the markets and economy started a new cycle thanks to:

- Oil prices falling and then collapsing in 1985.

- The U.S. was the economic engine of the global economy, and did not have significant competition from its trading partners.

- Not only was the U.S. the global economic engine, it was also relatively small, $2.7 trillion, making it easier to achieve higher rates of growth. The 1980s were the last time the economy saw double digit growth.

- One of the most important trends of the 1980s were the continued entrance of baby boomers and women into the labor force.

The chart below shows labor participation growing in the 1970s and 1980s and currently.

What was a tailwind for the 1970s and 1980s has now become a headwind when labor participation falls as baby boomers retire, and the economy has a difficult time creating high paying jobs. With baby boomers leaving the work force, will the participation rate fall to the levels of the 1950s, and 1960s?

- Baby boomers started families helping fuel growth and consumer businesses. The chart below shows how consumer companies, stocks did the best in the 1980s. 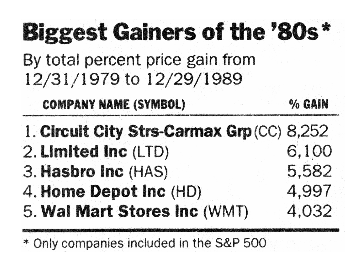 President Bush took over as one of the longest economic expansions, and best stock markets was close to ending. The economy was about three times bigger, $10 trillion, than when Reagan took over. Inflation, oil prices and interest rates were all relatively low. Employment was considered at full employment (unemployment below 5%).

The strength of the economy and the markets were due to the technology revolution that started in the 1990s, but ended in the early 2000s with the bursting of the technology bubble.

The economy went into recession in 2001. Overall, the 2000s were a difficult decade for the country and economy. Some of the difficulties included:

There were two big investment themes in the 2000s:

Unfortunately both trends have reversed and have had negative economic global consequences.

As Trump takes over, the economy is basically in good shape. Interest rates, oil, and inflation are basically low (they are all starting to rise and could present problems for the economy and markets). The economy has been expanding since 2009, and is one of the longest expansions on record.

Another positive for the economy, a healthier banking, and financial system that is safer.

There are certainly problems facing the economy:

- A stronger dollar, will cause goods and services to be more expensive overseas, and cause currency losses

- We are in the late phase of this economic cycle. Can Trump make this the longest economic cycle in economic history? This list suggests it will be very difficult.

- Law of large numbers, it’s hard to move the needle on an $18 trillion economy

- This economic and market cycle is aging, and future comparisons will be harder to beat.

- If we have a financial crisis or enter a recession, interest rates are still too low to lower to stimulate an economy in trouble. Lowering interest rates is the most important monetary tool our economy has.

- Our workforce does not have the right training and education for the new jobs of today.

- In the 1980s, baby boomers emerged as a dominant economic and investment trend. In the 2000s, housing, financials and China were the major economic and market trends. There are no major economic trends that could create added growth to our economy today.

China, housing, and baby boomer trends are all reversing.

- See my article, the New Normal Update. Click here to read the article. The article explains why the U.S. has and will probably continue to have a slow growth economy.

Why Trump and W Bush Are Similar Versus Reagan

There are a few similarities that Trump and Reagan have:

Both were celebrities from the entertainment industry,