Every year I do an economic and market forecast for our subscribers. This exercise is like looking at the variables one needs to look at for a business: what is the outlook for growth, what is the inflation and interest rate picture, how are our trading partners doing, what are the potential risks?
Economists and forecasts are notorious for not forecasting important turning points in the economy and financial markets. These forecasts are constantly updated, and the updates are probably more important as I can track the trend in the changes, are they improving, deteriorating, or staying the same. This is why I also do a monthly forecast. The outlook can help us be more aggressive, or more cautious.
The forecasts, estimates below are a consolidation from 2016 outlooks from Barron’s, WSJ, Fortune, BusinessWeek, CNBC, Wells Fargo, Charles Schwab, Merrill Lynch and our analysis of economic, business, and investment trends.

Summary
GDP
The U.S. economy has averaged about 2.5% growth for this economic cycle.
The chart below includes an average of nearly 50 economists for GDP growth for 2016. 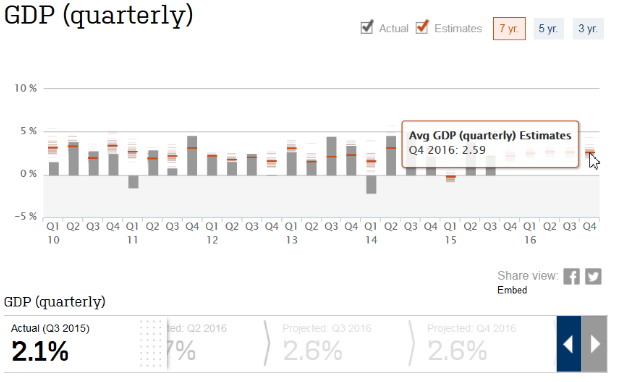 Source: WSJ
Economists and forecasts are notorious for not forecasting important turning points in the economy and financial markets. These forecasts are constantly updated, and the updates are probably more important as I can track the trend in the changes, are they improving, deteriorating, or staying the same. The red lines are the estimates. The dark columns are the actual growth rates. This is why I also do a monthly forecast.
The consensus forecast for 2016 is about 2.5% GDP growth.
The consumer is about 70% of the economy, and the consumer is in good shape. Consumer confidence, spending, housing and autos are all positive.
Most economic cycles last about 5 years. If this cycle ends in 2016, this economic cycle would be an unusual 7 years.
Even though growth has been sub-par, the good thing about the sub-par growth is that it is sustainable for a longer period of time. It’s similar to a race, if you run too fast (high growth), that pace will be hard to sustain. A slower paces is more sustainable.
Most of the headwinds the economy faces are external that I will review in the Global Concerns section below.
Unemployment
Here is the consensus forecasts’ for unemployment: 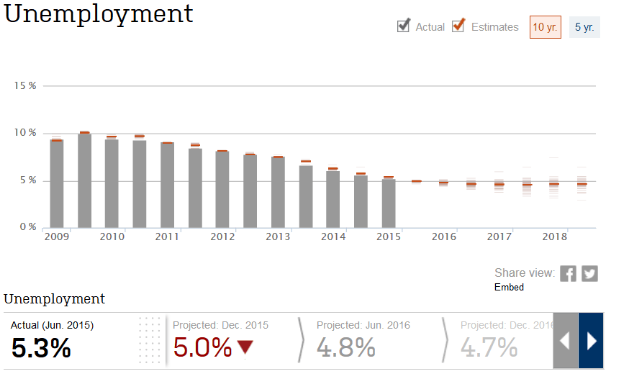 Source: WSJ
The latest employment trends of job growth are the best in 15 years, and is below before the Great Recession.
Some economists have been pointing out that the reason why unemployment is going down is because many are dropping out of the labor force. Because the job market has been tough, both young and older people are going back to school for more training and education, and many older workers/job seekers are deciding to retire early.
They are also pointing out that many of the new jobs are low-paying, part-time or temporary jobs.
There is also a problem of stagnant wage growth. 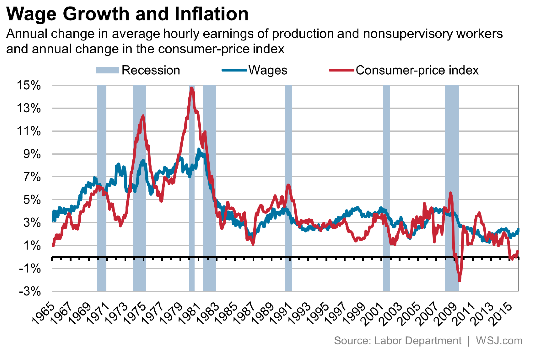 Wage growth for the past 30 years has been low. There was a slight increase in wage gains in 2015, but many economists believe that we need to see increased wage growth to see better consumer spending and economic growth.
Consumers are happy to see gas prices at the pump down significantly. There are many reasons for the fall in oil prices.
Currently oil prices are in the low $30s. So far the gas savings is not showing up in retail sales. Some of the money is being used to buy new cars and added to savings.
Here is the current outlook for oil: 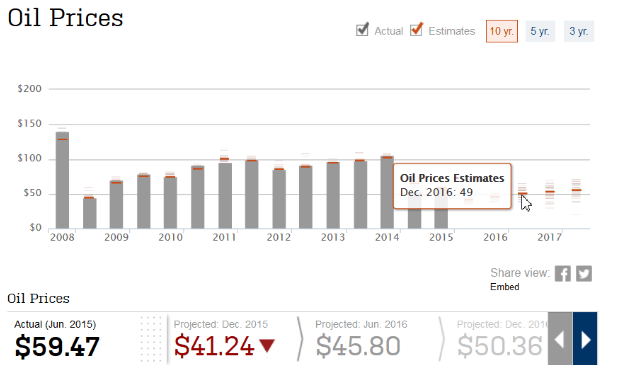 Oil is expected to rise to the $50 level by the end of the year due to supply and demand may be closer to equilibrium.
Most economists believe the current low energy prices should be a net benefit to the U.S. and global economy.
Because oil is such an important component of the U.S. and global economy, I will provide a comprehensive oil outlook for the U.S. and global economy within the first quarter of 2016.
Plunging oil and commodity prices, have hamstrung many emerging economies and some of our major trading partners are hurting economically, as rely on income from exporting raw materials including oil.
Low oil prices have hurt our energy industry, and there have been over a dozen public energy company bankruptcy in 2015.
Inflation
Below is a chart that shows the trend and 2016 forecast for inflation. 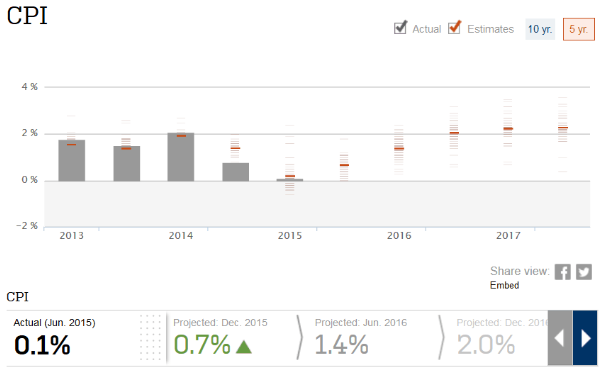 Source: WSJ
Economists see inflation rising slightly due to a bottoming of oil prices and some wage gains.
The strong dollar could continue to help keep inflation lower as imported goods would be cheaper keeping pricing competition pressure on U.S. companies. 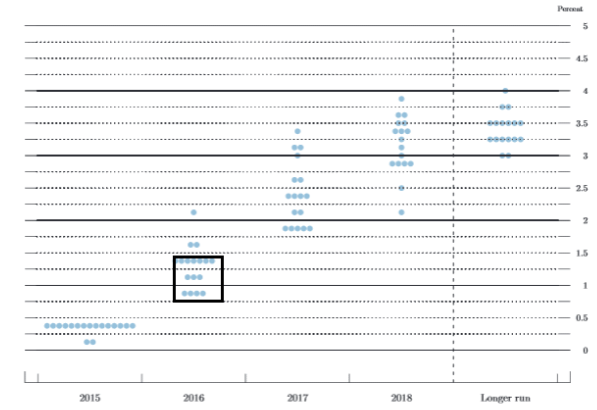 Global Concerns
I’ve studied every bear market and recession going back to 1917. One of the major causes of many recessions is too much debt, and that debt, capital spending was unwisely spent. Most recessions uncover the sins of the cycle. China’s economy has too much debt and much of that debt was spent on projects and luxury apartments and condos that were not needed.
I’ve written about the China economic and commodity boom reversal. Click here to read my November Economic Outlook for 2013. The China and commodity reversal continues to play itself out and has not run its full course.
The reversing of commodity prices from its highs have hamstrung many emerging economies that rely on income from exporting raw materials.
Most of our major trading partners are forecasted to have anemic growth in 2016. There are many countries that are in recession or at risk of a recession: Russia, Venezuela, Canada, Greece, Finland, China, Japan, South Africa, Italy, and France.
Other global concerns include: the refugee crisis in Europe and MENA (Middle East, North Africa), the proxy war in Syria, ISIS and other Islamic terrorist groups and their potential terrorist attacks across the globe including the U.S., global climate change (droughts, floods, hurricanes, tornados, extreme weather…)
Some economists and analysts are concerned about currency wars among many of our trading partners. This has caused the dollar to be stronger and is a headwind for our global companies. U.S. companies are less competitive overseas when the dollar is strong. The strong dollar hurt GDP and earnings in 2015.
The strong dollar creates a global problem, especially if the dollar continues to strengthen. Companies and countries that have borrowed heavily in dollars but whose income is denominated in local currencies have become pinched as the dollar has strengthened. Further, their borrowing costs will likely increase if the U.S. central bank tightens monetary policy, which could further boost the dollar.
My question: can the U.S. remain an island of prosperity, with a slowing global economy and high geopolitical risks.
Black, Grey Swan Events
Some of the grey, low probability events that exist include: continued cyberattacks; ISIS; terrorist attacks; negotiations with Iran and repercussions; low oil prices could cause Iran, Russian and Venezuela to take desperate actions to reverse their fortunes.
There are always the “black swan” events that are improbable, and unknown that could have a big impact.
One of the main worries that I’ve had for the last few years is I believe the Fed has run out of effective bullets to deal with a major financial crisis. Their most potent tool has been lowering interest rates. With rates close to zero, the Fed does not have this tool. During the financial crisis of 2008, the Fed has loaded up its balance sheet to over $4 trillion. Most economists believe that adding to the Fed’s balance sheet to buy government securities would be like pushing on a string.
If we do have a financial crisis, or recession, it could last longer than past recessions because the Federal Reserve does not have any effective monetary bullets left to use, and I doubt that our lawmakers near elections will provide any fiscal stimulus.