How to Buy Low and Sell High

When I was in business graduate school at UCLA, I had a Professor, Dr. Donald Rugg, who taught us about the many cycles that investors should be familiar with: political, economic, market, product, interest rate…. I always remembered this advice and over the years I’ve done my own research on the economic and market cycles of the United States.

The Economic and Market Cycle

The research that I did, helped me understand how to invest in these cycles.

Here is what the economic and market cycles look like:

Birth/recovery phase, also known as the basing phase. This is where valuations and prices are the lowest, there is less risk, and this is the time to be aggressive and to consider being fully invested.

Investors need to start deploying investment capital at the birth phase of a cycle (buying low) and start taking profits and raising cash during the mature to decline phase (sell high).

Below is some of the research I did that can help investors “buy low and sell high”.

Below is basic data on how long most economic expansions and bull markets last, and the average return of bull markets: 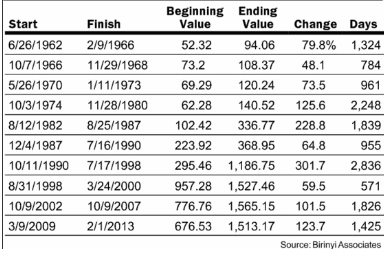 Investors should consider taking profits after about four to five years of a bull market. The current bull market is about seven years old. I will write a special report that analyzes why future bull markets may last longer. Briefly, as the economy and markets get bigger, both grow more slowly, meaning they can sustain their slower growth for a longer period of time.

The average bull market is up about 120%.

It’s important for investors to invest at the start of a bull market, because the average bull market is up about 120%. This means you should be able to double your money about every five to seven years.

This also means that investors need to identify recessions and bear markets, and raise cash to take advantage of the next bull market.

Below is basic data on how long most recessions and bear markets last:

Average Bear Market is down around 30% 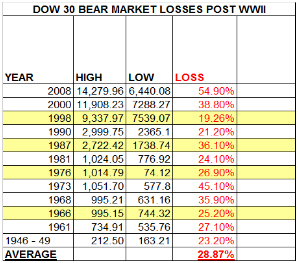 Time from Peak to Trough 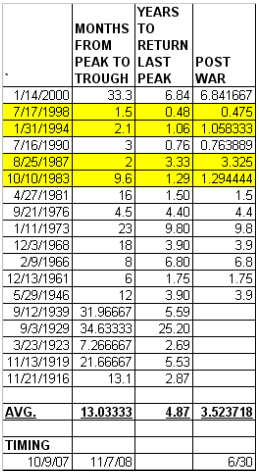 On average, it takes about 1 year from a peak to find a bottom. It takes, on average, about 5 years to go back to the previous peak.

Causes of Bear Markets and Recessions 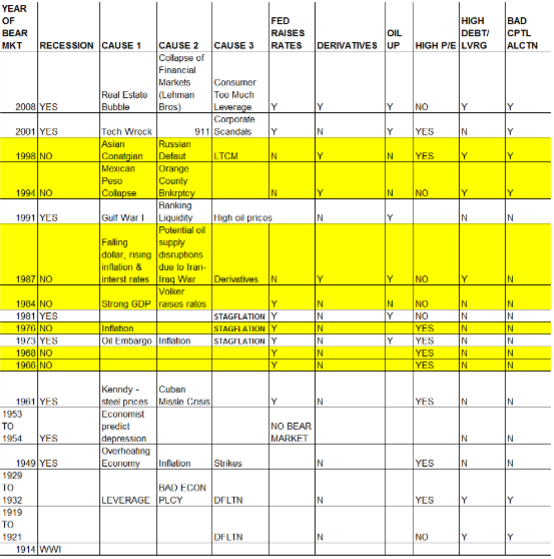 The causes of most recessions and bear markets include: too much debt; bad allocation of capital; high oil prices due to war/supply disruptions; the Federal Reserve raises rates too much trying to ease inflationary pressures; derivatives.

Undervalued and Oversold to Overvalued to Overbought

What normally happens at the start of a bull market, stocks and markets are oversold and undervalued – the best time to buy. By the end of the cycle stocks and the market tend to get overvalued and overbought, a time to take profits. We are in a profit taking period now.

Below is a chart that proves these points: 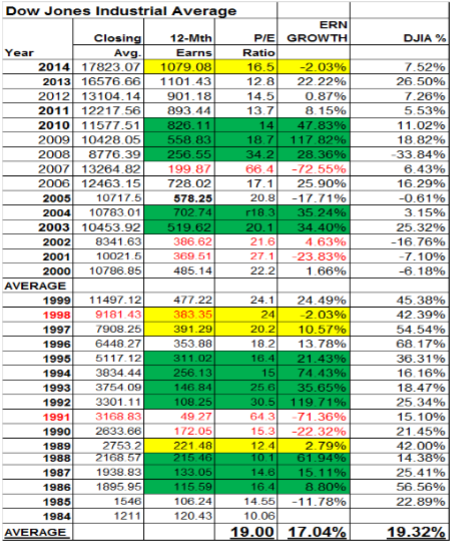 Again, earnings are strong at the beginning of an economic expansion/bull market. As the bull market and economy ages, growth momentum slows.

Buy When Prices Are Basing 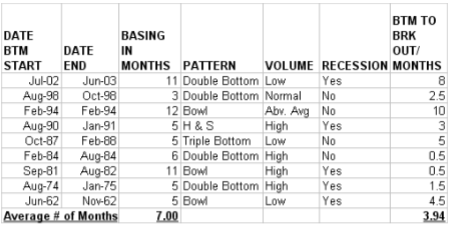 I’ve looked at each bottom of a market (also known as a basing phase) since 1962, and the key to buying low is buying during this basing, bottoming phase of a bear market. Basings do create the opposite patterns of major topping reversal patterns: head and shoulder bottoms, double bottoms, triple bottoms, and bowl patterns.

Basing patterns are like diving boards, the longer the base/diving board the bigger the next bounce/move.

Below are links to show from past experience how to buy low. Waiting for a good base.

Also, watch for earnings visibility improvements; monetary or fiscal stimulus from the U.S. and other central banks and major economies.

How to Sell High

Analysts and economists are notorious for not catching inflection points in the economy and markets. In Dr. Jeremy Siegel’s seminal book Stocks for the Long Run, he writes “Wall Street employs so many economists desperately trying to predict the next recession or upturn since doing so dramatically increases returns. But the track record of predicting the exact business-cycle turning points is extremely poor.” Admittedly, as Dr. Siegel writes, selling near a top is difficult.

I’ve developed a model to help with this identifying tops in a market, economy.

I believe the mistake economists and analysts make is not using more indicators from three different disciplines: 1. Economics 2. Fundamental Analysis 3. Technical Analysis. I will describe my model to identify major market tops in a future Special Report.

In this report I explained my strategy to improve returns and lower an investors’ risk. I’ve found the best way to do this is to buy low when valuations and prices are low, and sell when valuations and prices are high. The best way to do this is: Buy during the basing period (birth phase) when prices and valuations are low. Because prices and valuations are low this is the time to be aggressive and considering being full invested by the time the basing period is over, and the bull market starts. Most basing periods last about seven months, so take your time positioning yourself for the next bull market.

When you buy during the basing period hold on for about four to five years, as most bull markets move about 100%.

Sell when you’ve about doubled your money, and it should take about four to five years. At market tops (the mature to decline phase), prices and valuations are much higher versus the basing period, so this is when there is the most risk, especially during the decline phase. You do want to take profits and raise cash during this period to reduce your risk, and to have money for the next bull market and have the prospect of doubling your money again.