Major trends in the economy such as GDP, interest rates, CPI, retail sales, don’t change that much, especially month to month, but investment trends change much more often.

Going forward, I will not write a monthly economic outlook. Major trends in the economy such as GDP, interest rates, CPI, retail sales, don’t change that much, especially month to month, but investment trends change much more often. I will write my economic outlook on as needed basis, but I will provide at least one economic outlook per quarter.

Instead of a monthly economic report, I will probably write more about the markets and investing including investment educational articles.

Since we are mid-year, I will provide forecasts for the remainder of the year. The forecasts are from the Wall Street Journal and are a consensus of more than 60 economists from across the globe and these economists are from academia, diverse industries, Wall Street, and banking.

Forecasts caveat: This economic cycle is much longer than most and is considered mature, economists and analysts have a bad track record of forecasting turning points, especially this late in the cycle; review these forecasts with a grain of salt.

Below if the forecast for GDP 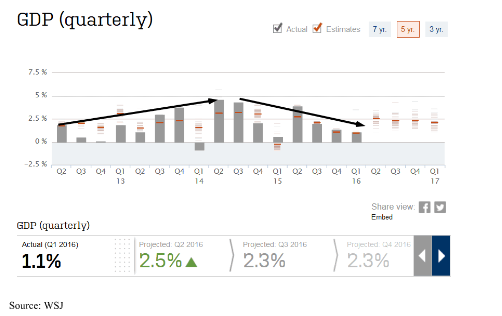 This chart and the charts below show that this economy started to slow down and change after 2014.

Again, the chart shows the economy slowly increasing since the financial crisis and peaking in 2014. Economists are expecting the economy to pick up later this year due to a stabilizing dollar and oil prices.

Brexit continues to have financial media coverage. Here is what I said about Brexit last month:

There is much disagreement on the impact of Brexit among economists and analysts.

In the short-run, Brexit could be very disruptive to the markets. On Monday the polls suggested that the Brits may vote to remain in the EU, and the markets rallied strongly. If the Brits vote to exit, then global and domestic equities could sell off, gold and bonds could rally.

It would take about two years for Britain to negotiate leaving the EU, so the impact would be longer-term.

I stand by this outlook, that there are disagreements on the impact, and that the impact short-term could be significant, longer term it is harder to determine.

The unemployment report in June dramatically improved from 11,000 in May to 287,000. Our economy still struggles to create high paying jobs. Most of the high paying jobs are in technology. Here is the employment trend and forecast:

We can see the same trend for employment, improving job creation after the financial crisis, and peaking in 2014.

Below are the forecasts for oil: 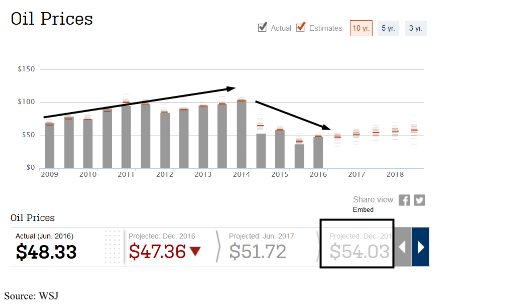 Again, oil prices peaked in 2014 and had a dramatic fall. Prices probably bottomed earlier this year, below $30.

Oil prices are expected to move above $50 next year due to closer supply, demand equilibrium.

Below is the trend for inflation: 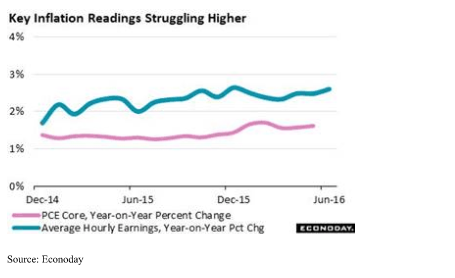 The Fed’s policies and efforts have been to avoid deflation and reflate our economy. Inflation looks like it’s starting to pick up.  The Fed is also very interested in seeing some wage inflation, and we are starting to see some pick in wages, especially at the low end due to some states initiating higher minimum wage laws, and companies like McDonalds and WalMart raising wages for their low wage employees.

Interest Rates and the Fed

Late last year, the Fed had forecasted that they would hike rates about four times in 2016, after the first rate hike in this economic cycle. Most of us did not believe the Fed would raise rates four times, maybe once or twice.

Below is a chart from Charles Schwab that illustrates the forces that are keeping the Fed from moving on rates: 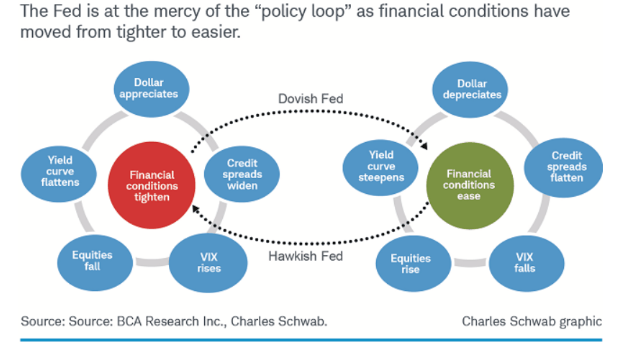 Most economists, analysts now believe the Fed will not raise rates in 2016. 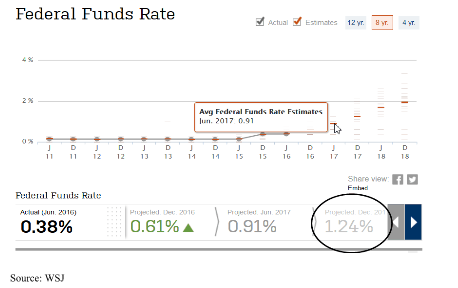 According to this forecast, the federal funds rate could move to 1.24% by the end of June 2017.
Currently the fed funds rate is .5%.

Why is the Fed been afraid to raise rates from their historic lows? Because their afraid to harm this fragile recovery. They feel, our economy needs low rates to help stimulate the economy. Interest rates are basically the cost of money. When the cost of money is basically zero, and you have anemic borrowing, this tells you the economy is fragile. This is true in most economies in the world.

Most of us did not anticipate that interest rates would go lower, and into negative territory in some of the developed economies in the world: 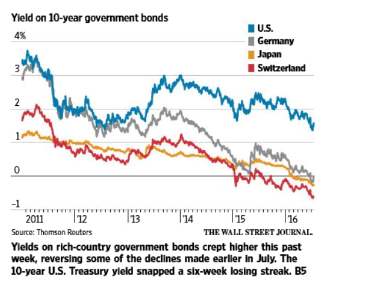 The U.S. has the highest rates among the developed nations, so this is attracting global capital, keeping our dollar stronger, pushing our rates lower and stock prices higher. 33% of all global government bonds today have negative yields.

What governments are basically saying when they have negative interest rates is, spend, invest or loan your money out. Don’t give us your money or we will charge you. When investors pay to invest their money, there is something wrong with the global economy.

Recently the Bank of England stated that would leave rates unchanged and are expected to launch new stimulus. Surprisingly, our stock markets rallied on the news. I can’t recall where England made such an announcement, and our markets rallied.

Below is a chart showing how negative interest rates are attracting capital to our government bonds:

Investors must ask themselves, why interest rates are so low and going lower? It’s because most global economies are anemic, and they have deflation concerns.

I’ve highlighted the chart below several times, but it’s a very important chart: 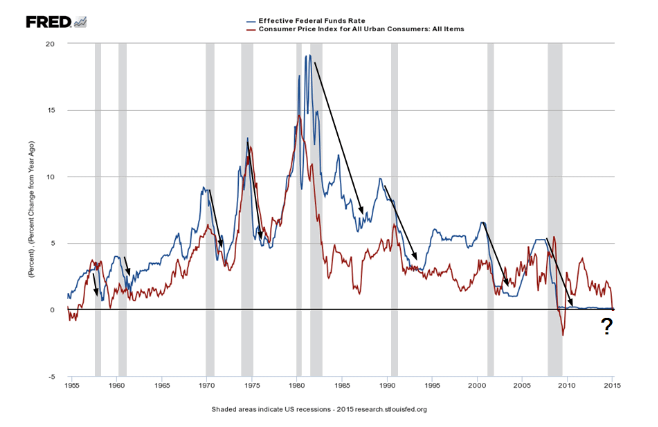 As, I’ve written before, during recessions the Fed normally lowers rates to stimulate the economy. Rates are close to zero, so if we have a financial crisis or recession, the Fed will not be able to come to the rescue. This could make a recession worse and last longer.

As I’ve been writing about for much of this year, our economy is fine, it’s the rest of the world that is worrisome. Also, the Fed has run out of effective monetary bullets to help our economy, especially if we have a financial crisis or recession.

Below is an international betting site with odds for the U.S. Presidential election:

Clinton is the betting favorite according to Betfair:

About $23 million has been wagered on this international site.