Below is a chart that shows the trend for economic growth 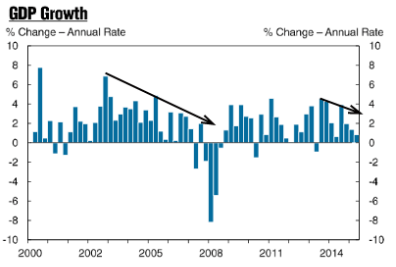 It’s normal for an economy to lose some steam as the economic cycle ages. We see this in the previous and current cycle.

Some economist believe that after a slow start, the economy should pick up due to a stabilizing dollar and energy industry and energy prices. 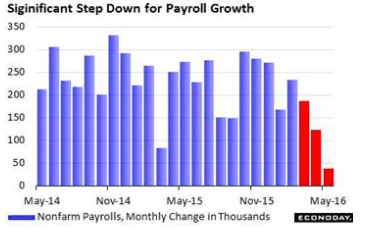 May employment numbers were a shock to many economists and investors. Only 38,000 jobs were created.

So far, the bad employment and economic growth numbers have not impacted consumer spending.

The consumer has benefited from growth in real disposable income, low interest rates and energy prices, and they have increased their discretionary spending, lowered their debt, and increased their savings.

Below is a chart that shows the trend of growth in hourly earnings: 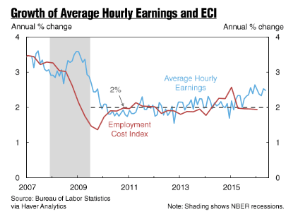 Wage growth has been stagnant for several decades, we are finally seeing some increases. Part of the increase is certain states are increasing the minimum wage and large employers like Walmart and McDonalds are providing wage increases to their employees.

Below is the trend for consumer spending and business capital spending:

Donald Trump’s betting to win has dropped, and are significantly lower than Hillary Clinton’s.

Click here to go to the betfair website.Donald Trump’s betting to win has dropped, and are significantly lower than Hillary Clinton’s. 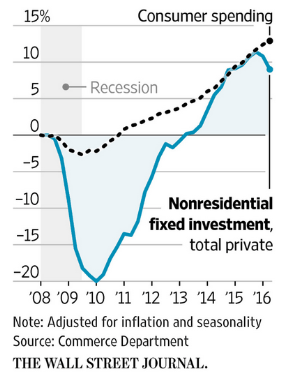 The chart shows how consumer and capital spending had recovered, especially consumer spending.

Notice that capital spending dropped about 20% during the start of the Great Recession. Businesses overreacted. Hopefully businesses don’t overreact if the lower trends in economic and employment growth continue.

Last year the “dot plots” (interest rates projections from Federal Reserve Board members) suggested that there would be about four interest rate hikes by the Fed in 2016.

Federal Reserve Chairperson Janet Yellen recently stated that a raise would not be imminent do to the slowing U.S. economy, the recent surprising bad jobs report, and weakness and uncertainty in the global economy.

We are seeing interest rates decline among most developed nations. 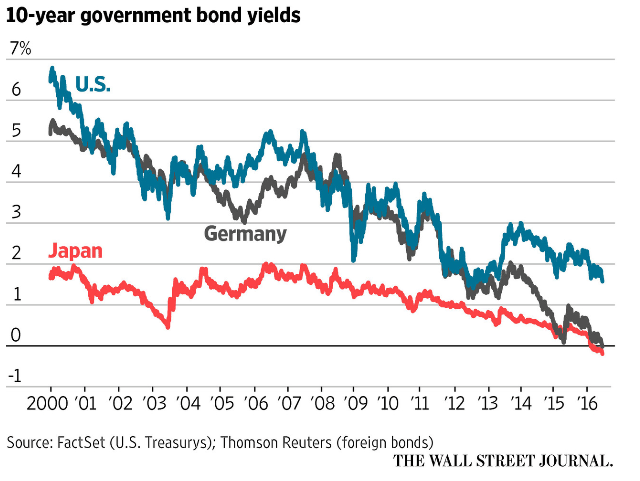 Amazingly, we are seeing negative interest rates in Germany and Japan, a sign of weakness and deflation in these major economies.

This is causing foreign money flow into the U.S. dollar and U.S. government bonds.

As I’ve been writing since last year, the U.S. and consumer are fine; It’s the rest of the world that many of us are concerned about.

Below is a chart that I’ve posted several times, and is a major concern of mine: 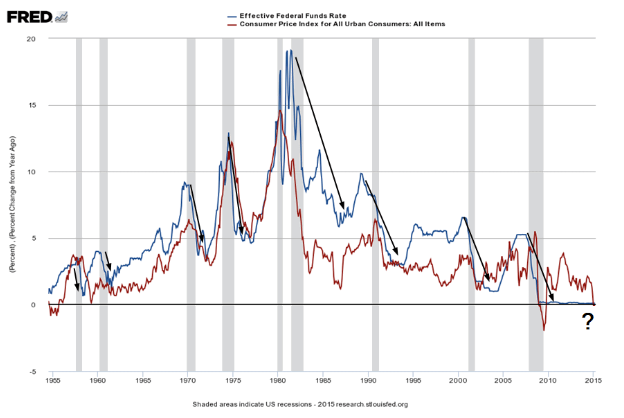 I’m seeing analysts point out my concern in the financial media – the Fed will not be able to lower rates the way they have in past recessions to stimulate the economy.

Lowering interest rates to stimulate the economy is one of the most effective monetary tools the Fed has. If we go into recession, the recession could last longer and be more severe than most recessions.

Brexit (Great Britain exits the European Union, EU) is on the minds of most investors, economists, analysts, Europeans, and Brits.

The biggest reasons for the Brits considering leaving are: political (sovereignty, they don’t want to answer to the EU), social (they want to control their immigration, especially refugees from the Middle East), financial. Great Britain is not part of the Eurozone, only the European Union. They have their own currency and central bank. They would like to pursue their own trade agreements.

There is much disagreement on the impact of Brexit among economists and analysts.
In the short-run, Brexit could be very disruptive to the markets. On Monday the polls suggested that the Brits may vote to remain in the EU, and the markets rallied strongly. If the Brits vote to exit, then global and domestic equities could sell off, gold and bonds could rally.

It would take about two years for Britain to negotiate leaving the EU, so the impact would be longer-term.

Probably by the time you read this, the vote will have taken place. Below is latest wagers for Brexit:

The betting is favoring staying in the EU.

Here is the current presidential odds from the website electionbettingodds.com:

Ms. Clinton’s odds have increased, and Mr. Trumps have decreased since May.

Below is an international betting site with odds for the U.S. Presidential election:

Clinton is the betting favorite according to Betfair: 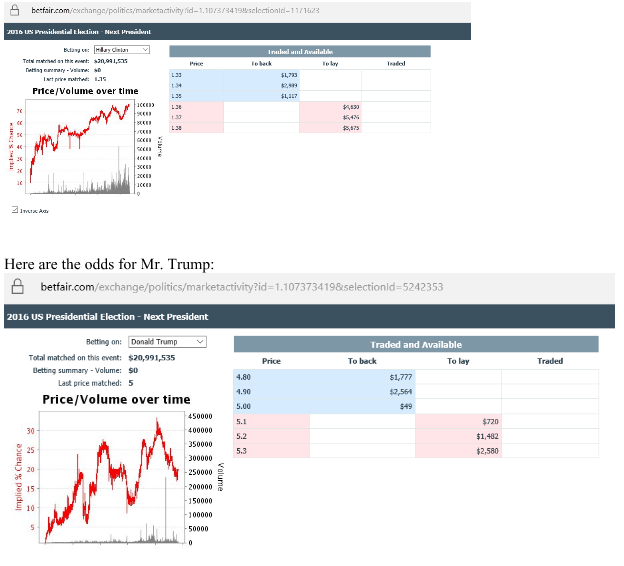 Donald Trump’s betting to win has dropped, and are significantly lower than Hillary Clinton’s.