At the end of last year and beginning of this year the economy looked anemic and analysts and investors were worried about a recession in the U.S.
The concerns about a recession have abated, and the markets have recovered from the correction of the first few months of this year. The reasons for improvements include:
If we do have a recession, it will probably be caused by a global slowdown. Post WWII, this would be the first time that the global economy, especially China, would cause a U.S. recession. It’s usually the other way around. There is an adage, “when the U.S. gets a cold, the world gets pneumonia”. The adage may become obsolete.
Global Economy & China

Below is a trend table for the global economy:

Source: The Conference Board
The U.S. economy continues to be one of the strongest economies among the developed, mature economies. Japan is contracting, but Europe did improve. Europe may have a difficult time this year integrating the new immigrants from Middle East wars and crisis.
There is negative growth rates in the emerging markets especially Brazil, and Russia.
Notice that China’s growth rate, according to the Conference Board, was 3.7%. China reported last year that their economy grew 6.9%. The 3.7% number is probably correct, most analysts don’t believe the 6.9% number.
China has been dealing with many economic problems:
Below is a chart showing the leading economic indicators around the world: 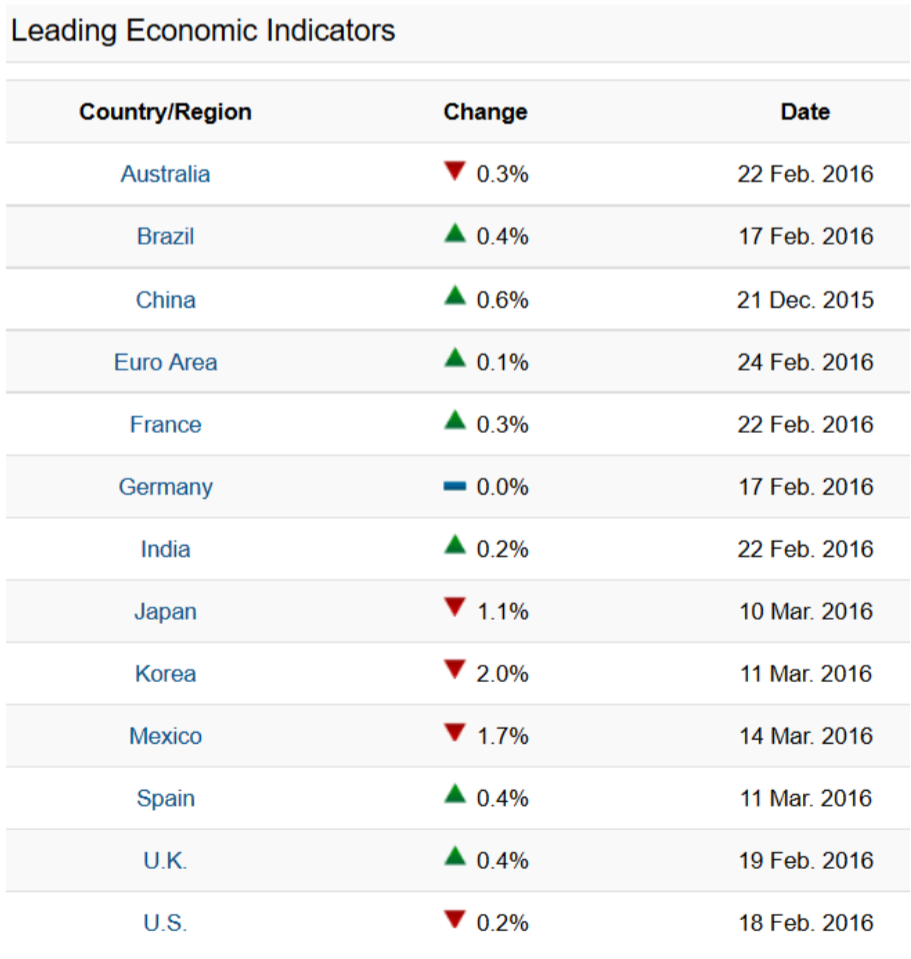 Source: The Conference Board
Most countries are seeing little progress so far in 2016, and many countries’ leading economic indicators are negative. Will these leading indicators be right?
A weaker Chinese currency and stronger dollar is hurting emerging market economies because of lower exports, and large dollar denominated debts.
One of the problems that many countries are facing because of anemic growth is low inflation.
Here is a chart for the developed economies inflation trends: 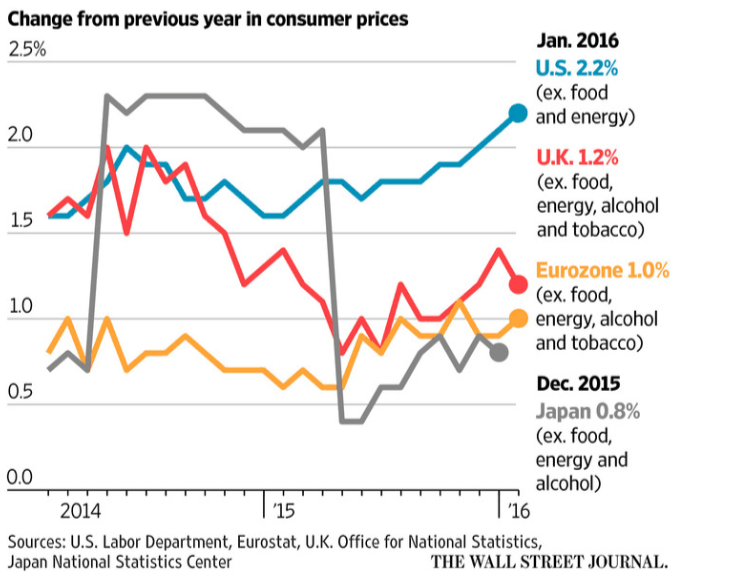 The central banks of Europe, Japan, Switzerland, Denmark, and Sweden have all adopted negative interest rates to try and help their economies, and ameliorate the fear of deflation.
The basic idea of negative interest rates, is to incent banks to loan money, or else get charged for leaving money at the central bank. Negative rates could lead to higher economic growth, and higher asset prices, and some inflation. So far, the results have been mixed.
The ECB recently announced a stronger than expected stimulus package. The package includes: lower interest rates, an increase from .5% to .4%; increased bond purchases including corporates; a multi-tier system for its deposit rates with some banks being charged for leaving deposits at the central bank, and some banks could earn some interest if they loan money in the real economy. Some analysts, economists believe the actions are not enough to move the lethargic European economy. They need increased aggregate demand, less debt, labor union reforms, better banking and economic cohesion….
In her last congressional meeting, Janet Yellen was asked about the possibility of negative interest rates for the U.S. and she replied with a negative response toward the question. The problem will be, if the U.S. does go into a recession, and with interest rates close to zero, the U.S. fed has run out of effective monetary bullets, and a recession could last much longer than an average recession.
Also, if the economy does get stronger the remainder of this year, the Fed will probably raise rates a few more times causing disruptions in the global equity and debt markets.
Mohamed El Erian wrote a book in 2007, When Markets Collide, explaining that the U.S. was headed for a “new normal” of slower growth. His book has been basically right. He has a new book, The Only Game in Town: Central Banks, Instability, and Avoiding the Next Collapse, in the book he believes that global central banks did a good job of saving the global economy from the Great Recession, but global central banks have run out of effective monetary bullets to stimulate their economies, and their monetary programs and policies have run their course. He suggests many policies that economies could adopt: improving aggregate demand, reducing debt, more cooperation and collaboration among global economic and political leaders, fiscal stimulus, economic and labor reforms…. If economic and political leaders continue to depend too much on monetary policy, the global economy could face another global financial crisis.

The financial media has looked at the main presidential candidates and most agree that Donald Trump’s proposals to initiate tariffs on countries he deems have taken economic advantage of the U.S. would be bad for the U.S. and global economies.
There would be social chaos if he follows through on his proposal to deport 11 to 13 million plus undocumented workers.
Many of these undocumented workers have children that are U.S. citizens. What happens to them and their parents? Also, many of these workers have assets (savings and checking accounts, vehicles, businesses, homes that that they bought with legal relatives). Many Hispanic communities would be devastated, especially in the Southwest. Remember, the U.S. started a war with Mexico in 1846*. The United States did not honor their word to let Mexicans keep the land they owned that the U.S. took from Mexico. Many of these Mexicans had been here many years before Europeans came to the Americas. Like most of the Americas (north, central, south) the Americas were occupied by many different Indian tribes (Indians is a misnomer, they should be called Native Americans), this was true in Mexico. The Native Americans of the Americas were here centuries before the Europeans came.
* From the History Channel The Mexican-American War (1846-1848) marked the first U.S. armed conflict chiefly fought on foreign soil. It pitted a politically divided and militarily unprepared Mexico against the expansionist-minded administration of U.S. President James K. Polk, who believed the United States had a “manifest destiny” to spread across the continent to the Pacific Ocean. A border skirmish along the Rio Grande started off the fighting and was followed by a series of U.S. victories. When the dust cleared, Mexico had lost about one-third of its territory, including nearly all of present-day California, Utah, Nevada, Arizona and New Mexico (CLICK THIS TEXT TO READ MORE ABOUT THE MEXICAN-AMERICAN WAR OF 1846-1848.
Will the U.S. take land, assets from Mexicans again? I doubt Mr. Trump has thought this through. He needs to learn U.S. History.
Below is the map of the U.S. before the U.S.-Mexican War: 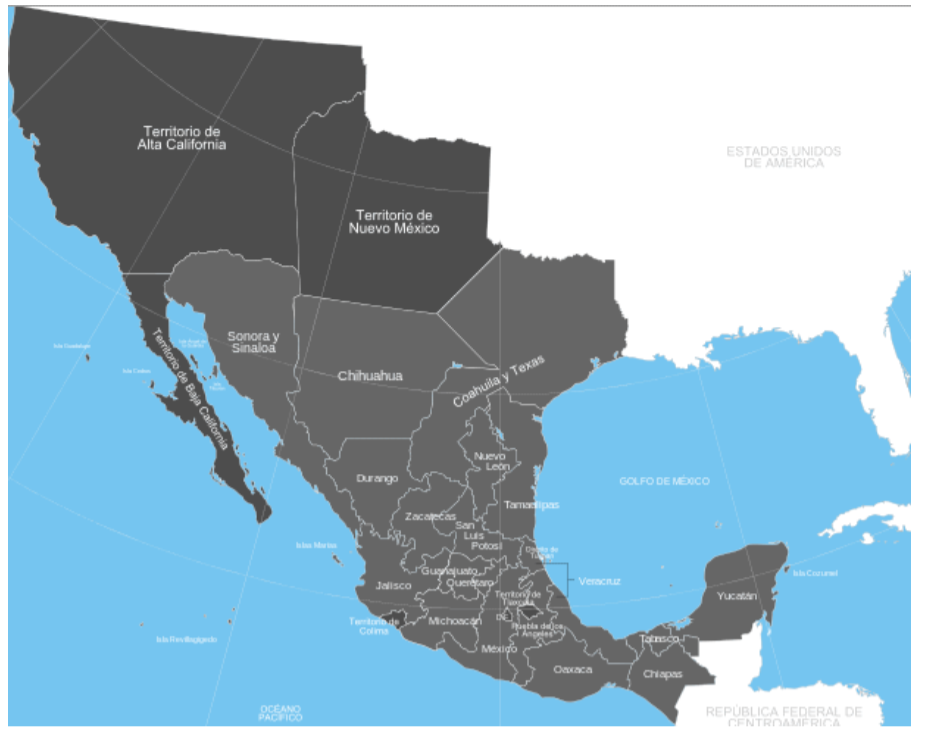 We might not have to worry about this if gambling sites are right. Although, gambling sites are illegal in the U.S., they aren’t overseas.
The bets below show Ms. Clinton having the lowest payouts $1.57, meaning she is expected to win. Donald’s payout are two times more than Ms. Clinton, according to the site below. 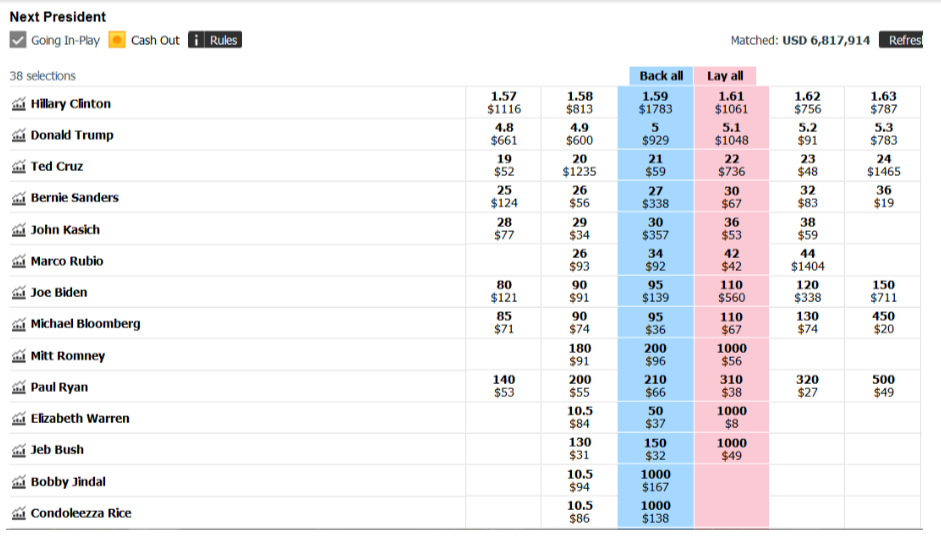 The payouts below are also from another overseas gambling site: 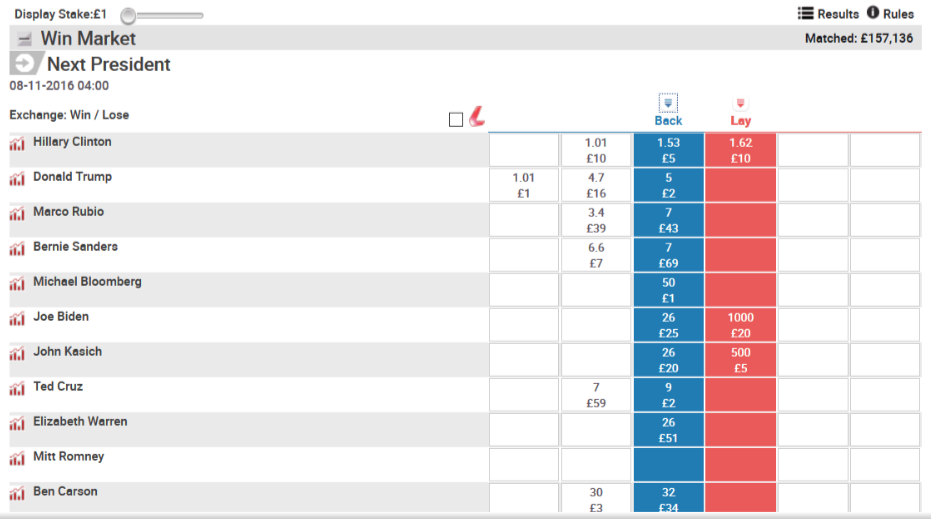 In this site Mr. Trump has more than three times the payout of Ms. Clinton. In other words, these bettors are expecting a Clinton win.
It’s still early to determine a winner, but these betting site were correct in past elections. I will include these bets in future monthly updates.