Below is the current consensus earnings 2016 forecast for the Dow 30:

Most of the stocks that have good growth prospects are overvalued as shown by their high P/Es in yellow highlight.

Price targets are difficult when earnings keep contracting, but to get an idea on where market valuations could be, let’s use current consensus earnings forecasts:

Because earnings forecasts keep moving lower, and risks are rising, I use a lower P/E. As the E of the P/E keeps going lower the outlook for the markets need to be adjusted lower.
Currently, the markets are overvalued.
Earnings for the first quarter 2016 are expected to be down from -6% to -8%. Some analysts expect this quarter to be the trough in earnings, and improvements are expected for the remainder of the year. We will have a better understanding of this after 1st quarter earnings season and company conference calls.

Technicals of Market
The technicals for the market are bearish. Below is a recent bearish chart for the S & P: 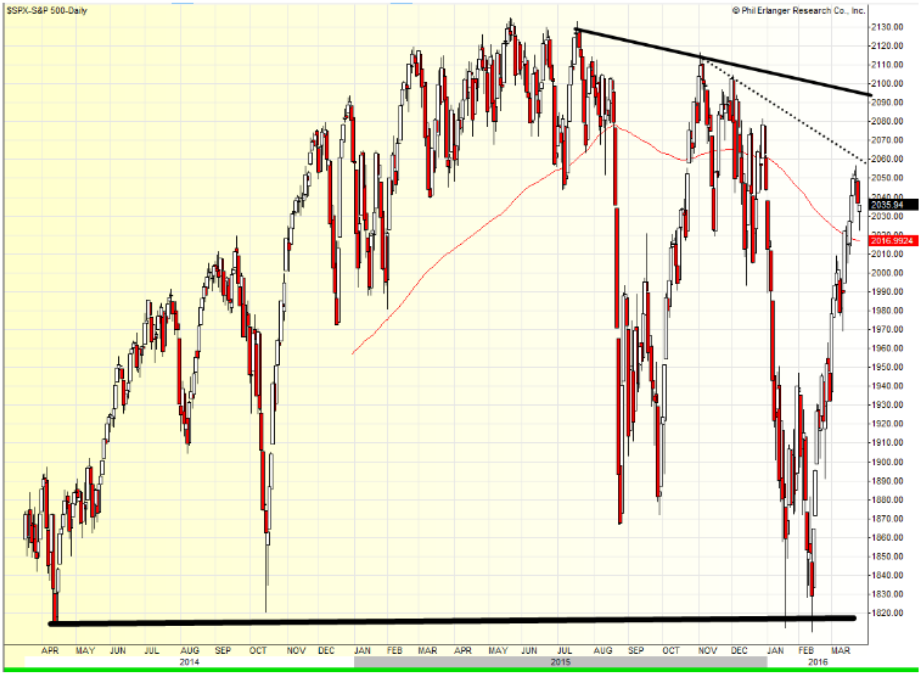 Prices are behaving normally during a major reversal pattern:
1. Prices held support at the 1,820 area, and then rallied.
2. Prices rallied to resistance, the 2,060 area, and we’re seeing some profit taking and selling.
3. The 200-day moving average (red trendline) is trending downward, bearish.
4. The pattern that is being developed is called an umbrella/rounding top major reversal pattern.
Support has taken almost two years to build. This is a very bearish pattern.

There are several scenarios the markets can follow:
1. Markets stuck in trading range.
Fundamentally the economy is fine with job growth, low inflation and interest rates, and slow economic growth. At the current price level, above 2,000, the markets are overvalued.
When prices get to support levels around the 1,820 area, the markets are undervalued if: earnings stop contracting, and the economy and job creation continue.
This scenario could be good for traders. They would buy at the support area, and sell at the resistance area.

2. The bearish trend of the markets continue.
The market could enter a bear market (20% decline from peak of cycle) without a recession. A bear market without a recession happens about 25% of the time. The last time this happened was in 2011. In 2011 the market fell about 20% because of the Arab Spring, the potential for a Greek exit and the potential breakup of the Eurozone, and the triple tragedy in Japan. These were dramatic events, but the global economy was able to recover.
Things are very different in 2016, we can’t expect the same recovery this late in the economic and market cycle.
3. We go into a recession and the market experiences a typical bear market.
Even though our economy is better than most of our trading partners, can our economy continue to be immune from the global economic slowdown and rising geopolitical risks?
The elections could also be key. Normally when there is a dramatic shift in priorities and economic policies, the U.S. has a period of adjustment that have been difficult for the economy and the markets.
Barron’s recently published an article comparing the two presidential front runners and their economic policies and who would be better for investors. Click here to read the article. One candidate’s economic policies could be very disruptive to the U.S. and global economy.
Also, I included this chart in last month’s economic outlook: 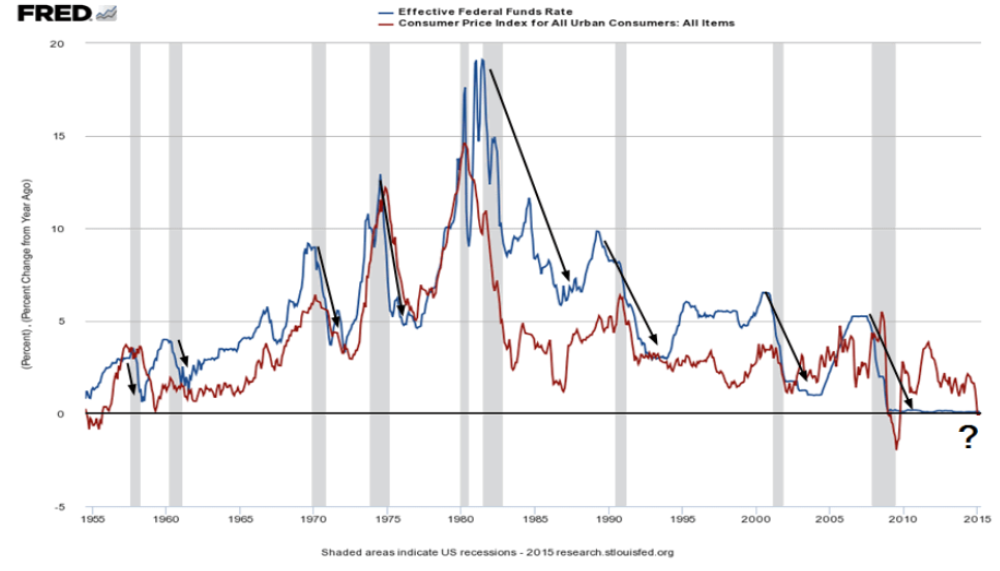 In past recessions the Fed was able to lower rates to stimulate the economy. Notice whenever the economy went into recession, interest rates were lowered. Lower rates is their most effective tool the Fed has, and lower rates have worked in past recessions.
Without this tool, lowering rates, and if we do enter into a recession, the Fed won’t be able to do much, and a recession could last longer than an average recession.
Conclusion
Investors should raise cash, especially if you’ve been in this market since 2009. Here are some of the reasons to do so:
At best we have a trading for 2016. A recession and especially a bear market remain on the table.