At the beginning of the year economists and analysts were concerned about:
Some analysts and investors are focused on falling oil prices as they saw oil prices as a barometer for the global economy (weak oil prices are a result of a weak global economic outlook). Low oil prices are causing bankruptcies, and non-performing loans on banks’ balance sheets, and widening credit spreads. I do address why some of these concerns are incorrect.
Since February, many of these concerns have reversed and the economic outlook improved in the first quarter causing the markets to recover.
Unfortunately the above concerns are reappearing again, plus a few more including: Brexit (the potential exit of Great Britain from the European Union); uncertainty created by the elections and the potential for dramatic changes in economic policies; changing buying patterns by consumers.
The first quarter we did see weakness in terms of profits, capital spending, economic and employment growth.
Also the Fed raising rates is back on the table. Some analysts believe this can happen in July after the vote by the British regarding them leaving the European Union.
GDP
GDP growth is anemic. Here is a chart with the GDP trend: 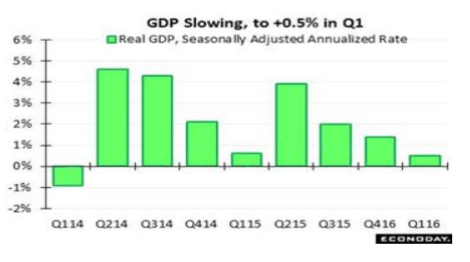 First quarter GDP was up only .5%. Weakness mostly came from trade and capital spending. The consumer continues to spend, more on this below.
Employment
Below is the employment trend: 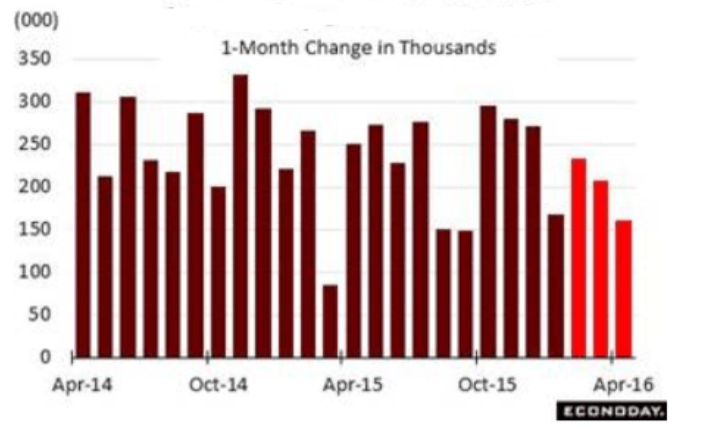 Job creation has been slowing. The April report showed a disappointing 160,000 jobs created, one of the weakest months over the last few years.
Retail
April retail sales were positive and grew a surprising 1.3%.
We do see changing spending habits by consumers. Consumers are more interested in “experiences” (dining, vacations, spending time with friends and family) versus buying “stuff”.
Consumers are also doing more of their buying online and discounters like Walmart. Macy’s, Nordstrom’s, Kohl’s, Target and other retailers had disappointing first quarter sales and earnings.
The stock prices of these retailers reflect these changes: 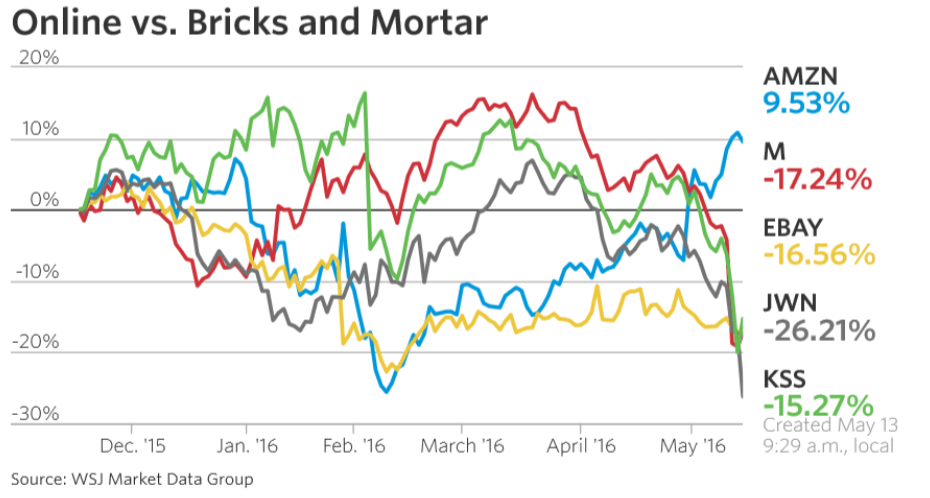 Amazon’s stock is up for the year, Nordstrom’s (symbol JWN) has entered bear market territory. M (Macy’s), EBAY, and Kohl’s (symbol KSS) are down over 15%.
Slowing Capital Spending
Capital spending had picked up in 2013, 2014, helping the U.S. economy, but now capital spending is declining: 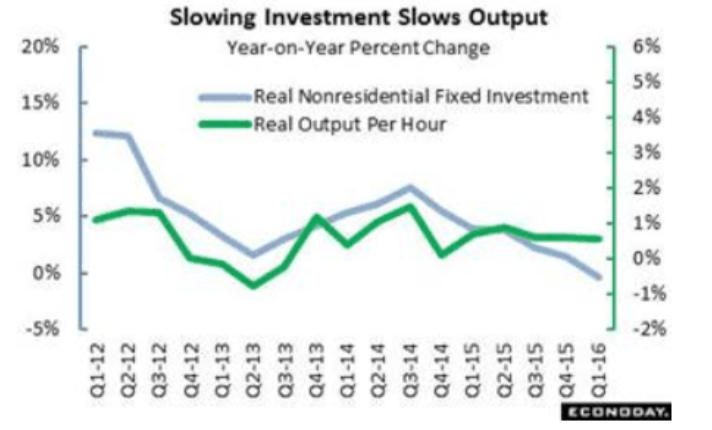 Many of our large international companies are seeing slowing global growth, and in response they are cutting back on their capital spending.
The energy industry has dramatically cut back on capital spending because for most energy companies their costs are greater than the prices they can get for their oil and natural gas in the markets.
Some analysts point out that with lower capital spending we will lead to lower worker productivity, the green trendline in the chart above.
The Big Short: Two Valuable Lessons
My Godson talked me into seeing The Big Short, a film about the housing bubble and the financial crisis of 2008. Click here to read a BusinessWeek review of the movie. I did like the movie. I believe every investor needs to see this movie.
Although I do not fully agree with the movie, it did point out several important lessons for investors:
1. Patience is essential. There is an old adage that “investors are never wrong, we’re just early”. In the movie, one of the main characters identified the real estate bubble in 2006, but the fear phase of the bubble didn’t occur until the announcement of Lehman Brother’s bankruptcy on September 15, 2008. From 2006 to 2008 the investors, speculators in the movie had to endure positions going against them, margin calls, irate clients, and questions about their judgement, intelligence and convictions.
2. Leverage and derivatives are a double edged sword. Leverage can increase revenues and profits. Derivatives can leverage profits and hedge positions. Too much leverage and the use of derivatives can distort the economy and markets. Derivatives and leverage were variables that caused the market crashes of 1987, 1994, 1998, and 2008.
3. One of the praises of the movie was how the movie explained complex investments and concepts using celebrities (see BusinessWeek movie review). Derivatives were an important cause of the financial crisis of 2008, as they were complex and few investors understood them.
Here is the lesson: WHEN IN DOUBT, STAY OUT!! Don’t invest in assets you don’t understand!!!
4. Don’t accept conventional wisdom. Here the conventional wisdom was that real estate prices never go down, and you can always refinance your mortgage. These two illusions proved to be catastrophic to many home owners, real estate investors, our economy and markets. There are many examples of conventional wisdom turning out to be wrong. In the 1980s, the conventional wisdom was that default rates on junk bonds were very low. Mike Milken and Drexel Burnham Lambert built a huge business from this wisdom and talked many companies into issuing junk bonds and sold these junk bonds to investors especially to Savings and Loans. This eventually led to the bankruptcy of the Federal Savings Loan Insurance Corporation and the end of the Savings and Loans industry.
Today the conventional wisdom is that the U.S. economy is doing well, and that watching oil prices is a key to the directions of the economy and markets. Let’s look at these accepted viewpoints.
Today’s Conventional Wisdom
Conventional Wisdom: The U.S. economy is doing fine.
The U.S. economy is doing better than most of our trading partners, but U.S. investors are too U.S. centric and are not factoring in the many global risks that should be a concern:
Yes, conventional wisdom is correct that the U.S. is doing better than the rest of its trading partners. This outlook causes investors to stay fully invested, when global risks are rising and are impacting our economy and markets.
Conventional wisdom: Oil prices are an indicator of the strength or weakness of the global economy.
Below is a 10-year chart of oil prices: