2017 is a surprisingly strong year for equity markets around the world, but unfortunately U.S. markets continue to be overvalued, expensive.

2017 is essentially over. I will have my economic and market outlook issued in December and January.

Bullish Case and Why Markets Are Stronger in 2017

Where have the companies gone: mergers and acquisitions, buyouts by private equity, bankruptcies (especially during the dot-com bubble), and some have gone private.

Below are some of the reasons why this market is so different:

This also means many investors don’t want to get out of this market.

Here is chart that shows buying the dips in U.S. and overseas markets for 2017: 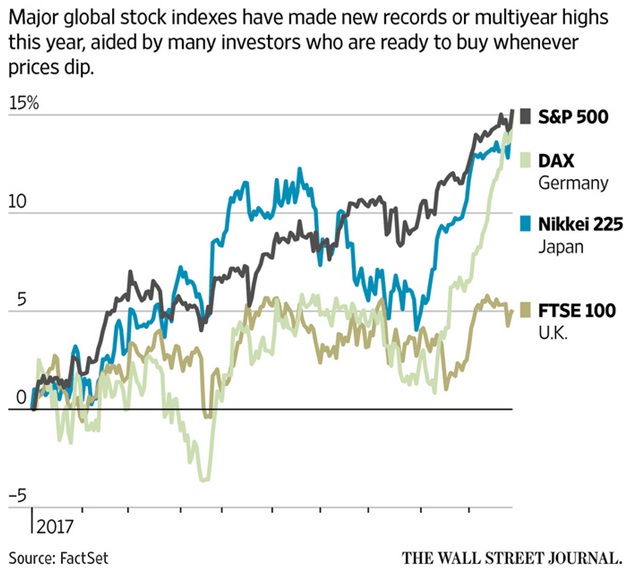 The chart also shows the rotation in global markets. More on this in the bearish section, rotation by investors and traders.

Global growth is better in 2017, but not great. According to the IMF’s above table, growth will slow down next year.

Higher oil prices could lead to higher inflation and interest rates, and both could throw the global economy into a recession. Higher oil prices historically have caused several U.S. and global recessions.
We could see oil supply disruptions from Venezuela because of their political and financial crises.

As the chart above shows, Venezuela provides about 9% of our oil needs. Iraq exports about 7 ½% of our oil demand. Again, if we have supply disruptions globally this could cause the global economy to go into a recession. The biggest threat to global supplies is Venezuela. 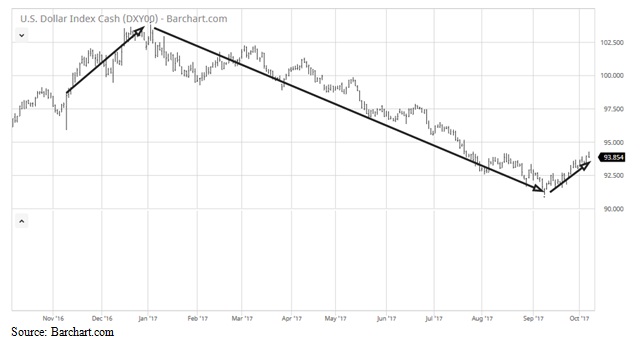 The dollar initially fell when President Trump was elected, but his pro-business agenda gained the confidence of the markets and the dollar rallied.

As the market realized the many challenges facing the new president domestically and internationally, the dollar fell.

The dollar is starting to rise due to: the potential stimulus of tax cuts and reform, interest rates will probably continue to rise, the Fed will start reducing its balance sheet as explained above. The higher rates makes the dollar more attractive and the dollar is attracting foreign investors and speculators.

Momentum investing focuses on buying stocks that have price and earnings momentum, especially companies that can beat earnings estimates. If a stock does not have earnings or price momentum, it will probably be left behind. See valuation section.

There also seems to be less of a concern for valuations.
Investors favor technology stocks despite their rich valuations. 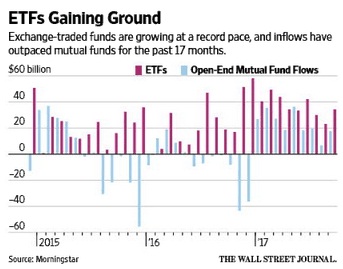 Below is a list of the top 10 asset managers. The top three mostly provide ETFs. 20 years ago the list would have been all mutual fund companies. The ETF industry started around 1993. 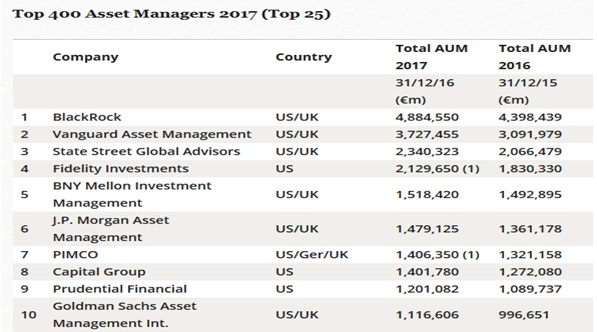 BlackRock, Vanguard, and State Street are the largest money managers in the world with trillions under management. Most of their assets are in ETFs. The rest of the list represents traditional active mutual fund and money managers.

In the past, 401K investors had most of their money in money market funds and company stocks. The retirement investment industry and regulators rightly believed that was not good. Target funds (invest in stocks, bonds or cash depending on age and expected retirement year) were developed by the investment industry to help 401k investors. Now most monthly contributions get invested in the markets despite valuations.

Price appreciation is outpacing growth in earnings, a sign that the market is overvalued as the chart below shows:

At the beginning of the market cycle (from about 2009 to 2013) EPS (earnings per share) were growing faster than prices. This is a time for investors to be fully invested and aggressive.

From around 2014 to 2016 earnings stalled, and so did market prices. By 2014, most markets more than doubled in value, and market returns would have been an average of 20% return per year.

This year market prices are growing much faster than EPS. This is a time to be cautious because earnings are growing faster than prices, not a sustainable trend, especially this late in the market and economic cycle.

If we look under the hood of the markets’ EPS, we’ll see that earnings aren’t growing as fast as they seem: 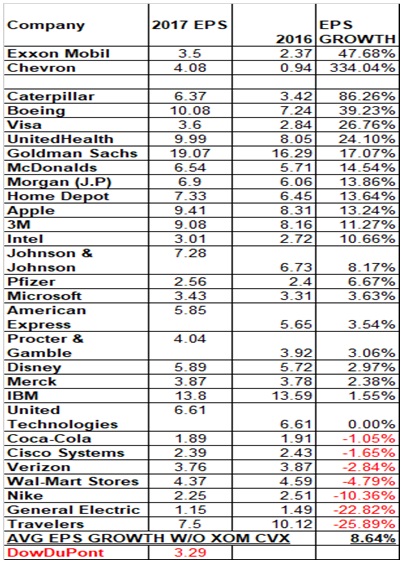 Exxon and Chevron, despite having the fastest EPS growth rates, the stocks are down for the year.

If we take out Exxon and Chevron, the average EPS for 2017 is about 8.64%, but the Dow 30 is up about 20%. Again, the trend that price appreciation is outpacing earnings growth is not sustainable.

This market is rewarding momentum investing: a focus on stocks that have a bullish bias, and its EPS reports are beating estimates. Exxon and Chevron, are meeting EPS expectations, but their stock prices have a bearish bias, so investors in this market are basically ignoring stocks like XOM and CVX that don’t have price or earnings momentum.

Let’s look at Apple that has price and earnings momentum. Apple is up over 50% this year and earnings for the last few years were essentially flat.

Apple’s year starts in September, so fiscal 2018 earnings are expected to be up about 24% thanks to the new iPhone. Notice that earnings contract dramatically to about 6% in 2019, 2020. What will happen to the P/E and stock price when this happens?

Besides earnings momentum for fiscal 2018, its stock price also has momentum: 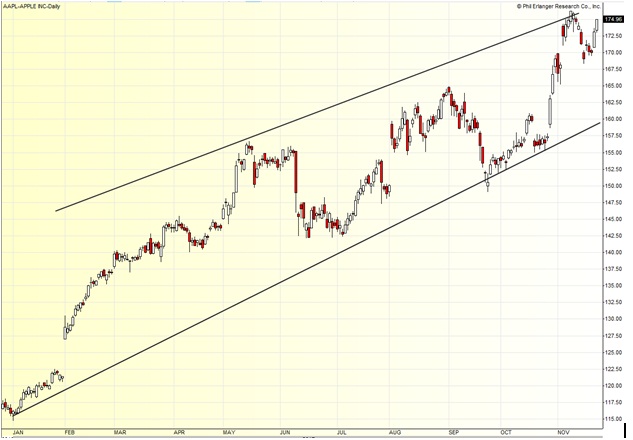 Apple has a bullish bias with a rising tops and bottoms trendline.

Here are my price targets for the markets:

I use reasonable P/Es to value the markets. The markets are overvalued this year and next. The P/E could expand again, but this would continue to make the markets overvalued.

One of the main reasons why this market has been strong is because once prices break to new highs, most of the resistance and supply is gone, and it will be easy for prices to continue to make new highs. I rarely hear market analysts on cable financial news talk about this. Below is a long-term chart that shows the breakouts and new highs over the last 18 years: 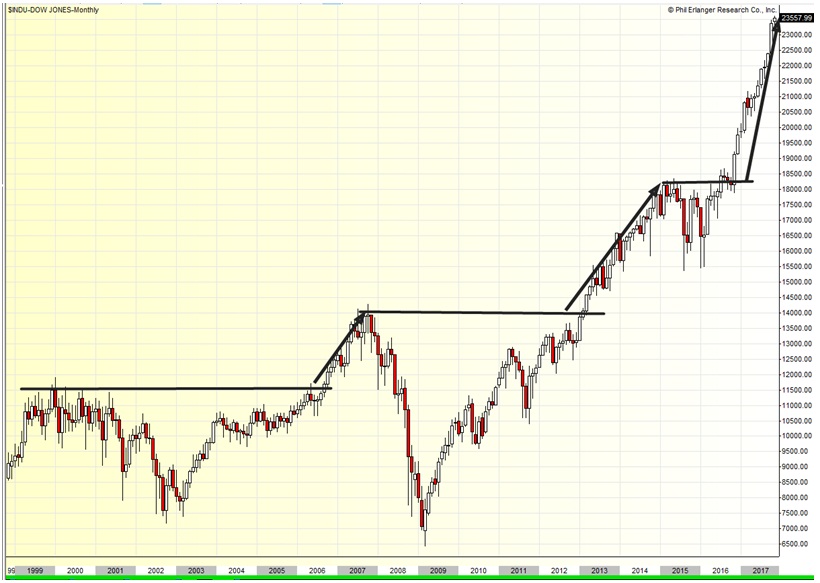 Let’s review the chart and breakouts: 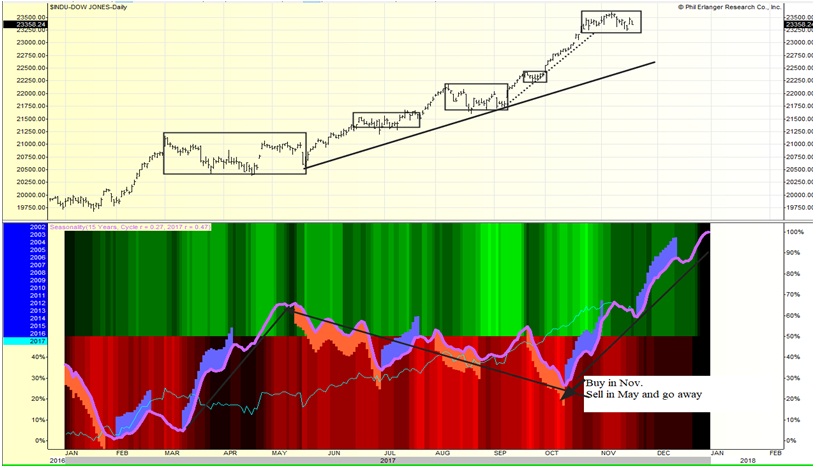 Normally the market anticipates its prospects for the following year in November and most of the gains for the next year end around May in the new year. This is why some traders and investors “sell in May and go away.”

September is a weak month when there is profit taking after a summer rally. We did not have much selling in September.

October is normally weak due to tax selling by mutual funds for reporting reasons. We did not have a weak October. It will be interesting to see if the market will be strong in November and December anticipating a continued expanding economy. This economic and market cycle are lasting longer than most cycles.

I’m waiting for better valuations and stocks that are in bear market territories.

Where to find Value in the Markets

Stocks with momentum are doing well – for now, but many stocks are being left behind. Some of these stocks are creating investment opportunities. Some consumer staples, retailing, energy, and telecommunication stocks are examples.

Below is a bear market chart of Occidental Petroleum (symbol OXY): 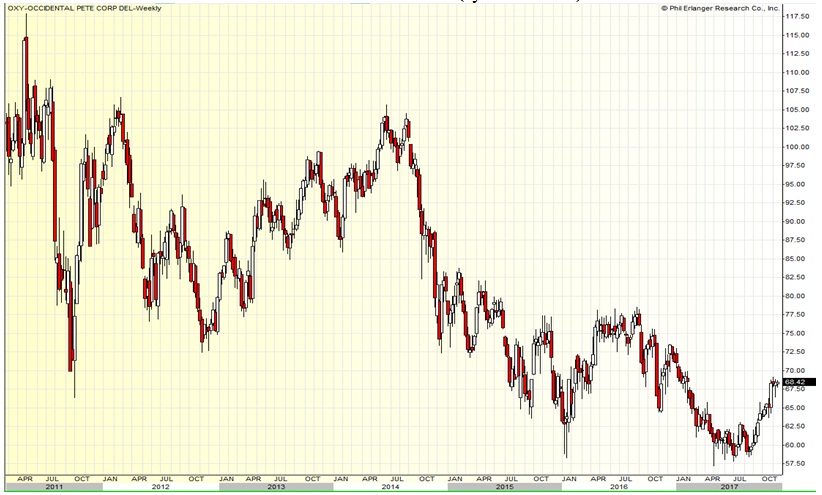 OXY is in a bear market, and is down about 40% from its high of about $115. When identifying potential investments in bear markets, we need to see prices make a new low for the year, and then prices base, move sideways. OXY probably did see its low in April and has been basing since. The stock has rallied about 15% from its low, thanks to rising oil prices.

OXY currently has proved reserves of about 2.2 billion barrels of oil equivalent. If oil prices continue to move a little higher and stabilize, they could report proved reserves of about 3 billion. This would make their reserves worth about $17 a barrel, cheap. They have other businesses (chemical, marketing and retail, transportation and storage of energy) worth billions that make the stock a bargain.

OXY is the type of stocks that I’ve been accumulating for my clients and myself.

We can also trade the basing pattern, trading range of stocks like OXY.

OXY is not a recommendation, and is for educational purposes only.

My economic and market outlooks will be out in December and January.