Most investment professionals such as myself try to invest in assets (stocks, bonds, commodities, real estate) that are undervalued, and wait for them to get to fair to overvalued and then liquidate. The problem for us value/fundamental investors is that most stocks and markets are currently overvalued, and this market is in the late stages of this economic and market cycle.

Some of the changes may include:

What are the Markets Indicating Regarding the New Administration?

Below is a chart of the last two years. 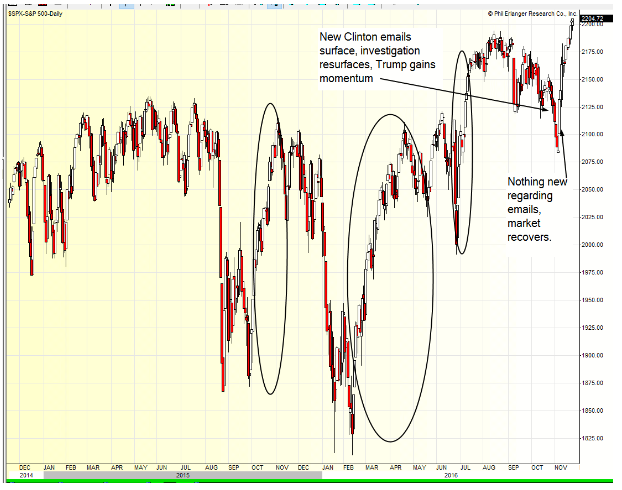 Let’s review the above chart:

This means investors and traders will have to be more active. I spelled out my strategy for these markets in my August Market Outlook. Click here to read the article.

Valuations longer term are more important than price movements, and again the markets and many stocks are overvalued.

Here is what happened in the futures market the night of the election: 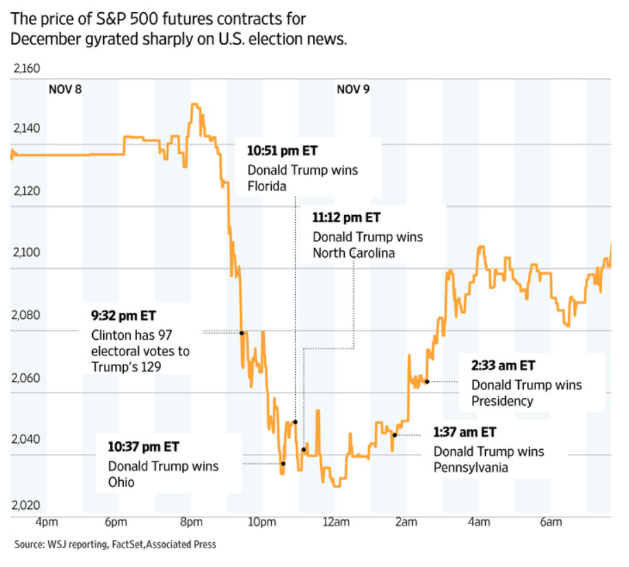 On the night of the election when it looked like the Donald Trump was going to win, the futures markets crashed about 5% (the Dow Jones Industrial Average futures fell almost 1,000 points at one point).

Donald Trump’s victory speech was conciliatory, so the markets did recover.

Before the markets opened, some of Trump’s economic advisors were on the cable financial channels pounding the table that Trump’s economic policies were pro-growth, pro-business and good for the economy and investors.

Many traders, money managers and investors are conservatives and Republicans, so their fear and uncertainty transformed into bullishness. The market has been in rally mode since November 9 th .

One of the hardest jobs of an investor is to forecast and understand the future. No one can consistently and accurately predict the future. So, let’s look at some knowns. Republicans will control the Presidency, Congress, Senate, and the Supreme Court.

The new administration and Republicans economic priorities include:

President elect Trump and his administration has other priorities including repealing the Affordable Care Act, the southern border and immigration, spending on the military.

One of the main unknowns is what will the new administration look like? Ronald Reagan said that “personnel is policy.” This is a real wild card. Will they be the most qualified or loyalists, extreme or middle of the road, ideologues or data driven decision makers?

Below are some early consensus forecasts from a consensus of economists: 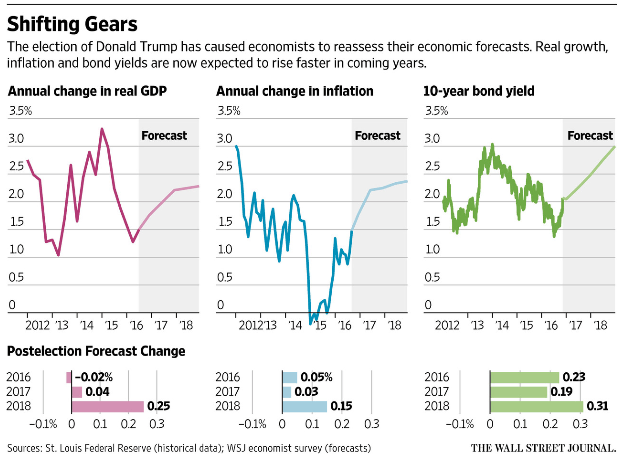 President elect Trump did say in his campaign that his goal was to grow the economy about 4% to 6%. At this point, a consensus of economists are forecasting growth of 2.3%. Also, as mentioned above inflation and interest rates are forecasted to move higher.

I wrote a research article, ”Update on the New Normal”, about the view that the U.S. economy has been and will face slower growth. Click here to read the article. I’m not surprised to see GDP forecasts below historical growth rates.

My outlook for the markets has not changed much. The U.S. economy is fine, but there are many concerns outside our borders: China, Brexit and other European elections, Japan, North Korea, the proxy war in Syria, ISIS, Iran, and potential trade wars with some of our trading partners.

I’m also concerned about overvaluation of the markets and most stocks, the aging of this economic and market cycle.

The markets are doing well for the following reasons:

For now, investors are giving the new administration the benefit of the doubt. There are sobering concerns for investors: