Infrastructure spending could be the most important economic effort the Trump administration pursues.

Infrastructure spending could be the most important economic effort the Trump administration pursues. The benefits include:

President Trump would like to spend about $1 trillion over a 10 year period, about $100 billion a year.

The multiplier effect for infrastructure spending is positive:

Where governments make mistakes is how the investment dollars are allocated for political reasons versus decisions based on the return on investment and multiplier impact. China and Japan are famous for spending capital for political reasons, and much of the spending is wasted. Will the Trump administration spend the money on states that helped him get elected, or will the administration do their homework and judiciously invest the money where it’s really needed and has a strong multiplier effect.

The multiplier effect for infrastructure spending could be as high as 2.25 times. If the infrastructure investing becomes political, then the multiple would probably be about .5X. There have been several stories in the financial press that President Trump does put a premium on loyalty, therefore we can anticipate the investing may not be optimal.

If we invest $100 billion a year, the increase to GDP growth could be about $125 million (multiplier 1.25, in the middle of the multiplier effect range). The $100 billion spending with a trillion dollar economy could increase it about .025%. We could grow from the current growth rate of about GDP 2% to about 2.025%.

When will this happen? We can look at the $875 billion stimulus program of the previous administration. Some of the money was spent on hiring back police and teachers and did not have the multiplier impact that was needed, even though hiring police and teachers are important.

Another problem with the stimulus program was the planning for projects including studies, permits, hiring of labor and procurement of equipment and materials. Large projects take years to plan and more to complete. Experts point out that large projects can take 10 to 20 years to complete (repairs to the Oakland Bay California bridge damaged by the 1989 earthquake took about 20 years, 16 years to dredge the harbor in Savanah Georgia).

President Trump is working on cutting red tape and to expedite certain projects, but some of these studies and permits are done at the local level that the administration does not have jurisdiction over. It will take time to plan, hire and have an impact on GDP growth. The first hires probably won’t be until late 2018 or 2019 (see calendar of economic agenda below), and most of the jobs will be temporary not permanent.

Another problem, the President’s economic agenda is behind schedule: 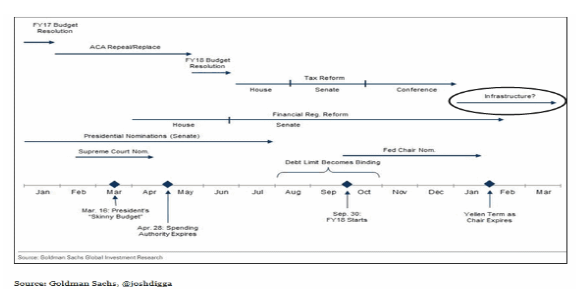 Repeal/Replace ACA is way behind schedule pushing out other economic plans. Tax reform was planned to start soon, but it will be delayed, some say late 2017, early 2018. Infrastructure spending was supposed to be started late in 2017, but the middle to late 2018 is more likely.

Because of the temporary nature of these jobs and the uncertainty of if and when may disappoint many of Trump’s supporters who were counting on his word to create millions of high paying jobs.

Below is a chart that shows the age and percentage of U.S. all infrastructure spending:

Infrastructure in the U.S. is aging.

Even though total infrastructure spending (local, state and federal) was $612.5 billion in 2015, it has been falling.

Below are the ages and percentage of spending for certain areas of U.S. infrastructure in order of importance:

Water is essential for most forms of life. Certain parts of the country go through droughts, so they can’t afford to waste this precious resource. 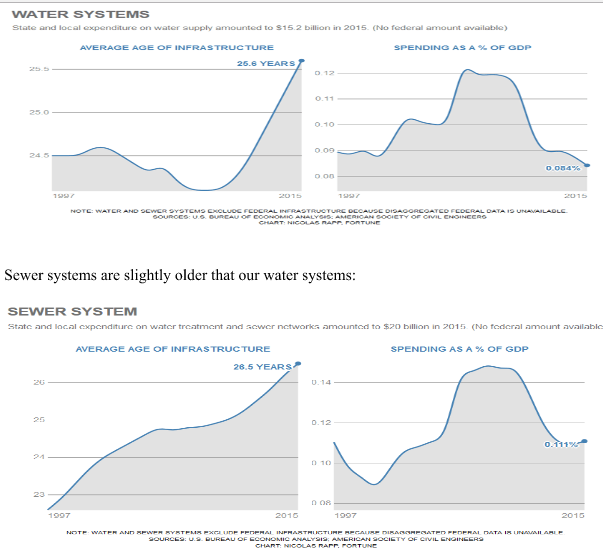 Highways and streets are old and are in need of repair: 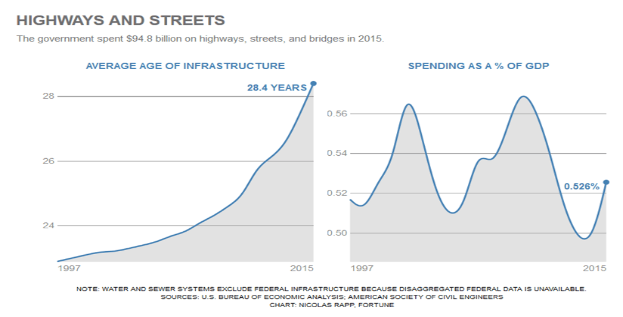 The Transportation Department pegs transportation infrastructure needs about $1 trillion. In 2009, the American Recovery and Reinvestment Act earmarked $48 billion for transportation. It took until January 2012 to spend $33.50 billion.

Airports, ports, roads, freeways are important to keep our economy moving and productive.

All types of educational facilities are old and spending has dropped significantly, but was still $67.5 billion in 2015. 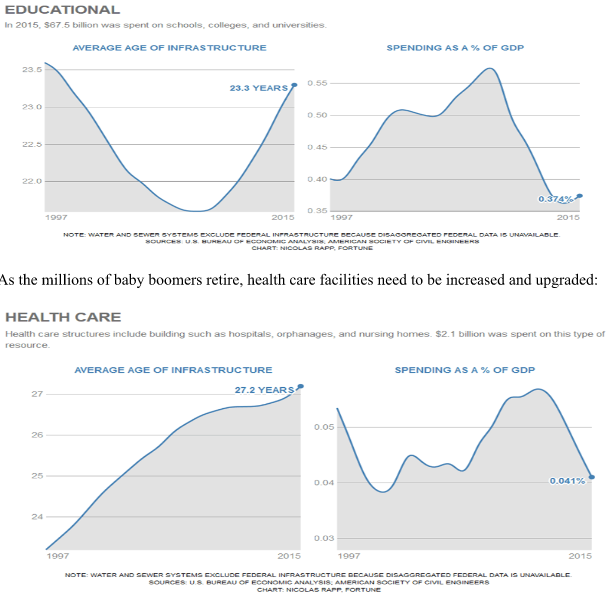 The American Society of Civil Engineers issued a report “Failure to Act” have estimated that inadequate infrastructure spending could cost the U.S. almost $4 trillion in GDP, and as much as $14 trillion in the very long-term if we don’t invest in the nation’s infrastructure. The organization gave our nation’s roads, bridges, water systems, schools, airports and ports a D+. A big concern are 85,000 bridges and 14,000 dams.

Another study by economist Laurence Kotlikoff concludes that by not repairing our infrastructure it costs us in the terms of time wasted, opportunities lost, and even lives.

How to Pay for Infrastructure Spending

President Trump hasn’t detailed how his infrastructure plan will be funded or what types of projects it will include.

The concern among deficit and budget hawks is how the investing will be paid for and they want to avoid more deficits and debts. This will be difficult, especially when we consider how much tax cuts if implemented could lower government revenue.

Below are some of the ideas to help finance the much needed infrastructure projects:

Again, there are not definitive plans on where the money will be spent or how it will be funded.Summary

I will probably issue two more research reports on Trumponomics: deregulation and a summary