President Trump believes that deregulation, lower taxes, and infrastructure spending will help the economy grow faster, and his economic agenda could help create millions of high paying jobs for his supporters.

President Trump believes that deregulation, lower taxes, and infrastructure spending will help the economy grow faster, and his economic agenda could help create millions of high paying jobs for his supporters.

There are many academic studies that analyze the economic policies, conditions that create faster growth and prosperity in the U.S., below is a partial list: 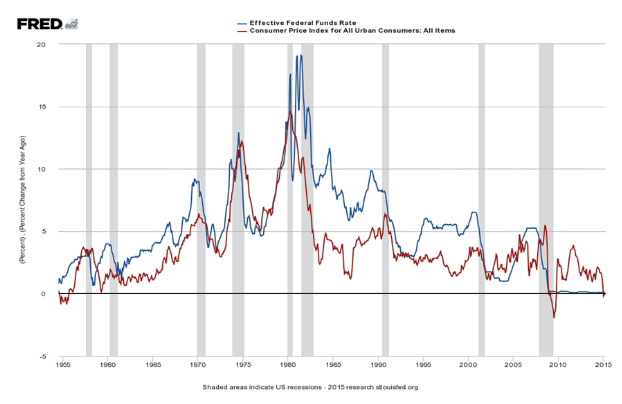 Inflation, interest rates are at historical lows and they have helped our economy recover. But, there is a reversal of the strong stimulative monetary policies and efforts implemented to deal with the Great Recession that started in 2008; the Fed is raising interest rates and they will begin unwinding its $4.5 trillion balance sheet.

Also, there are questions as to whether President Trump will keep Janet Yellen as Chairperson of the Federal Reserve; her term is up next February.

The reversal of monetary policies of this cycle, the questions on who will led the Fed could cause disruptions in the economy and volatility in the markets.

We do have low inflation, interest rates and oil prices, but we have historically subpar growth. Review my research article that explains why we have had subpar growth for the last 17 years, and will probably have subpar growth for the foreseeable future. Click here to study the article, Trumponomics, and the New Normal.There is not a lot of history or research that shows the economic impact of deregulation, but this report does analyze what we do know.During the presidential campaign candidate Trump said. “I would say 70% of regulations can go.”The new administration is behind on its economic agenda. Below is a calendar provided by Goldman Sachs: 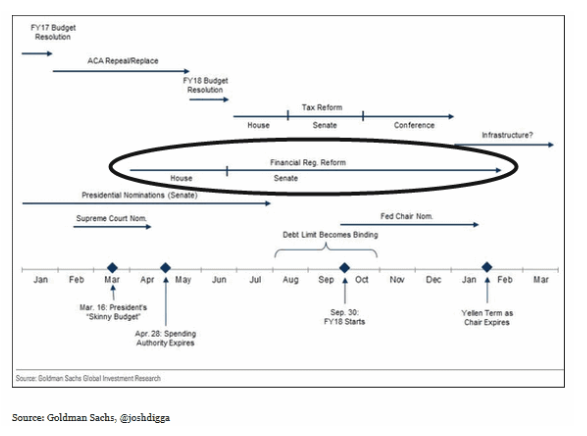 The administration’s economic agenda is behind schedule including deregulation. The President has issued a few executive orders to cut red tape.

History of Deregulation and Why It Continues to Grow

If you ask any entrepreneur, CEO they will complain that regulations are expensive and onerous. Healthcare is their number one concern, “unreasonable government regulations” is concern number two.

Below are charts that show the history, and costs of regulations, and the many programs under different presidents to reform regulations: 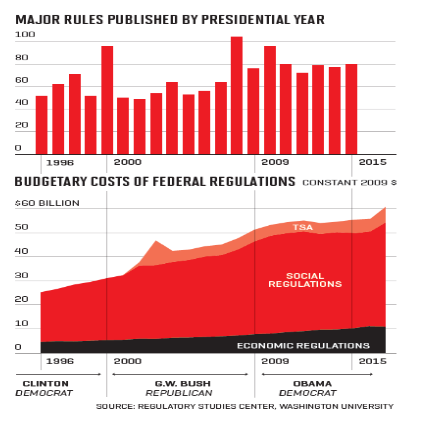 We have an $18 trillion economy, regulatory costs to the economy is about $63 billion. A fraction of the size of our economy. 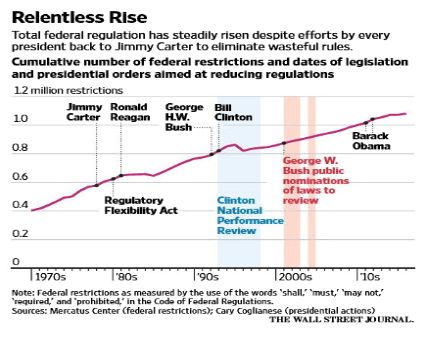 The Obama administration was one of the most prolific producers of regulations. Most of the regulations came from the Dodd-Frank bill dealing with the financial crisis of 2008 and the Affordable Care Act (Obama Care).

According to my research, the reason why regulation continues to grow include: