This is the final research report on Trumponomics. All together there are six parts including this report.

Below are the links to all five reports and a brief summary of each report.​​​

The New Normal and Trumponomics

The first report is about Trumponomics and the “New Normal”. I review the idea of the “New Normal” where the U.S. economy is facing a new period of slower growth. I go over the many reasons (law of large numbers, too much debt, less spending by baby boomers and millennials, outsourcing, automation, the fall of communism and the rise of the Chinese economy as a
competitor…) for our slower growth.

President Trump campaigned to get the economy growing 4% to 6%. This would be difficult for
any president to achieve. Below is one of the key charts from the report: 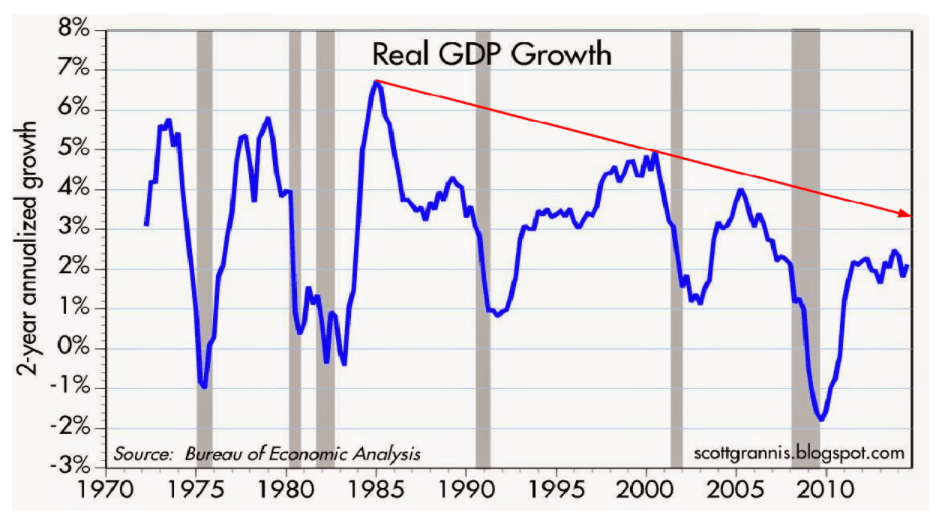 Again, achieving a sustained growth rate of 3% or higher this late in the cycle with an $18 trillion economy would be difficult to achieve for any president.

His economic focus on the above economic efforts could be stimulative, but they’ve never been tried this late in an economic cycle. Taxes and spending are normally done at the start of a cycle to give it a boost.

Below is a chart that shows this economic cycle, if it continues, could be one of the longest post WWII: 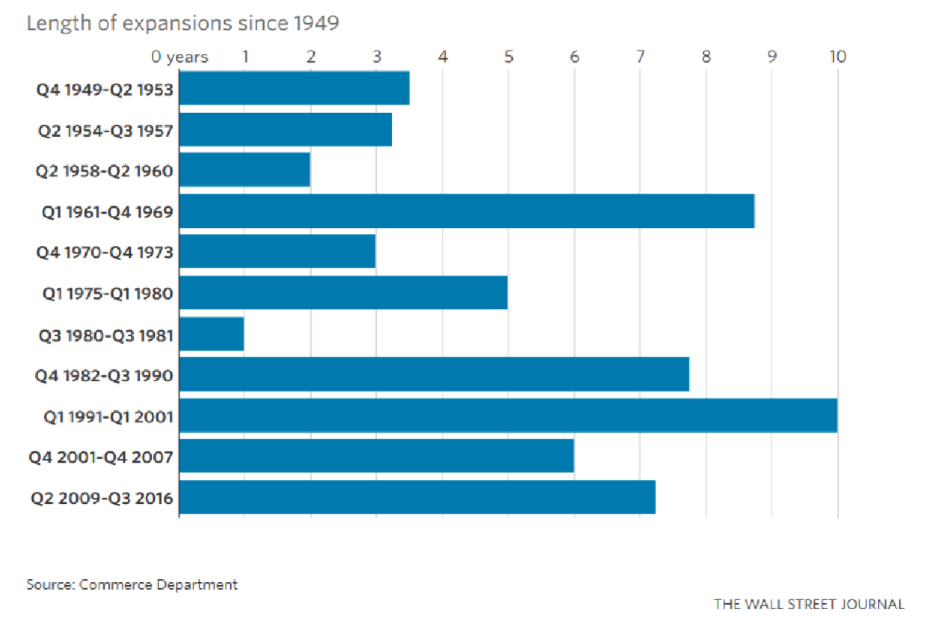 The average economic cycle lasts about four to six years. We have entered the ninth year of this economic cycle. If we go into a recession within the next year that would be normal.

Although Parts 2, 3, 4 go over President Trump’s economic agenda, in Part 1 I analyze other issues facing the country and President Trump: geopolitical concerns, his cabinet, trade deficits, a divided Republican party, social unrest, Trump’s scandals and personality. There are many headwinds facing President Trump, and many question whether he is up for the challenge. Again, the challenges the U.S. faces would be difficult for any president. One of concerns many economists and analysts have regarding President Trump is talk about raising tariffs on some of our trading partners where there are large trade deficits. Raising tariffs can lead to trade wars that can lead to a global recession.

Trumponomics Part 2, Taxes
Presidents’ Reagan and Bush did implement tax cuts with mixed results. Briefly, the belief that tax cuts will stimulate the economy and will increase tax revenues to the Treasury is called supply side economics.

The negative side-effect of tax cuts is that our deficits and debts grow when you take in less money, but spend the same or more (again, supply side economics has proven to not work). Cutting taxes now will make our debts worse than it has in the past, but this time we have baby
boomers retiring that will cause Social Security and Medicare expenditures to explode. A bad time for tax cuts. 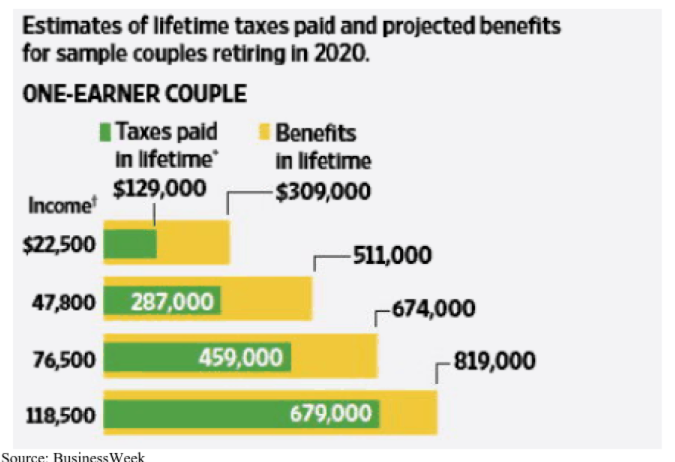 When most people pay their taxes, the majority of their taxes are for their Social Security and Medicare benefits. Again, as the above chart shows, their benefits are much larger than the taxes they paid. In other words, the taxes that most people pay, they will get back in Social Security and Medicare, and then some. This is especially true if you have a long life, and health issues at the end of a life.

The lowest income group pays about $129,000 in taxes, but get about $309,000 in benefits in their lifetime, more than twice the amount they paid in taxes. We must remember that if your income is only $22,500, your economic life is difficult, and many of your choices (having a family, housing, transportation, food) are very limited.

Because lower income tax payers get more benefits, the amount of tax cuts they could receive is limited. This includes the middle-class. Because high income tax payers pay more in taxes, the government could theoretically afford to give them more tax cuts. They do get substantial benefits.

President Trump also wanted to bring down corporate taxes to 15%. Most analysts and politicians don’t believe this could happen because of our high deficits and debts. Many believe corporate tax cuts will come down to about 20% to 25%. Below is a chart that shows the tax rate
of many S & P corporations: 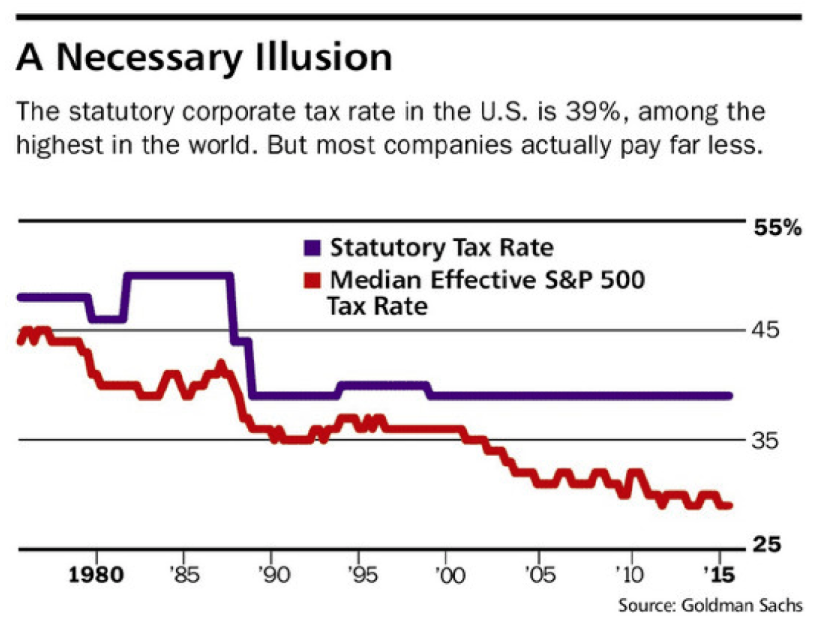 If the average tax rate is about 27% and it’s brought down to 22% that is not much of a tax cut and stimulus.

In the report I also analyze the prospects of repatriation of overseas corporate profits. This was tried in 2004 and it did not have the economic impact that was expected.

Again, in this report I basically explain how supply side economics has not worked in the past and will probably not work now. We are late in this economic cycle and the massive debts and deficits we face make big tax cuts a bad idea for the economy.

Corporate tax cuts could help shareholders with more money in corporate coffers, but normally not the economy on a sustained basis.

Infrastructure spending is the most needed and important economic effort the Trump administration will pursue. The plans could stimulate the economy, put lots of people to work at high paying jobs (these jobs will probably not be permanent, but temporary), and make our
country more productive and safer. 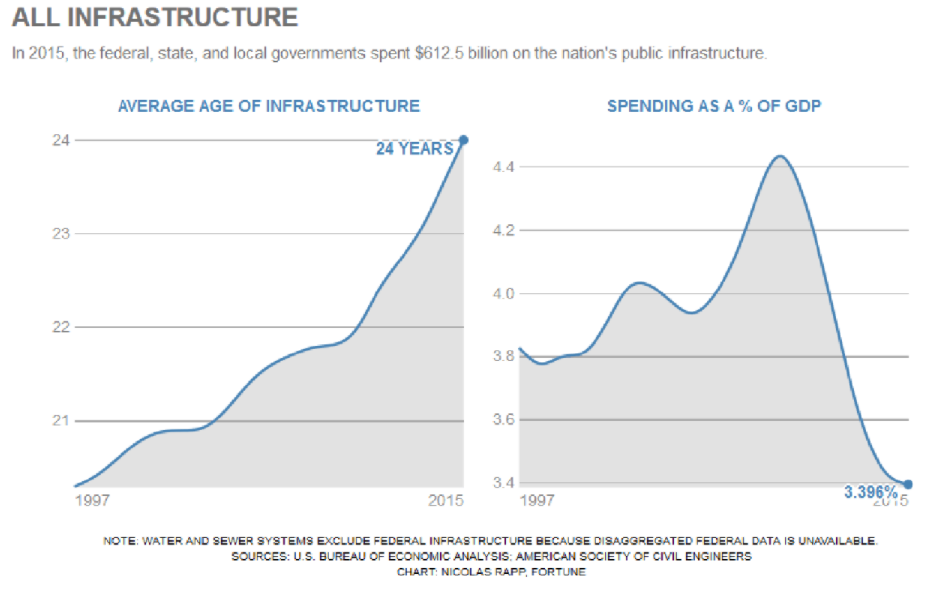 As the chart shows, we need to invest in our nation’s infrastructure (airports, roads, bridges, sea ports, water and sewer infrastructure….).

We don’t know when this will happen, what projects will be undertaken, and how the infrastructure investments will be financed.
Click here to read Trumponomics Part 3, Infrastructure Spending.

Deregulation has been tried by every president since Jimmy Carter with little success. Below is a chart that shows the history of deregulation efforts: 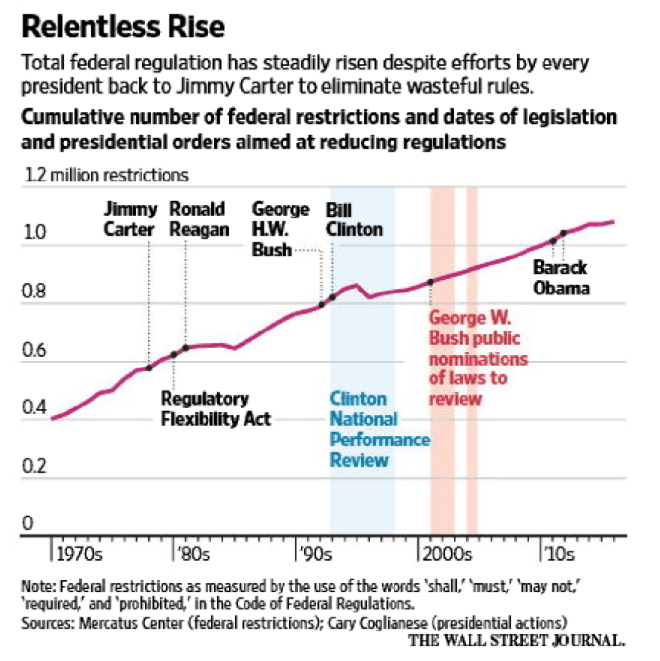 In this report I do review why regulations keep growing and the challenge of rolling them back.

Below is a calendar from Goldman Sachs that shows the President’s agenda: 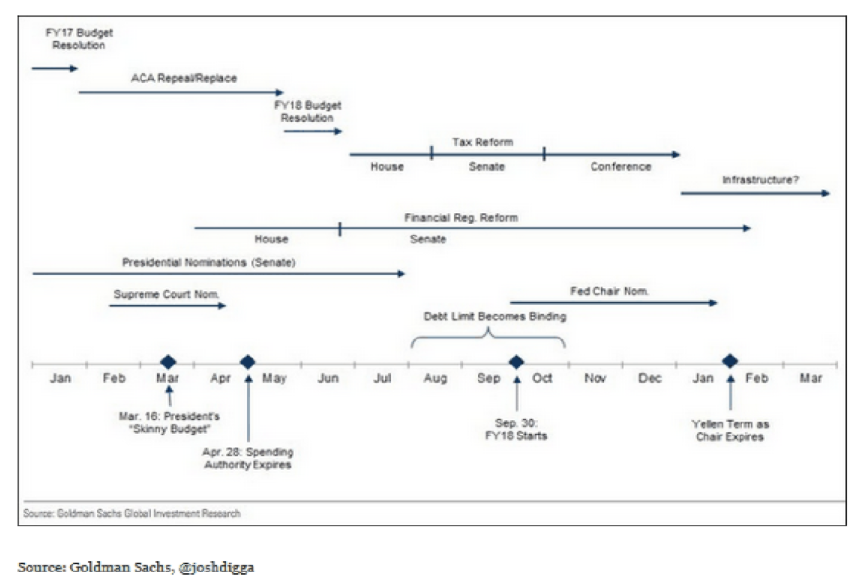 As the calendar above shows, the President has not passed any significant legislation that would help him achieve his goals. He also behind schedule in most of his economic plans. He has not created millions of high paying jobs (including bringing back jobs from China and Mexico) that
many of his supporters are counting on.

The President’s scandals and Russian investigations has gotten in the way of his work on his economic plans. A recent article in BusinessWeek posed the question, Would You Let Trump Run Your Company? The article is very critical of President Trump and summarizes their critique by
writing: “Behind this list of individual transgressions sit four larger failings: This CEO-in- chief has failed to get things done; he has failed to build a strong team, especially in domestic policy; he hasn’t dealt with conflicts of interest; and his communications is in shambles.”

Russia, Russia, Russia
Many of us are tired of hearing about Russia, but it’s a very serious matter. The Russian’s interfered in our elections and democracy. The headlines and investigations, among other distractions are getting in the way of the President achieving his economic goals including creating millions of high paying jobs for those who are being left behind in this economy.

Below are a few articles about President Trump, his team and their Russian business dealings.
The articles are from BusinessWeek Bloomberg, Fortune Magazine and the Wall Street Journal.

Behind Trump’s Russia Romance, There’s a Tower Full of Oligarchs

“Down on his luck, the mogul found help from émigrés from the old Soviet empire.”

Will Trump Rescue the Oligarch in the Gilded Cage?

This and other articles describe the island of Cyprus and how it’s known as a banking and money laundering country for Russia’s rich and oligarchs. It’s reported that Paul Manafort had about 10 bank accounts in Cyprus.

Having Paul Manafort as campaign manager with his ties to the Ukraine and Russia was a mistake for then presidential candidate Trump. The Special Council, Robert Mueller, has hired many lawyers and FBI agents that are following the money of Mr. Manafort, Donald Trump and the rest of the Trump campaign team. There will probably be more headlines about Russia and President Trump and his presidential campaign team.

The Multiplier Effect
The other important graph from my research is the multiplier effect (the impact of a dollar spent
in the economy) of different fiscal policies. 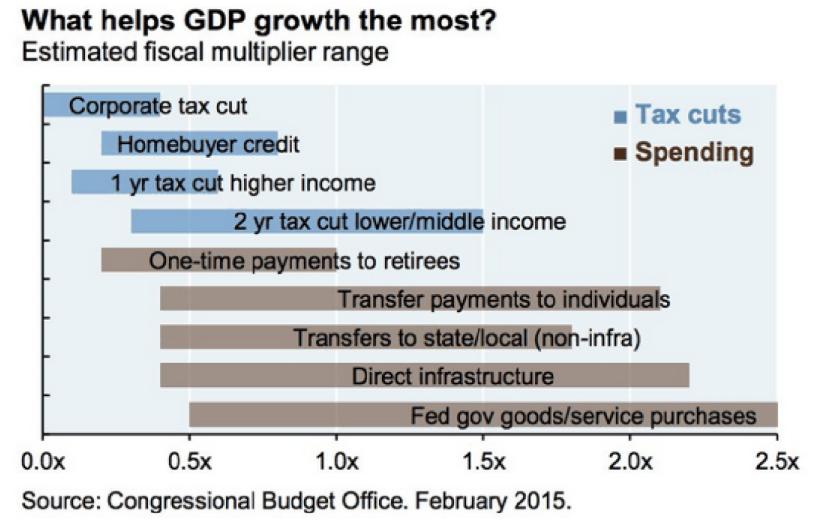 As the graph shows, infrastructure spending has a higher multiplier effect than tax cuts for corporations and for high income earners.

The President should focus on infrastructure investments that have a high multiplier impact, put people to work and repair and build needed infrastructure.

Bottom line: tax cuts and deregulation will probably not have the sustained economic impact and create the millions of high paying jobs that U.S. workers need. Investing in the right infrastructure projects is worth focusing on.